After finishing our quick visit to Huntsville, I had hoped to visit a couple more barbecue places in northeast Alabama, and so I used Google Maps to chart our way home. Then, unlike our “whatever happens” drive to Nashville the previous afternoon, I looked around Urbanspoon and hammered down two more places to try. This served as a “postscript,” if you like, for my “circumnavigation” of that state two weeks prior, hitting a few more places that I couldn’t have found at that time.

The first of these was a nice reminder of why I enjoy barbecue restaurants so very much. It is more than just the taste or the people, or the very real sense that, unlike just about any other food in America, no two places are anywhere even close to being the same, thanks to radically different recipes and preparation styles. If you’ll allow me to ramble, in many barbecue joints, there is a real sense of history, that businesses can and often do last long beyond the fickle finger of fashion. There is a trend that we all notice if we live in a cosmopolitan, world-class city like Atlanta – don’t you laugh; we’ve had two NHL teams – and keep an ear open for restaurant news and trends. Chefs get restless and bored and thrive on press and attention.

I think that it’s part of the semicelebrity culture, but the impression that I often get is that a chef – slash – owner’s attention lasts only as long as the rush of the crowd, or 27 months, tops. Oh, sure, there are exceptions – Hugh Acheson, for starters – but seriously, how many articles at the restaurant or real estate news blogs do you see in an average week that mention somebody notable opening up some new place, which also mention things like “Chef So-and-so, whose previous ventures include…” and then name some place that you always intended to go visit, but never did, and now it’s closed. It’s why, when, two months ago, three reputable blogs that I enjoy reported each others’ rumors that a presently-trendy eatery on Edgewood was soon to close – it hasn’t – I thought that would be a great shame, but I also wasn’t very surprised, either. That’s just how this business operates.

If barbecue places worked the same way, then this hobby would be radically different, and no fun at all. Take Atlanta’s Old Brick Pit, for instance. Once upon a time – the mid-seventies and into the early eighties – that place was nationally known. As restaurant critics and writers in cities like Chicago and New York finally stopped eating at places on the fortieth floors of downtown skyscrapers and ventured, blinking, into rural America to see what this “barbecue” that Calvin Trillin had spoken of was, Old Brick Pit and Harold’s were the places that the nationally-syndicated travel and culture writers visited when they came this way to learn about that peanut farmer who was running for president, and maybe see a game played by this town’s first NHL team. This wasn’t a flash in the pan; the newspaper-driven world sent thousands of travelers, tourists and locals to its door, in a way that small-audience bloggers and hobbyists like us can only dream about. An as-long-as-Blogger-still-exists Google link ain’t got nothing on a dozen mentions in The New York Times over five or six years.

In time, the Old Brick Pit’s reputation and fame faded. They still serve up some pretty good barbecue, albeit most probably not as good as it once was, but that business continues long after its time in the spotlight has faded. And that’s what I was reminded of as I enjoyed a terrific sandwich at a little shack called Mary’s Pit Bar-B-Que, somewhere between Gurley and Maysville, east of Huntsville out US-72. Once upon a time, this place was amazingly well known. A writer named Mike Kaylor befriended the Toney family in the early 1980s. Writing for the since-shuttered Atlanta Weekly, Kaylor wrote several articles about barbecue culture and road-tripping, in much the same way that we do today, and found many opportunities over the course of several years to single out Mary’s Pit Bar-B-Que for his audience. Looking about, I see traces of that still around. A blog whose writer should seriously be using Urbanspoon called The Great North Alabama BBQ Quest visited Mary’s late last year. This blog, incidentally, despite its quite limited scope, is one that I highly recommend. If it doesn’t make you want to spend a week around Huntsville just eating beyond your capacity, then there is something very, very badly wrong with you. 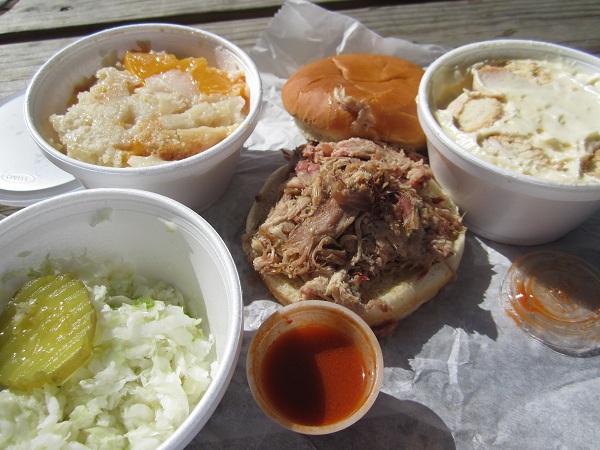 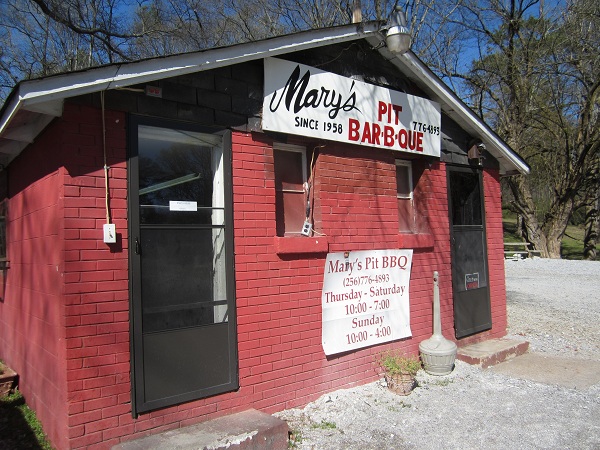 Mary Toney opened her restaurant in 1957. She and her then-husband felt that they needed a little help getting their preparation just right, so they called in the services of a man named Walter Jordan who was known, quite seriously, as the “Master of the Hickory Pit.” Mrs. Toney is still living, although the business is now managed by her younger son, Jeff. I happily thanked Jeff for a fine meal, because this was even better than the really good food that we had enjoyed a couple of hours earlier at Little Paul’s.

We ate at a picnic table outside. The shack has just a few bar stools and a counter inside, and a window in the back, as it’s principally, and unsurprisingly, a take-out joint. This was in sharp contrast to the meal we’d enjoyed about 24 hours previously at CBQ in Smyrna, where we were next to a smoker, between a car dealer and a traffic-packed highway. Here, we relaxed on a rural country lane, with a creek behind us and green, green grass all around. We let the baby put his feet in the grass and watched as he tried desperately to stand on Marie’s shoes instead. We also ate a little. The ladies were happy with their desserts, while I was taken with the crunchy and tangy vinegar slaw and the thin, hot sauce. This was an absolutely terrific little getaway that reminded me, in the best possible way, of all those fantastic little middle-of-nowhere joints around Athens, Georgia. If you seriously think that there’s a better way to spend a really nice, warm Saturday than with your family, eating barbecue outdoors, you are mistaken.

After our break, we returned to US-72 and continued east to Scottsboro. I had entirely forgotten, until we saw a billboard, that this is the home of the Unclaimed Baggage Depot, an enormous thrift store run by a company that buys freight after the airlines that have lost luggage have paid claims on it. Personally, I found it highly-priced and not even close to being like the weird and eccentric black hole that Roz Chast depicted in a fantastic comic strip that she did for The New Yorker – it’s reprinted in her collection Theories of Everything, which every library should own – but Marie and our daughter loved it and would have happily spent another four hours there, given the time. We’ve penciled in a return trip for them, in fact, which will give us an opportunity to try some of the other barbecue shacks in the community beyond the one that we visited, Tate’s. 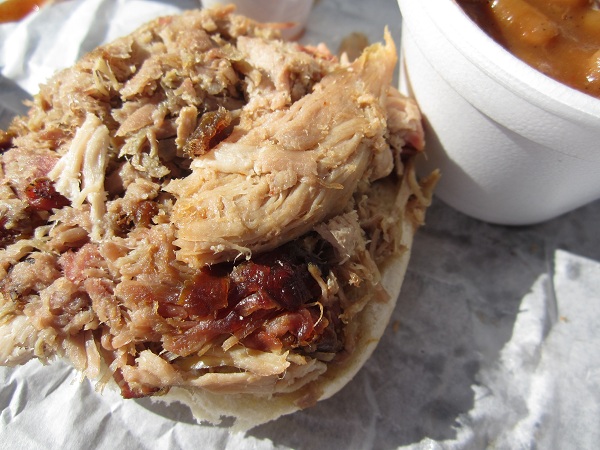 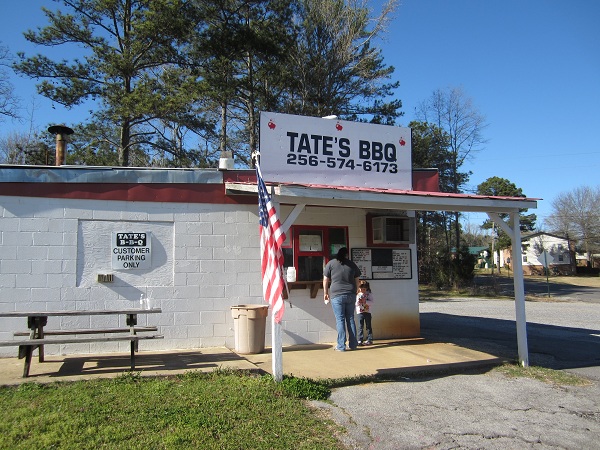 Tate’s was my fourth barbecue meal of the day – the ladies had now retired and waited impatiently for me to finish so that they could get their shopping going – and it was definitely the spiciest. In a moment of slapstick comedy, I spilled the tiny cup of thin vinegar-tomato sauce on the picnic table. The wood instantly soaked the vinegar right up, leaving the red peppery residue behind. It is also a take-out only place, the whole cinder block building being taken up by a kitchen. I was pleased that they offer Brunswick stew, and don’t make any silly claims about that Gibson fellow brewing it up.

I’m afraid that Mary’s was so darn good that Tate’s, not quite as smoky or as moist, could not help but compare unfavorably, but it was still a perfectly fine recipe, and the ladies who were working that day were incredibly friendly and nice. They pointed me in the direction of the Unclaimed Baggage Depot, and were sweet enough to give me more sauce after I acted like one of the Three Stooges on their picnic table.

The present plan is to return to Scottsboro in three weeks’ time and give Marie and our daughter many, many hours of shopping. We’ll see if I can’t come back with visits to another couple of barbecue places and dairy bars to share with all you trendy, cosmopolitan types.