Ever since we started this blog, I have wanted to go back to the great city of Huntsville and pay a visit. I had only been here once before – like millions of kids around the southeast, I took an overnight middle school field trip to the Space and Rocket Center – and did not really remember anything about the city. What we found was a very charming and busy region, with a run of sprawl south of the downtown area along US-231 that’s pretty ugly but also decently managed, with a limited access highway running in tandem with the light-controlled avenues beneath it. We visited on a day with gorgeous blue skies contrasting the ring of the southern Appalachians that border the urban area, and it just felt peaceful and relaxed and, honestly, didn’t show us a bad side. Huntsville is the home of a couple of minor, minor league sports teams and a hospital with a monorail, and it’s where some of Big Bob Gibson’s kinfolk have carried on his tradition with some interesting barbecue joints.

To be honest, this is an area that (again) needs more investigation and involvement than we were able to give it on a family trip, even one where we made five stops in Alabama before coming home. After a long breakfast in Nashville, we took I-65 south of that city for about an hour, and got off at exit 1. This took us through the twin towns of Ardmore, Tennessee and Ardmore, Alabama. It is pretty country up here, and I’m glad that we took these two-lane blacktops through these nice communities rather than staying on the interstate. Had we done so, we would have easily made our way to the original Big Bob Gibson’s in Decatur, and perhaps undertaken a more thorough sampling, but we entered Huntsville from the north instead, and tried some of the places that his nephews and great-grandchildren started instead.

I did learn one remarkable claim. It’s well documented that Gibson claimed the origination of white barbecue sauce for smoked chicken. I’ve not heard a particularly strong challenge to that story. But would you believe that he also seems to want to be the fellow who came up with Brunswick stew? 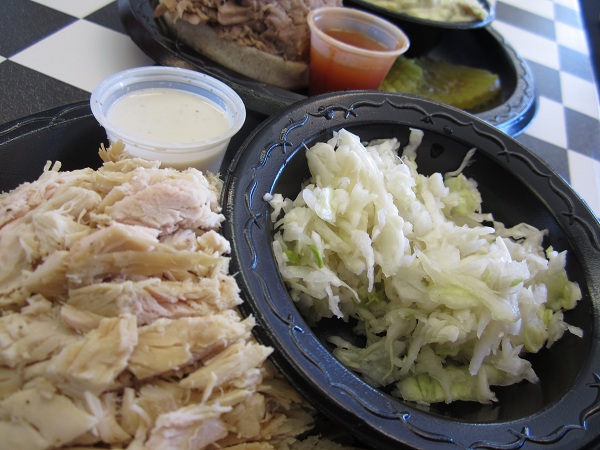 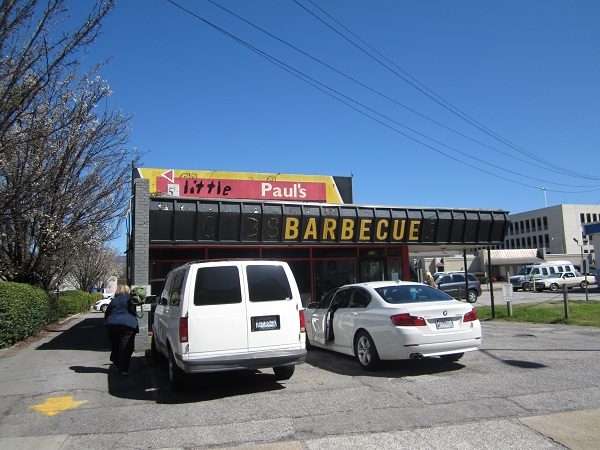 Let me skip forward a bit and explain that one of Bob Gibson’s daughters started a chain of Gibson’s barbecue restaurants in Huntsville, not stepping on his uncle’s toes in Decatur, where Big Bob Gibson’s restaurants rule the roost. It would appear that these are not as common as they once were, and I only spotted two of them – there were, at one time, four – on our visit. And apart from the Gibson’s chain, there is Little Paul’s, formerly “Little Paul Gibson’s.” Interestingly, the building, right across from a large hospital, was constructed as a pharmacy several decades ago before Gibson’s moved in. There’s a little plaque by the door commemorating its history. Paul Sanford, the great-grandson of Bob Gibson, and his family painted over the front when they moved in back in 2002, but a close look still shows the “labelscar” left behind by the old Gibson’s lettering when Sanford adapted the name of the restaurant.

Little Paul’s has a reputation as one of the most popular barbecue joints in town, attracting the attention of many bloggers, both locals and travelers, including Davwud’s Food Court, among others. Our visit found some darn solid food, prepared with lots of love and attention for a really busy Saturday crowd. I ordered the chopped chicken, hoping to sample the Gibson’s-pedigree sauce over the meat for which it was originally prepared, and was very pleased with it. The chicken was moist and juicy and the sauce was quite wonderful. I had it with some vinegar slaw that was out of this world. Interestingly, they prepare both vinegar slaw and more traditional creamy, mayo-based versions.

The most peculiar side available, however, is Brunswick stew. As I’ve commented before, very few barbecue places in Alabama offer this dish, and some of those that do, such as Real Pit in Greenville and Hog Rock in Wetumpka, call it “camp stew.” But my initial, pleasant surprise at seeing this on Little Paul’s menu was tempered by the suggestion that it is made from Big Bob Gibson’s original recipe. I asked the fellow at the register, and he “confirmed” that, yes, Gibson is the man who first concocted Brunswick stew. Well, not to put too fine a point on it, but that simply isn’t true.

I passed on Paul’s stew – like three or four disagreeable places in the Atlanta suburbs, it is not a “side,” but a separate, premium item – but when we made our way down to the second stop a little while later, they offered a lunch special of a sandwich, Brunswick stew and a drink. This was one of the two Gibson’s restaurants that are still in town. I picked it as it was the further of the two away from Little Paul’s. 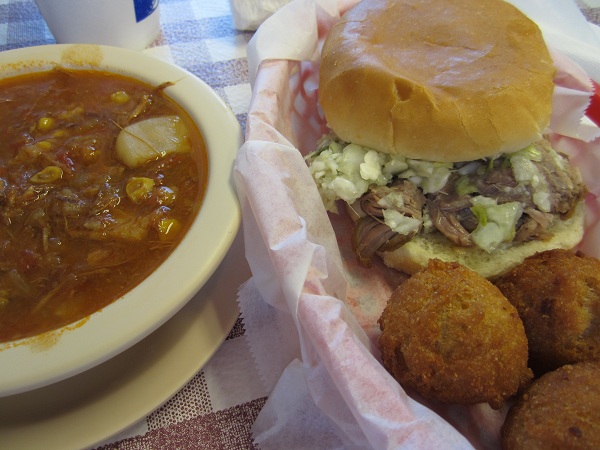 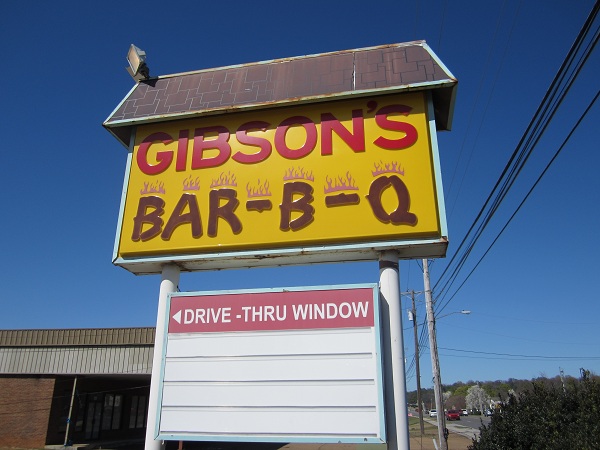 Actually, while there appear to be two “Gibson’s” in town, there are also two outposts of “Big Bob Gibson’s” and one store called “David Gibson’s,” plus Little Paul’s place. When we came through town, we passed by the Space and Rocket Center, awakening an interest that Marie had in visiting that she did not know that she possessed. Maybe one day, we can do that, and when we do, we should see whether we can tackle the town’s non-Gibson barbecue!

The Gibson’s that we visited was the one that other bloggers have not really written about. Huntsville’s two local writers – Dining Dragon (since closed?) and Huntsville Plate – have told us about the Gibson’s that we drove past. We went to the one on Whitesburg and, honestly, I didn’t enjoy it very much.

I did, on the other hand, appreciate just how interested the staff here was in telling me about the Gibson dynasty, and how they smoke their pork for twenty hours over hickory. The nice woman at the register was quick to debunk the claim of the cashier at Little Paul’s that Sanford’s great granddad invented Brunswick stew, which was nice. The white sauce was not bad and the stew, quite thin and packed full of meat and potatoes, tasted good, but the meat, sadly, tasted limp and tasted old. I’ll assume that this was just a bad day, but this was no way to carry on the legacy of such a big name in the region’s eating. Little Paul’s had the atmosphere and vibrancy of a new and exciting restaurant, and Gibson’s felt every one of its fifty-two years.

We were not entirely done with north Alabama. There was a little more barbecue to be had, and some interesting discoveries to be made as we made our way out of town on US-72, but more about that in the next chapter.

*Note: This entry was edited and revised on 12/19/14 to incorporate corrections provided by Paul Sanford in the comment below.

7 thoughts on “The Barbecue Dynasty of Huntsville AL”