It worked out that on our trip to Nashville, I had an appetizer at one restaurant, a main course at a second, and a dessert at a third. I think that I’d do that every evening if only I could.

We drove up on a Friday for two reasons. Mainly, we wanted to try the fish tacos at the popular Mas Tacos Por Favor, which we visited on our previous trip to Nashville and which are only available on Friday nights. A secondary consideration was dining on our way home the next day; more than half of the places that we ended up stopping that Saturday afternoon are closed on Sunday. We always have to bear that in mind when we are traveling.

Sadly, our friend Brooke, who wanted us to try these fish tacos, was called into work Friday evening and wasn’t able to indulge with us. They were every bit as good as Brooke suggested they’d be, and even better than the very good ones available down by us at Kennesaw’s Buckhead Burrito Company. They’re fried tilapia, underneath the restaurant’s usual mix of veggies, and served with a wonderfully tasty smear of spicy remoulade. Tory and I each had one, while my daughter had chicken and Marie had a side order of plantains. I also had the evening special of a cactus and chorizo taco, and darned if that wasn’t even better than the fish taco. Those two were a terrific way to start the evening. 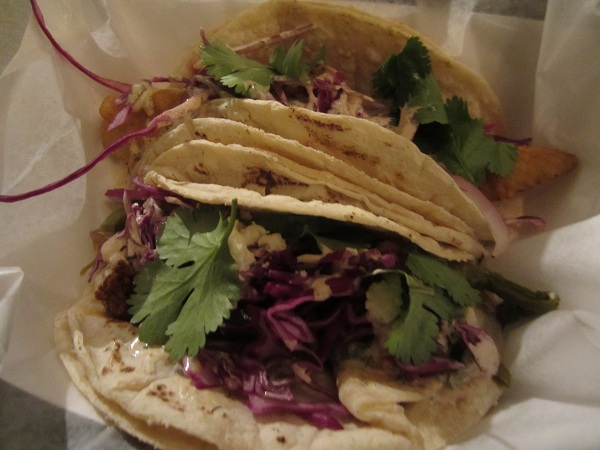 Marie and I have said before that the very best restaurants are the ones where the staff looks like they are having a terrific time, like there is not one thing that they would rather be doing than making food and serving guests. I’m hard pressed to think of any restaurant, in any town, where the crew is having as much of a blast as Mas Tacos’ employees and owner seem to be having. If some disgruntled employee wants to tell me I’m wrong, then I’ll tell that joe that they need to be in pictures, because they sure fooled us. The crew was backed up, having just finished a ridiculous carry-out order of a hundred tacos, and the short line in which we waited rapidly filled up behind us. To help out, guests in the line started passing orders from the window to people who had already grabbed tables. The place was a complete madhouse, and everybody there was having a ball.

As our seats were needed, we vacated our space just as soon as the last crumb was finished and made our way to Pepperfire, as recounted in the previous chapter. I had my “main course” here, while Tory, Marie and our daughter waited until the third location on our agenda for theirs. This would be the wonderful Pied Piper Eatery. Granted, I have not been to this Pharmacy that everybody in Music City is raving about, but until I am proved wrong, I think this is the home of the best burger in Nashville. But burgers were not on the agenda this evening; in celebration of the ongoing Festival of Dairy, Marie wanted the restaurant’s unbelievable grilled cheese sandwich. 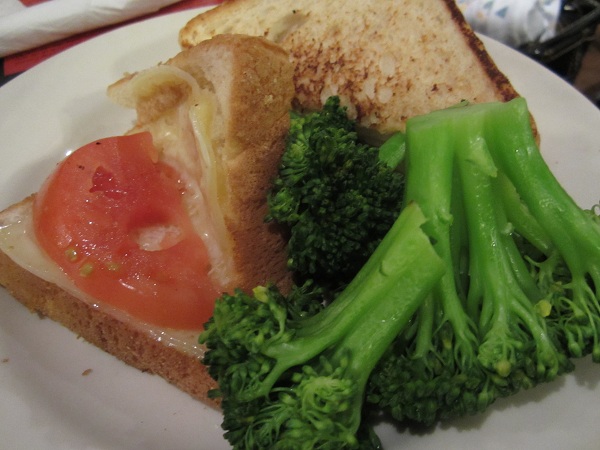 This indulgent little gem is still called the Clay Aiken, even after the Pied Piper has revamped their menu and I’m even less sure who the heck Clay Aiken was, other than “cheesy.” Seriously, when our grandchildren look to their version of Wikipedia, Mr. Aiken’s principal contribution will surely be “inspired the name of the best grilled cheese sandwich you ever had.” This place also has the best fried pickles in Tennessee, so I don’t know what the heck Marie was doing ordering broccoli with her meal.

Now, about their menu revamp: it is amazing. The menu is a “used LP” in a protective sleeve. Seriously, you get a 12-inch “record” with the food selections on both the A- and B-sides, an inner and an outer sleeve and a beat-up clear cover to keep the dust off your precious used vinyl. The designer of this menu deserves a medal. Even though I just had a simple milkshake, I read every letter of that package like I was looking for a special thanks credit for Steve Cropper.

We love the music theme at this restaurant, and sat at the Janis Joplin table. We told my teenage daughter that the last time we were at Pied Piper, so disagreeably long ago, we sat at the Culture Club table. She said that she didn’t know who that was, and so Tory, Marie and I all sang “Karma Chameleon” to her, very loudly. We’ve embarrassed that child before, and will surely do so again, but I don’t believe we’ll ever top the peak of mortification scaled with this effort. She curled her lips so tightly that she kissed the back of her throat before beating a hasty exit, not returning until her face returned to a healthy red glow.

3 thoughts on “Return Visits to Two Favorites in Nashville TN”