A couple of years ago, we were going to Scottsboro for the ladies to shop for electronics and I looked for something to eat while they were occupied. I found a place called Big Marv’s, drove over there, had my mind blown by the amazing food, and raved about it. Big Marv picked up some other fans on the strength of our story. Vincent and Helen, who drive back and forth between Huntsville and Atlanta a whole heck of a lot, found themselves making frequent detours to Scottsboro for pulled pork and ribs. And then he was gone, back to Tennessee. Helen fumed.

Big Marv is an aptly named fellow. He’s not called Little Marv. He speaks with a kindly, but very deep, rumbling voice and looks like he could break your car in two over his knee. I would sooner make an enemy out of a crocodile than this man. I talked with him about his decision to pull up stakes, and he explained that he and his wife moved to Scottsboro in 2011, but she was very unhappy there and wanted to move back to where they had been previously. Big Marv continued the hour and twenty minute commute for more than a year, because business was good, but that commute was taking a lot out of him. When this old game room and pool hall became available, only five minutes from their home, he took it. Good for him; he is prepping some excellent barbecue and deserves time off the road to talk with his neighbors and serve them great food. 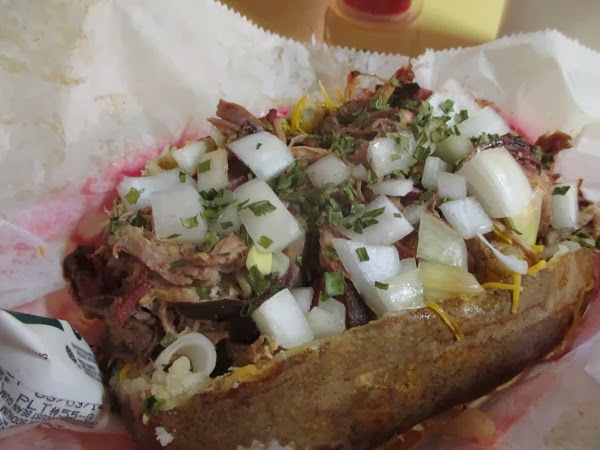 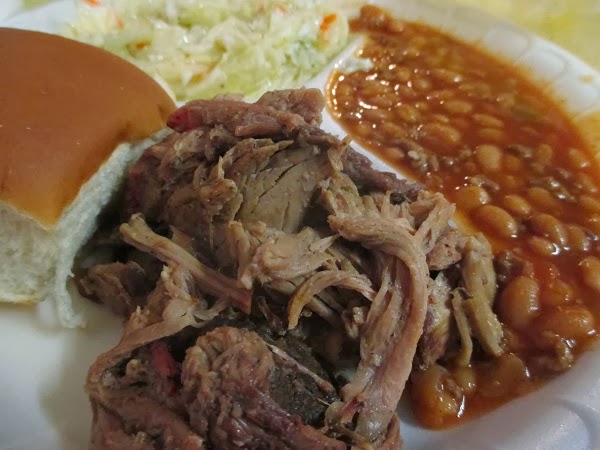 I had resolved to make this detour the next time the road took us to Nashville, and it’s a bit out of the way. From Chattanooga, you take I-24 over Monteagle and then go southwest on TN-50/US-64 around Decherd. Big Marv’s is on a very quiet stretch of the AEDC Road (named for the Arnold Engineering Development Complex at a nearby Air Force base) just north of town.

Helen and Vincent had told us that Big Marv’s brisket and ribs are even better than his pulled pork. I had the bright idea that the three of us would order all three, and share. Then the ladies rebelled and decided that they wanted loaded baked potatoes for some fool reason. They enjoyed them, and agreed that the pork was good, but I had to work around that without breaking the bank.

I had a pulled pork plate with vinegar slaw and beans, and a brisket sandwich. This was quite surprising. It was not at all like traditional Texas brisket. Granted, I’ve never had barbecue in Texas, but we’ve visited some really good joints closer to us that are run by Texans (including Moonie’s in Flowery Branch GA and Chuck Wagon in Huntsville AL) and most everybody else for two hundred miles makes their brisket in that fashion, smoked dry and chopped into bite-sized pieces. Big Marv’s brisket is more like pot roast, braised as seen in traditional Jewish cooking. It was not at all what I was expecting but it was delicious, and agreeably fatty. 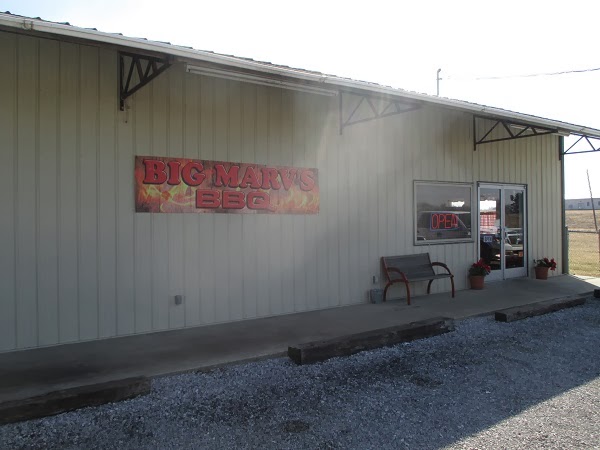 One slight downside was that this detour took forever. The toddler was pleased with the break, and extra pleased that there were video games that he thought that he was playing, but the teen girls who served us were incredibly, painfully slow. Travelers who don’t have to pull up a highchair for their littlest one can probably get much, much quicker service at the counter. I figured that the detour from exit 127 to exit 117 would be forty minutes plus the meal, but I didn’t figure on taking more than an hour for lunch. I’m impatient when traveling; we left late and already let the kid run around for a really long break at that rest area by Nickajack Lake. We ended up in Nashville at our friend Tory’s house an hour behind schedule. The next time that I let the road take me to try Big Marv’s extremely good pulled pork, I’ll resolve myself to a very long stop.