For a few years in the mid-1990s, Marie lived in an apartment complex in Athens called Tivoli, and then she moved across the street to another place. From either of her front doors, she could have hit the back side of the Cedar Shoals Guthrie’s with a tennis ball. Marie is an excellent cook and claims that, in the 1990s, she didn’t eat out all that much, but when she didn’t feel like cooking, the Guthrie’s was awfully close by and very tasty.

The original Guthrie’s opened in Alabama in 1965, and the company has maintained a slow and lackadaisical approach to expansion ever since. During the 1980s, the first one in Athens, on Baxter Street, was hugely popular on game day for both UGA and Clarke Central High. The second store, which opened in 1991, was selected to give Athens’ other high school, Cedar Shoals, the same Friday evening madness. Both thrived until some legal unpleasantness forced the abrupt closure of both stores. Other attempts to take off in Georgia have met with mixed results. There are two in the northwest corner of the state. Others, including one in Dunwoody that we enjoyed visiting (and wrote about in 2010), have shuttered.

As we zoomed down Cedar Shoals Drive, bound for the big play fort as we mentioned a couple of chapters back, Marie got a twinge of nostalgia for Guthrie’s chicken fingers. This developed into a craving that wasn’t going to leave her satisfied with anything else. She declined to have anything at Chub’s, and, even as we took the long way home, through Watkinsville, to stop by a friend’s place and pick up a borrowed laptop, she passed on anything there. I told her that we’d stop wherever she wanted on the way home. Winder, Lawrenceville, Buford Highway, whatever she’d like to eat. “I wish that Guthrie’s hadn’t closed,” she said, and I suddenly recalled that there was another store in the Atlanta suburbs. Food Near Snellville had stopped by and wrote about it in 2011. 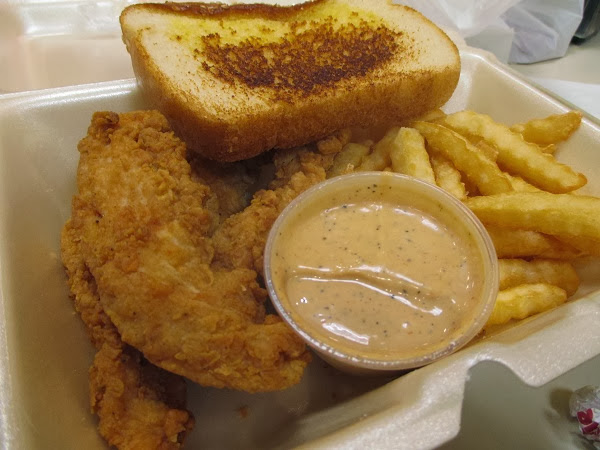 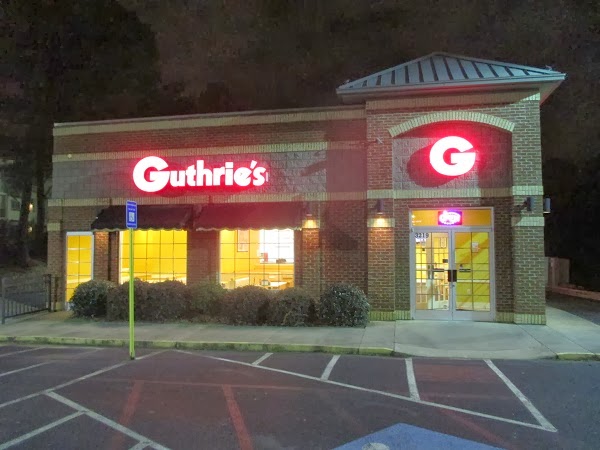 This Guthrie’s set up shop in a former Donato’s Pizza storefront. I want to say that I ate at this one once with our friend Matt, but I ate at a lot of Donato’s. That was good pizza. Anyway, we arrived well after dark, and not long before they closed. In fact, the kids working the place were a little less than gracious about having last minute customers. I told the fellow in charge not to worry, that we’d clear out quickly. That’s not the sort of conversation that anybody should have in a restaurant.

Well, the service was completely wretched, but Guthrie’s chicken fingers are still really tasty. The meat is incredibly tender and really juicy. I love their dipping sauce, which, legend holds, was concocted by the owner’s son at age ten. It tastes like it’s made with actual food and spices, and not just a cup of chemicals like you get at most of Guthrie’s competitors. We got enough fingers and fries to share, and Marie’s craving was satisfied with a smile.