Well, this is faintly ridiculous. I count at least five restaurants in middle Tennessee calling themselves Gondola Pizza House, in the towns of Cookeville (which has branded itself “The Original”), Crossville, Hermitage, McMinnville, and Tullahoma. I saw the sign for the Tullahoma store online someplace and insisted that we had to detour and visit it one day. Then I learned of the other stores, and phoned them, wondering whether they were ever part of a chain. Everybody with whom I spoke insisted that they were independent and were never affiliated with each other.

I’m also aware that there is a pizza chain with a confoundingly-similar name, Gondolier. There used to be one not far from us in Kennesaw, which has since closed, and one in Rome, which I visited in 1999 and which has also shut down, but there are seven other locations in Georgia, eight others in Florida, Kentucky, and North Carolina, and a whopping nineteen more in middle and eastern Tennessee. “The Original” Gondola in Cookeville opened in 1971, and the Tullahoma Gondola opened in 1974. Gondolier claims to have also started in 1974, in Cleveland, just northeast of Chattanooga.

Now come on. These things don’t happen in a vacuum. I think that some people on the telephone didn’t quite have the whole story. 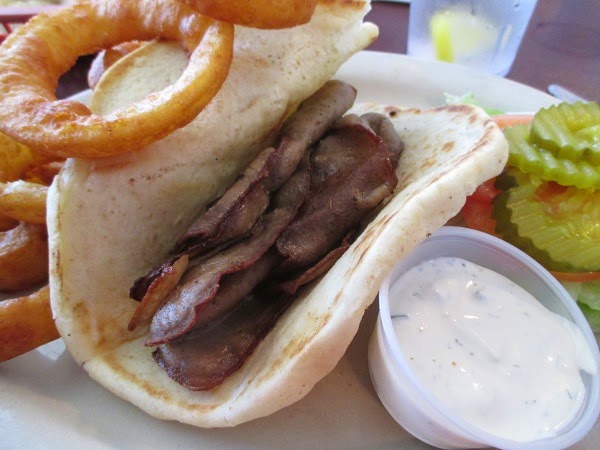 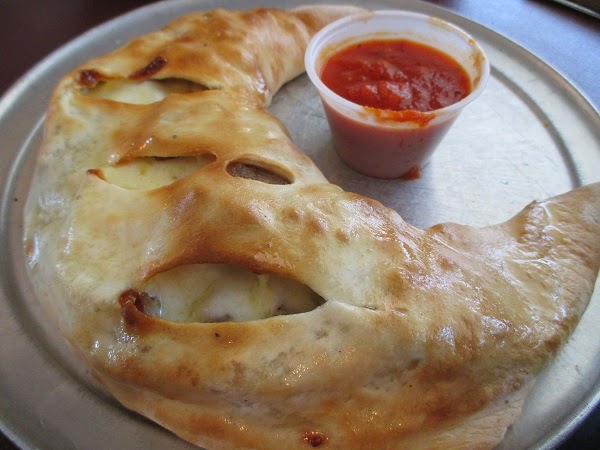 Well, anyway, perhaps I’ll get this cleared up, or perhaps not – your comments are very welcome! – but in the meantime, I’d like to share our experience at the Tullahoma location. Regular readers might have noticed that we’ve been stuck in Georgia for an awfully long time of late. We had some mammoth expenses in August, and so we postponed a few trips that we had planned, and cut back considerably on the in-state trips that we did take. Even this trip to Tennessee was a pretty sedate one since our wallet is still recovering. We didn’t eat our way across the state; we had a perfectly ordinary three meals a day like we would at home.

Our lovely friends Brooke and Matt were getting married in the Cedars of Lebanon State Park, and I figured that Tullahoma wouldn’t be too much of a detour. On our previous trip to Nashville back in March, we went southwest off I-24 after Monteagle to visit Big Marv’s BBQ in Decherd, and then came back to the interstate via a long highway that borders Arnold AFB. On this trip, we went southwest via that same AFB highway, and came back via US-231 at Murfreesboro. I think that I’ve now had my fill of zigzagging this way, and when we’re next in middle Tennessee (for hot chicken? Lots of it?), we’ll just roar straight to Nashville.

Anyway, I got the impression from online reviews that while the pizza at Gondola is hit or miss, some of their other menu items really shine. So we ordered a small plate of spaghetti, a gyro, onion rings, and a calzone stuffed with sausage, pepperoni, cheese, onions, and peppers for the four of us to share. This was more than enough food, and, apart from the onion rings, which were of the dreary food service variety and which I should have asked about up front, it was all quite good.

The gyro meat was perfectly seasoned, tender and full of flavor, and that calzone was excellent. Small towns like this, you’re probably not getting ingredients all that different from many other places in town, but the crust was so tasty, and it was just baked perfectly throughout. 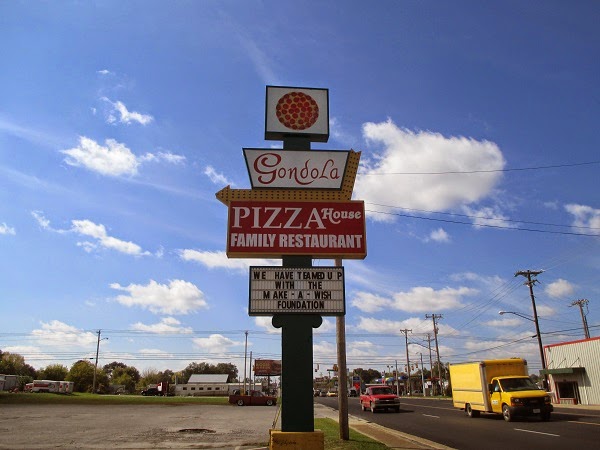 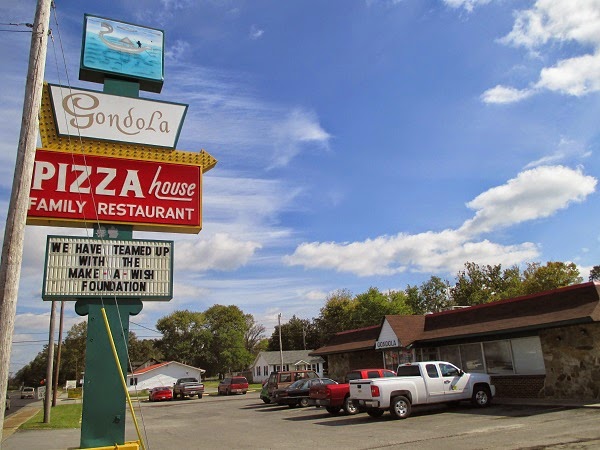 We noticed a couple of other older, Greek-Italian-American family restaurants on our way out of town (Rafael’s and Anthony’s), so I suppose that the local airmen really enjoy coming to this kind of big-menu, please-everybody place for a pretty nice meal when they get some time off base. This Gondola has been here, with that wonderful sign, since 1974. The service is excellent, the prices are reasonable, and the food might not have honestly been demanding a detour like the one that we took, but should the road take you to Tullahoma, it’s worth a stop.

What we did NOT notice on our way out of town was a fifty year-old fast food dairy bar called the Jiffy Dip. Tarnation. Despite what I wrote above about detours, I’m going to have to go back to Tullahoma one day and stop there. I can’t believe we missed that…