Since, apart from a curiosity about Iron Chef that lasted about two weeks, I have no interest in competition cooking television shows, I had never heard of Myron Mixon and his appearances on a program called BBQ Pitmasters until some bloggers who I read started talking about him some years after his first TV win. Where’s the Best BBQ? was the first to mention his restaurant in Braselton. (Unfortunately, Scot’s site has since closed.)

I let Mixon’s list of accomplishments flow in one ear and out the other, because trumpeting successes in that way never really means much to me. We enjoy the small local chain Cheeseburger Bobby’s a great deal, eat there as a family usually once a week, and wish them very well as they plan to open their first store inside the perimeter later this year. It doesn’t stop me snickering every time I see one of those billboards that reads VOTED BEST BURGER! That’s true. They were voted best burger. In Hiram.

So Jack’s Old South BBQ – curiously, this is the second time in a month I’ve visited a barbecue restaurant in Georgia called Jack’s – blows its horn about being a three-time world champion. I raised an eyebrow, because my mom says I’m really special, too. Then I read a little closer. Mixon has won Memphis in May three darn times. Shut my mouth; that really is impressive.

Mixon lives in Unadilla, and got his start beating off all the competition at the best-known Georgia barbecue cookoff, the Big Pig Jig in Vienna. He named his sauce and his rub after his father, and, apart from the Cree-Mee Dairy Bar, which I really do intend to visit one day, he’s probably the main reason to go visit Unadilla. He charges $750 a head for a sellout weekend-long cooking class. In 2009, he licensed a restaurant in Braselton, which is probably a good three hour drive from Unadilla, to use his trademarks and recipes, and sell his sauces, rubs, and T-shirts. This is the sort of corporate synergy that made me more and more skeptical the more I thought about it. This does not sound at all like the hands-on attention that will make for the best barbecue meals.

Then I had some of this pulled pork and had my mouth shut yet again. Jack’s Old South is doing its darnedest to prove me wrong at every opportunity. It is very good.

I arrived a little too late to take advantage of their lunch special, but the prices here are still pretty good, and they have one of those rare but incredibly welcome little extras that I love so much: a 5% discount if you’re paying at the counter with cash. I am always happy to pay for my meals with stamped Where’s George bills anyway. 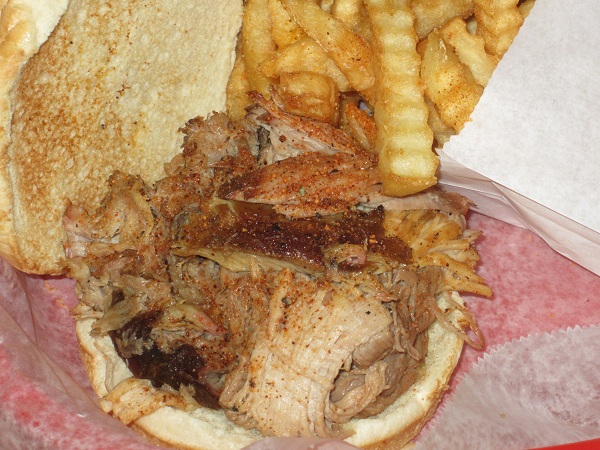 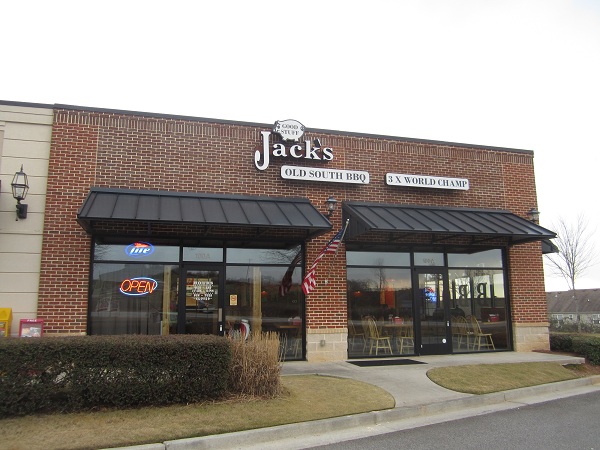 The menu is very small and simple. They don’t complicate things or try to please people who’ve come in a group but don’t like barbecue by offering burgers, salads, or chicken tenders. It’s just pulled pork, ribs, or smoked chicken breast in various combinations and five sides. They also offer the pulled pork over nachos, fries, or onion rings. I kept it simple and just had a sandwich and fries, and I enjoyed them both. The fries were just the basic crinkle cut variety, but given a dusting of a good mix of spices.

And speaking of spices, what Mixon has concocted – or perhaps more accurately, what Cliff Wright, the actual proprietor of this restaurant, has prepared – is really tasty. I apologize for the really horrible photograph above; the light inside was very low and it was darkening outside with a drizzle of rain, so that looks even worse than usual, but I wanted to show off just how dense the spice coat was, and that picture was the least awful of a very bad bunch. The pork was thoroughly dusted in the rub, far more so than most any place that comes to mind. The pork was peppery and tangy and not very dry. It had a good smoke flavor and did not need sauce, although there were three: a vinegar-tomato mix, a sweet black goo that I didn’t enjoy much, and a very good hot tomato-based sauce.

Not too many other bloggers have visited this place, but it seems that many people have come with the huge weight of expectations based on Mixon’s competition wins and left a little let down. Perhaps I was lucky in being skeptical about all that big talk, as I was not anticipating anything life-affirming. I left very pleased and enjoyed the stop a good deal. It makes me wish that I had a spare $750 so I could spend a weekend learning to cook with the guy.