One of the highlights of our trip to Ohio in December was our visit to Jungle Jim’s, the gigantic grocery store – slash – tourist mecca in the Cincinnati suburbs. There, we spent a good deal of vacation money in their soda aisle – sorry, their “pop” aisle – bringing back a few old favorites and getting several new things to sample.

I won’t claim that the Kutztown drink that we got was our favorite. That was actually the remarkable Jackson Hole Snake River Sarsaparilla, but the company that makes that wonderful drink doesn’t seem to have distribution in Georgia. But we were also mighty impressed with Kutztown’s excellent Birch Beer and went online to read a little more about the company.

Jeff and Dana Taylor bought the very old business, which was reincorporated five years before as Kutztown Soda Works, in 2007. It dates back to 1851 and was founded by Ed Immel, who sold flavored beverages and a variety of drinks both alcoholic and not, for 37 years. From then, it has changed hands many times, with one of its most interesting periods coming in the late 1920s, when Percy H. Keodinger, hamstrung by Prohibition rules, introduced the Birch Beer recipe to a line of fifteen other soda drinks. It’s not too sweet, and apparently the “triple-filtered carbonation” keeps the drink light. It’s just a perfect bottle of purple-black heaven.

The business is still located in its home of Kutztown, PA, and is sold nationwide, either at specialty shops like Jungle Jim’s or the Rocket Fizz chain, or at stores that cater to the Pennsylvania Dutch community. Kutztown’s list of shops that carry their beverages – currently ten varieties – is a long list of stores with “Yoder” in the name! I was pleased to see that there is a place about an hour north of us in Homer, David & Katie’s Amish Store, that carries these drinks. It’s about ten minutes north and west of the big outlet malls in Banks Crossing, and now you regular readers know why I was willing to drive the teenage girlchild to that particular outlet mall to shop. I had treats for myself just up the road. 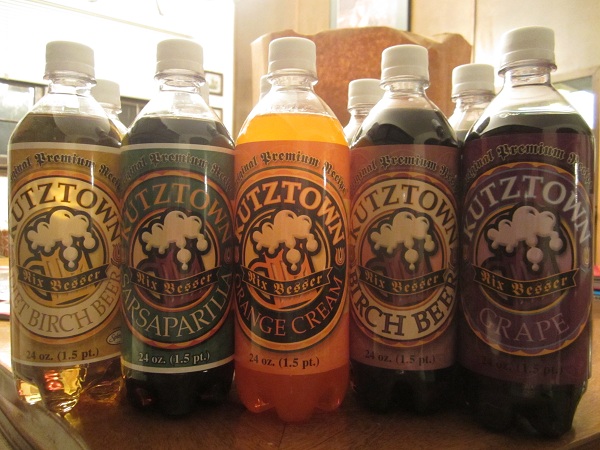 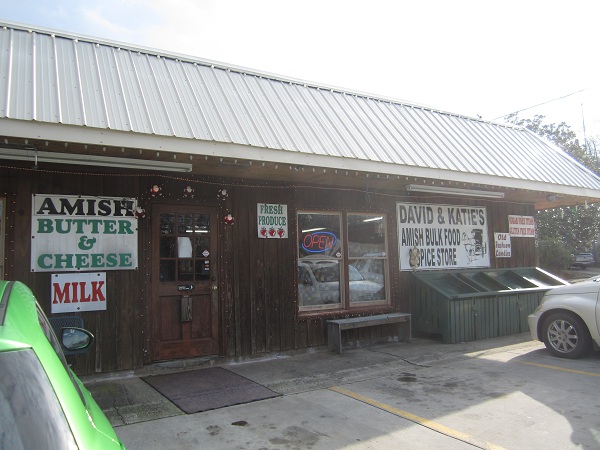 Kutztown’s ten flavors are Birch Beer (available as regular, “White” [clear], and diet), Sarsaparilla, Red Cream, Orange Cream, Root Beer, Grape, Black Cherry, and Ginger Beer, which is only available in the 12-ounce glass bottles. The smaller line of glass, as opposed to the 24-ounce plastic, does not currently include White, Grape, Orange Cream and Black Cherry. David and Katie’s sells just the 24-ounce line, and they had seven of the nine flavors in stock, along with the same sort of pleasing and nostalgia-minded small market sodas you see in many places: Bubble Up, Sioux City, Cool Mountain and the like.

It’s not just the fantastic taste that makes Kutztown so appealing, and nor is it the curious barely-anywhere distribution. (Having said that, of course, I can’t deny the pleasure of telling friends that there’s this terrific birch beer that they need to try, and they can get it at a little Amish store eighty miles out of town.) I just love the company’s spunk. Their soda labels include testimonials that are written in a mix of sales talk and rural Pennsylvania slang, such as “Ach now, don’t that drink good?” and “Why not drink yourself something different once?” and their slogan is “Nix besser!”

We’re opening a bottle to share at home every Sunday evening with supper and have had three. The Birch Beer is terrific, and so is the Orange Cream. The Sarsaparilla is even better, rich and very satisfying, and perfectly balanced. I was a little disappointed that David & Katie’s was out of the Black Cherry, but I’ll visit them again sometime soon. There are a couple more barbecue joints nearby that need visiting, and I’m sure the girlchild will want more outlet mall shopping.