If you read us regularly, you might recall that a month ago, when we visited Hickory Pig, I wrote that I had a notion to visit three more of the out-of-the-way places in the outlying towns that make up the Urbanspoon Gainesville “metro” area. The first of these was Smokin’ Gold, a joint that I had originally intended to visit along with the girlchild and the toddler back in January, a couple of hours after we had stopped at Big D’s, only to find the business closed for a two-week vacation. We spoke with Laurie Dieterle, who co-owns the restaurant with her husband Dan, who explained that while I was having my patience tried to the limit by trying to shop with my exasperating girlchild, they were on a cruise in Central America, and Dan was probably zip-lining over some Costa Rican jungle while I was pouting at their restaurant’s locked doors.

Five months later, and everything worked out much better. The girlchild shopped awesomely and bought sensible and well-fitting clothes at the outlet mall, and Smokin’ Gold was open and grilling up some excellent meat. The shtick at this little place is that while they smoke over hickory for part of the preparation time, the pork is finished over charcoal on a Big Green Egg. Well, I say little, but their dining room is probably about average-sized for this business. It’s just that as we arrived, the servers told us that they were about to have a party of 35 join them. It was some sort of car club, who promptly filled the dining room behind us and left the parking lot full of their terrifically maintained old motors. On that note, visitors to Dahlonega who wish to walk around and see the town should not park in Smokin’ Gold’s very small lot, but fight for street parking or find a public lot a couple of blocks away. 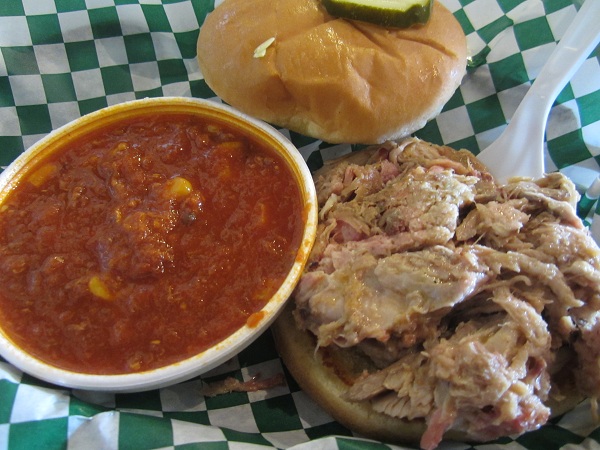 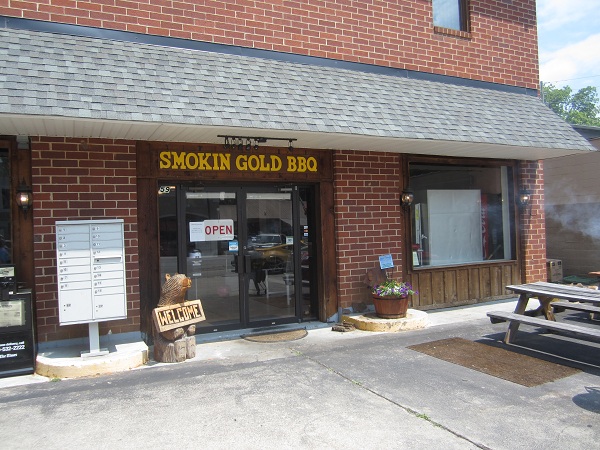 The barbecue was very tasty and I’m glad that we got to enjoy it after so long. This is pulled pork, and I think that perhaps locking it inside the Big Green Egg for the second part of its cooking life might help bring out these juices a little more. The meat is moist, but not steam tray moist, if you take my meaning. They do chicken and ribs as well, but we all stuck with pork, and also enjoyed some beans and some Brunswick stew. Unfortunately, the stew was the only disappointment of the trip. It’s possible for stew to be too tomatoey, and this was proof. Fire engine red in color, I’ll give them points for something unique, but any other ingredients were so smothered that it simply tasted like meat in a bowl of tomato soup.

They make a few sauces, but only keep a mildly sweet brown one on the tables. I also sampled their thin brown vinegar-based sauce. Each one went very well with the meat.

Smokin’ Gold is doing very well in its newer location. They moved to this space, about one building north of Dahlonega’s town square, 18 months ago after originally opening on the other side of the college in 2008. Mrs. Dieterle explained that since the huge tourist business is so much more focused on the central square, anybody in Dahlonega just has to get positioned closer in. There is a long waiting list among area businesses for one of the infrequently-abandoned spaces.

One that we noticed had been vacated since we were here in 2011 was then home to a terrific antiquarian bookstore called Quigley’s. Its space has been taken over by Giggle Monkey Toys, which is completely awesome. The toddler loved playing here for a few minutes. Next door is the amazing Paul Thomas Chocolates, where Marie succumbed to temptation and bought a single, huge, chocolate-covered marshmallow, suggesting that she might want to return. Habersham Wineries and Connie’s Ice Cream are also here on the square, which feels a lot like a slightly smaller version of Oxford, Mississippi. The next time the road takes us through this wonderful city, we’ll want to come with a few more twenties in our wallets, and while we might be more likely to try a new restaurant on that occasion, a sandwich from Smokin’ Gold wouldn’t be a bad idea at all.