In a chapter last week, I mentioned that I have a project in mind to cover a certain west Georgia barbecue corridor better than anybody else has done before. Another notion is to visit considerably more places in the Gainesville area than we have. Each of these are fairly doable, but there are just so many miles in the Urbanspoon Gainesville metro – the city of Gainesville itself is reasonably compact, but, as defined in Urbanspoon, it stretches across a lot more territory than you’d think, incorporating everyplace from Dahlonega to Helen to Hoschton – that it’s really difficult to trace a reasonable route to stop by the five places that I wanted to sample.

So I sat down with the map and thought about it and decided that this would best be done across two trips, the first focused in the city of Gainesville proper, and so Marie and I packed up the children and gassed up the car around 9.30. This jaunt would incorporate two of the five places that came to me with a little advance press. Hickory Pig BBQ is on the north side of town, most easily accessible from Atlanta by taking GA-400 past Dawsonville and across GA-136, Price Road. Hickory Pig got some considerable attention three years ago when Atlanta Magazine named it the best barbecue restaurant in the region. Evidently, somebody thinks that it has lost some luster; the annual barbecue issue is on newsstands at the time of writing and it is no longer ranked in the top ten.

Price is a deliciously twisty road. Marie had a map pulled up to help us navigate around a road closure somewhere between Canton and Dawsonville and zoomed in to see where we were going. Knowing how much I enjoy roads with lots and lots of curves, she said “You’re really going to like driving this,” and she wasn’t wrong. Price put us out on Thompson Bridge, and across the street from a new and modern shopping center anchored by a Kroger, Hickory Pig sits in a beautiful eyesore of a shack, thumbing its nose at the contemporary world.

The four of us made our way to the restaurant and met up with Matt and Kelley, who’d come up a few miles to join us, and we took over two-thirds of the space in the very small dining room. The owner, Phil Beaubian, and one of his employees then began shuttling food our way. “We’re very informal,” they said, as we shoved tables together and helped ourselves to drinks. 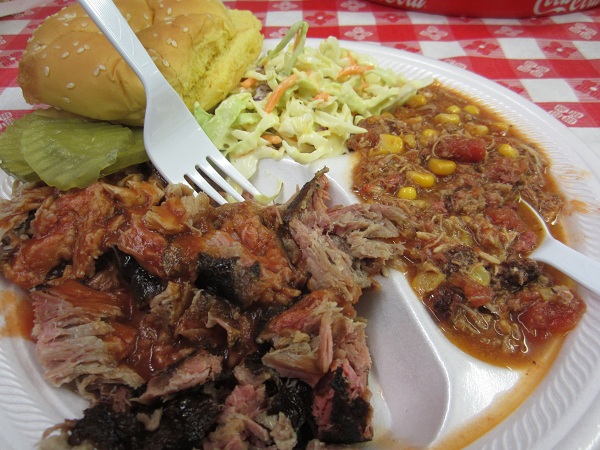 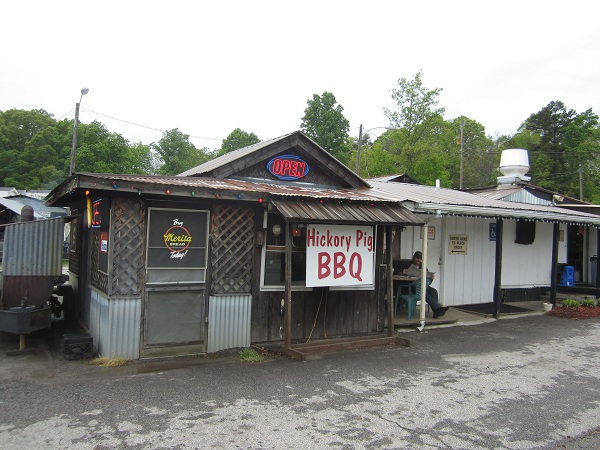 Bearing in mind that I often, too frequently, don’t get the chance to speak with a restaurant’s owner, I have enjoyed each and every opportunity that I have received to do so. Hanging out for a few minutes with Phil Beaubian, that’s in the top five. This guy is awesome. He is upbeat and animated and full of life and loves his job. You guys, you need to go meet this man. He opened Hickory Pig in the early 1990s and has been taking curious diners out back to look at his smoker as often as time allows him to. Sentences get derailed by passing thoughts, and he’s dragging you over to a wood pile. “Oh, and let me show you this!” He is a treasure.

For his smoker, he has jerry-rigged an interesting contraption. The wood is not directly underneath the meat as it smokes, where it can be spattered with dripping fat, but rather underneath and well to the side, in a rectangular vent that’s open to the elements. “I don’t cook with hickory,” he clarified, “because I cook with hickory and oxygen.” He went on to explain the dynamics of the setup, how it still allows the wood to impart its flavor to the meats, but also allows him better control over the temperature.

He also explained that while it’s almost always hickory burning in his smoker, he’ll occasionally mix in a little pecan. “I’d never say no to a free pecan tree,” he told me with a twinkle in his eye.

This results in very smoky and tender meat, served wet with a medium-thick tomato-based sauce. In all the congenial confusion of the very informal ordering process, I forgot to ask for mine dry, but didn’t mind much. I can’t stress enough how truly laid back this restaurant is. Phil and our server asked how many stews were coming out, and who wanted what kind of sandwich, and everybody at the table was happily munching on their meaty stew before I even got to clarify that I’d like a plate and not a sandwich. Then they overlooked that they’d already sent me a stew and didn’t mind.

Guests should make sure they bring cash, and don’t expect to provide any boss anywhere with an itemized receipt. “Call it thirty,” Phil said as we finished, which might well be the fairest price anybody has paid for a lunch this big for five people and a baby in the last ten years. Hickory Pig is a restaurant experience that’s really unique, and if you’re in north Georgia looking for barbecue, this needs to be on your shortlist.

Other blog posts about Hickory Pig: