In the previous chapter, I explained that there are five barbecue restaurants in the Gainesville area that I wanted to try, two of which had some prior press that I had noticed. The second of these was Rick’s Smokin’ Pig, which admittedly has not had very much hobbyist coverage – it has only been open for three years – but the hobbyist who brought it to my attention it was the indefatigable Chopped Onion. A fellow could eat very well just visiting the wonderful places that this site features*.

But in between the two barbecue stops that we made, we spent a couple of hours letting the toddler have a Baby Mercy Break at Gainesville’s children’s museum, which is called the Interactive Neighborhood for Kids (INK) and is set up in some reclaimed industrial space and is perfect for children who are in the “role-play” stage of their development. The setup is loosely like a main street, with little rooms along each side which become a grocery store, a diner, a bank, a hair salon, and so forth. I really liked the idea that children could go into the “bank” and pick up some laminated play money and use that in the other businesses. The layout stretches around a corner to a small cargo plane that children can pretend to pilot, with an airport waiting area for parents to kick back, and for kids to continue role play by handling ticket transactions.

After a couple of hours, we decided the toddler had enough play for the stop, and carried him out of there literally kicking and screaming, arms flailing and plaintively crying “AIR-PAIN! AIR-PAIN!” He was too little to go up to the mock FedEx plane when we visited the Children’s Museum of Memphis a year ago. It is a shame we will not be able to return to Memphis this year; that big thing would blow his mind.

I was quite peckish even if the ladies really weren’t, and so we made our way back into the sprawl of the business district, to John Morrow Parkway, and found Rick’s in a strip mall on the opposite side of a median. At two in the afternoon, this place was a little slow. We didn’t have it all to ourselves, but it was pretty close. 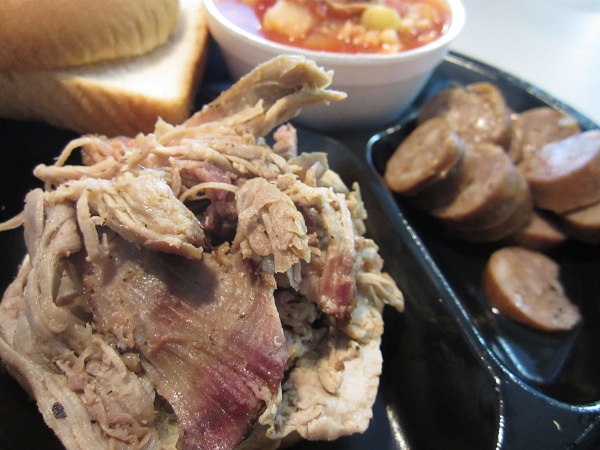 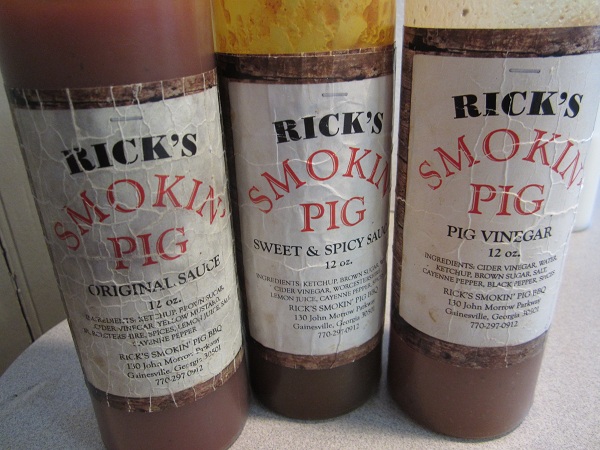 I understand that this is another case of a regular competition winner trying his luck at a restaurant location. Rick Shaw has been competing for a few years, and he had lots of handbills for the forthcoming Brenau BBQ Championship in and around the store. The menu looks pretty simple and basic, but there are a few neat little bonuses. They offer smoked pork, chicken, beef, or ribs, and they do hamburgers or hot dogs for the barbecue-phobic in your group. The fries are not hand-cut, but almost everything else is made in-house from family recipes.

There are three table sauces, and Rick has come up with some very different tastes from a very similar set of ingredients. They all start with ketchup, brown sugar, and cider vinegar, but go off in wildly different directions. The original is the typical medium-thick red sauce often seen in northeast Georgia, the sweet and spicy is browner, has a very nice kick, and was my favorite of the three, and the Pig Vinegar is a splashing pink Lexington-style sauce. 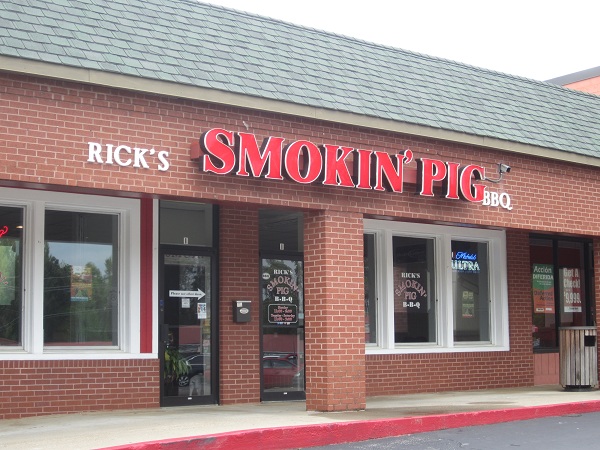 The pulled pork was really flavorful and satisfying. It is prepared in a smoker right out back of the strip mall over hickory wood, and apparently in smaller quantities than many others in the business, so guests thinking about coming here for supper or with a large group should probably phone ahead and reserve some. On that note, guests will definitely want to reserve some of this chili.

Both the chili and the Brunswick stew come from old family recipes, and sorry to say that I was not taken with the stew at all. I raise an eyebrow whenever I see potatoes in Brunswick stew anyway, but I’m like that. But never mind, just order the chili, prepared with three beans and five peppers and lots of perfectly seasoned ground beef. This chili is completely terrific, and I would happily gobble a much bigger portion of this than what the girlchild ordered with her meal. These two sides, along with the smoked sausage that I ordered, are priced just a little higher than the other sides on the menu. Normally, I balk a little at that, but it’s just a twenty-cent upcharge, which is perfectly reasonable.

The sausage was also really good. Sometimes they make it at the restaurant, but other times, like when we were there, they were working through an order of andouille that came from a place near New Orleans that Rick knows. He went to school at Tulane, which is where he also got the recipe for an astonishingly good bread pudding. You don’t see that on too many barbecue menus in Georgia. Usually, I don’t make much of a fuss over the dessert in a restaurant, unless we go out of our way to have some in particular somewhere. Well, when we head back to the Gainesville area to sample those other three places that I want to try, we may just have to swing back by when we come home via I-985 for some more of this bread pudding. But it sure would be a shame to not get some more of that chili while we’re here.

*Unintentional Foreshadowing Department: Be sure to be here on the 28th of this month, readers!

Like barbecue? You can see all of the the 200 – plus barbecue restaurants that we have visited for our blog on this map, with links back to the original blog posts. It’s terrific for anybody planning a barbecue road trip through the southeast!