When I worked in Alpharetta some years back, I used to occasionally enjoy lunch at Big D’s BBQ on Windward Parkway. They were only at that location for maybe eight months before joining the very, very long list of failed restaurants along that corridor and retreating northward to the growing sprawl around Dawsonville.

GA-400 is one of the northbound arteries out of Atlanta and into the mountains. There is a huge outlet mall up here, and, as in so many other communities, it’s dragged business away from the small town of Dawsonville and to the highway, where just about every national fast food joint that you can imagine is represented in an endless series of buildings. In the summer of 2010, Atlanta’s Varsity Jr. closed and the name was passed by the company to the newest location, up here. As the kids and I slowed with the traffic around the outlet mall, where my daughter had asked to shop, we saw that Varsity Jr. and I briefly thought about stopping. But first, we had other plans, and second, my daughter exclaimed “That Varsity has a children’s playground inside! That’s just wrong! Varsities shouldn’t have those!” It’s not often, but once in a while, I do get some evidence that I have raised her right.

No, the other plans were for barbecue, because we have a general idea that we’re going to do a better job in 2013 visiting those ‘cue places in north Georgia that have eluded us over the last three years of blogging. The plan had been to visit Big D’s and Dahlonega’s Smokin’ Gold on this adventure. Big D’s is very easy to find; coming from Atlanta, it is on the right at the intersection with GA-53, which is the first traffic light after the mall, and it is home to some really delicious barbecue. Buster’s Blogs visited back in 2009; it doesn’t look like any of this region’s other bloggers have come by, and I’m afraid this corridor is not really on the road maps of any barbecue lovers from other places who plan trips through our state, which means a whole lot of people are missing out. 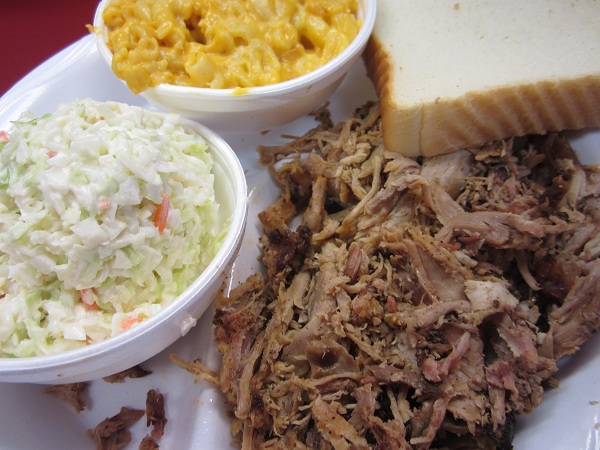 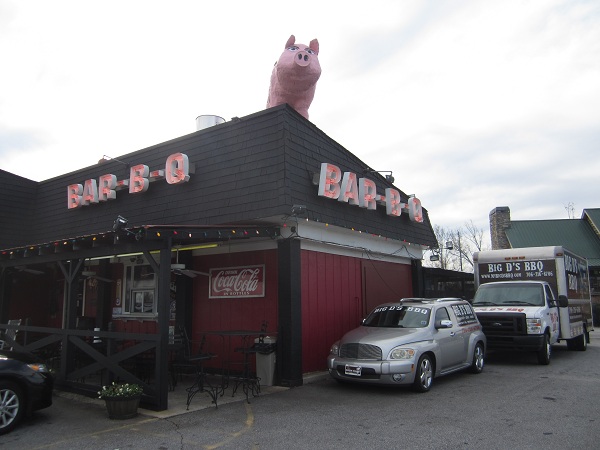 It had been such a long time since I visited their store in Alpharetta that I had forgotten how good this pork is. Smoked for fourteen hours over hickory, the pork is dry but not lacking in flavor. They give it a terrific spice rub and it comes out tasting very rich and smoky. I had a plate with cole slaw and mac and cheese to share with the baby. It’s difficult to know for sure, however, what with him not talking yet, but I think that he preferred the barbecue at Character’s the previous weekend, which he inhaled. This, he merely dabbed at. Then again, I did make the mistake of sharing my mac and cheese as well. Toddlers would rather eat mac and cheese than do anything.

My daughter had a big bowl of Brunswick stew and an order of fried pickles, enjoying both along with most of my slaw. Here’s the best way to control your portions, evidently; I had less than half of each of my sides! I didn’t mind; the pork was good enough to satisfy me. There are three table sauces: thick and sweet Memphis-style, thinner, more vinegary North Carolina-style, and a spicy dark yellow South Carolina mustard-style.

Big D’s has a pretty large menu of other things, although the barbecue here is so good I can’t understand why anybody would order any of it. They open every morning for breakfast, including a gluttonous challenge of five pounds of pancakes, and are very proud of their hamburgers. The owner, who grew up in eastern North Carolina, is a UNC fan and he offers up a Tarheel Burger, with cheese, bacon, slaw and vinegar sauce over a half-pound of ground beef. These sound interesting, but we’d have to live next door, and not, you know, an hour away, for me to get tired enough of the barbecue to want to try something else.

I was very happy to reacquaint myself with Big D’s, but not, perhaps, at the cost of my sanity. Taking my teenage girl shopping at the outlet mall was the living definition of frustrating madness for a whole pile of reasons, only about two-thirds of which are related to the stereotypical view of teenage girls and malls. By the time the nightmare ended and we left that fool place, I was really, really looking forward to some more barbecue, but I was denied.

We got to Dahlonega only to find that Smokin’ Gold was on vacation and closed for another week and a half. Even my backup plan was stymied: the town’s Yonah Burger has shut down, its space taken over by a Papa John’s Pizza. Instead, we parked and returned to Connie’s Ice Cream Parlor, which we’d visited in April of 2010. We enjoyed a couple of bottled sodas – Double Cola and Cool Mountain Blue Razzberry – and just did some people-watching and window shopping before getting back on the road and heading east to meet up with our friend Matt for a snack.