If readers will forgive a little boasting when we usually strive for a little humility and, particularly where our fumbling photography is concerned, forgiveness, today’s entry is quite a milestone for us. The Rib Ranch is the 200th barbecue restaurant that we have featured at our blog. We’ve a long ways to go before scaling the dizzy heights of some of those Texas-based barbecue blogs – the astonishing Full Custom Gospel BBQ has three times as many, but also a four-year head start – but we are quite proud to have visited and photographed and presented so many places.

For our 200th BBQ trip, we went to one that we’ve been saving for a rainy day, the one that is actually the closest to our house. On a Friday earlier this month, all the stars lined up and it made sense to finally come back to the Rib Ranch. I’ve eaten here many times before we began the blog, and know that it’s a reliable and good restaurant. I first visited in the late nineties, back when we used the Yellow Pages to find new-to-us barbecue restaurants in Atlanta.

Back then, there were three Rib Ranches, but a change in ownership left the other two locations, in Buckhead and in Alpharetta, trading under the new name One Star Ranch. The store inside the perimeter is still hanging in there, but the Alpharetta one closed a couple of years ago. When I worked on Windward Parkway and felt like barbecue for lunch, I alternated between One Star and the short-lived second location of Big D’s. 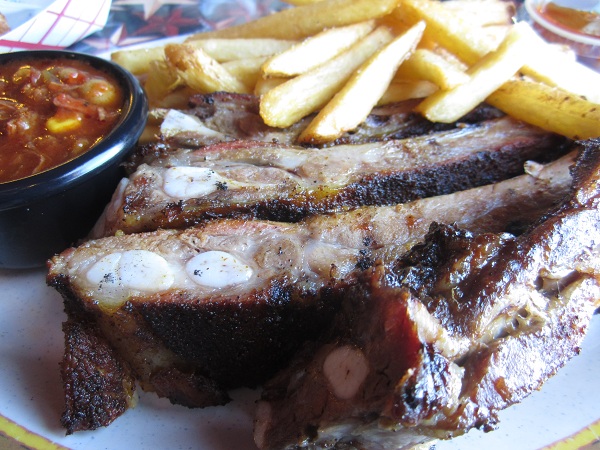 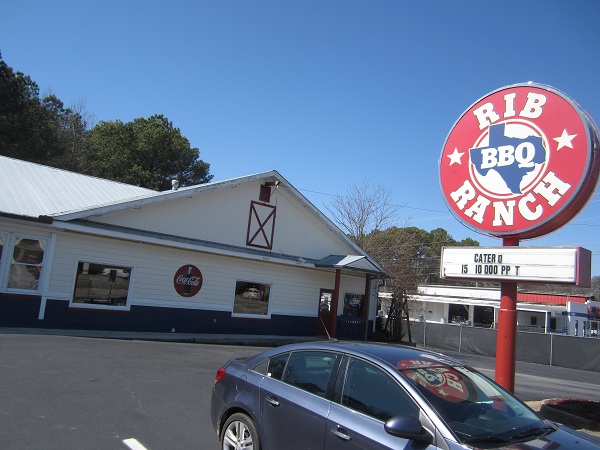 The focus here is on Texas-style ribs, pork and beef. They also smoke sausage, and, once upon a time, turkey. They also serve up a mean bowl of chili. I love the wording on the menu, which explains that anybody who knows beans about chili knows there aren’t any beans in Texas chili. There’s only one sauce, a thick brown one that is mildly sweet with molasses.

Marie and I enjoyed a quiet lunch by ourselves at the end of the lunch rush, in between errands. She ordered the “Texato” – a baked potato stuffed with pulled pork – and I had a small order of ribs, with fries and a nicely spiced Brunswick stew. I had my ribs dry – well, dry-ish – and they were smoky and peppery and downright excellent. For just under ten bucks, you get four excellent, meaty bones and two sides, more than enough to put a fellow in a food coma.

I was happy to tilt my head back and let the smoky taste of the ribs linger while considering all of the silly Texas kitsch and bric-a-brac on the walls, but Marie was keen on dessert and tried a hot fudge brownie, which she loved. I accepted her offer of a bite, expecting the cool taste of cold chocolate syrup instead of piping hot brown goo. That was an unpleasant surprise. 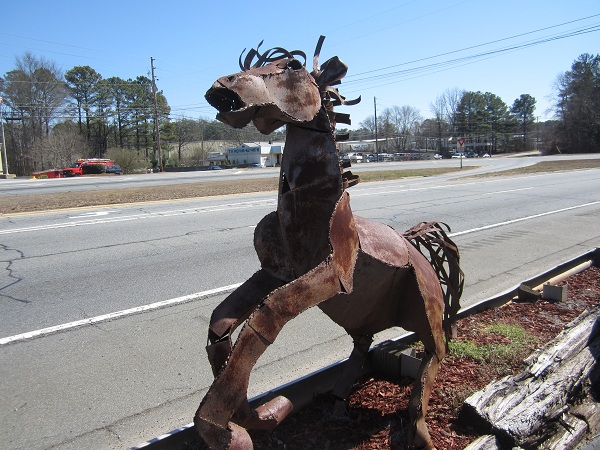 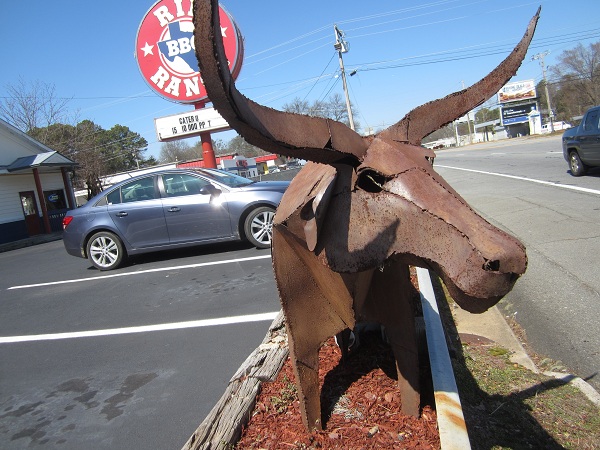 The Rib Ranch packs in a huge crowd for lunches, each of whom, like me, probably also jumps out of their skin when the heavy door slams shut behind them. They manage a large and loyal clientele despite one of the worst locations of any suburban restaurant anywhere, on the inside of a blind curve, and separated from the northbound lanes by a median. Exiting onto this curve and turning around to go north is no darn fun at all. Once upon a time, there was a fabulous back way out of the restaurant and into the sprawling neighborhood behind it, but the owner got so tired of residents using the parking lot as a cut-through that he fenced it off.

On the other hand, the restaurant does have these terrific metal animals on the curve. It’s slightly terrifying to stand so close to the traffic and try to shoot them, but in the absence of a chance for some good exercise after lunch, a little adrenaline rush is probably good for the system.