Last week, when I was talking about Chai Pani, I referenced the upscale presentation of the typical Indian restaurant that we most often see in America, the tuxedo-n-curry type of business. I hope that I was very clear that my statements in no way belittled the food itself, which is frequently very good, but expressed a malaise with the tedious predictability of the dining experience, from knowing what you’ll find on the menu to what you’ll see on the walls, to what you’ll hear played over the PA system: polite, unthreatening, softly played music, the sort of gentle sitar pieces, occasionally with plaintive vocal accompaniment, that you might hear while getting a massage. This is why the raucous and joyful cacaphony that we now associate with Bollywood soundtracks was such a pleasant surprise to me; at least two generations in this country were convinced that all Indian music sounds like Ravi Shankar and his pals tuning their instruments at the start of the Concert for Bangla Desh, when there was so much more to learn.

Now, with Himalayan Spice, which opened in December in one of the strip malls at the intersection of Clairmont and Briarcliff, we’re stepping away from the rock and roll of Chai Pani and back into the tuxedo-n-curry school. This is a very nice restaurant that has already marked out a position as a host for important parties and family banquets in their large private rooms, although the staff, mercifully, is not made to dress in those same moth-eaten tuxedos that I keep mocking. It’s a very reasonably priced dinner in a nice restaurant, with the music turned down low enough that friends can converse without yelling, and while the menu features many familiar – or, perhaps, over-familiar – dishes, they have a neat ace up their sleeve. This isn’t just another north Indian restaurant; it’s also happy to offer Nepalese dishes as well. 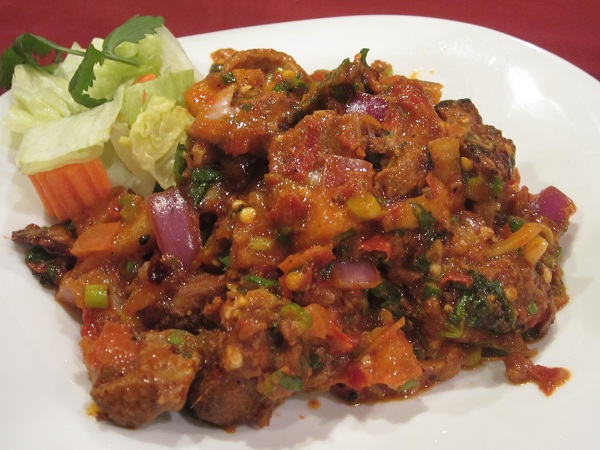 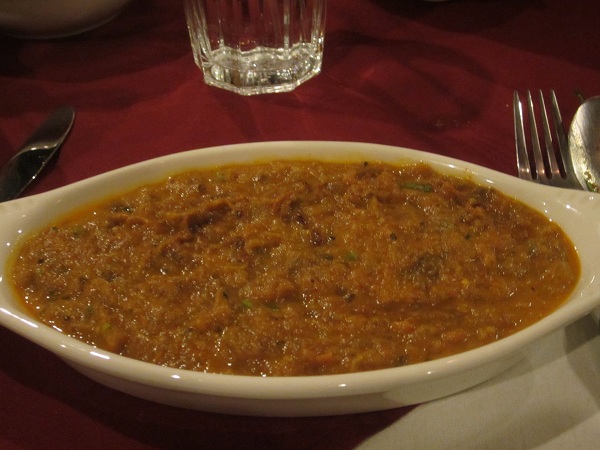 Again, referring back to the Chai Pani chapter, it was not just my daughter who concluded, wrongly, that she disliked Indian food based on a subpar tuxedo-n-curry experience; regular readers have no doubt noticed that Marie has been mostly absent from my trips to all these great restaurants. She hasn’t really enjoyed the meals that she’s tried over the years, finding them overpowered with spices and thick gravy, and politely focused on other things instead. So when Helen and Vincent were in town and we were thinking about some place new to try, I crossed my fingers and hoped for the best from Himalayan Spice.

We started with three very enjoyable appetizers. Choila (also spelled Chwelaa) was one of the Nepalese dishes that we tried. This was grilled lamb cooked in a really spicy marinade and served in small chunks with a popping red onion, cilantro and garlic. In Nepal, this dish is typically made with water buffalo, but I guess that’s a little hard to source here. We also had some veggie samosas and a small plate of Chicken 65. I’d only had this dish once before, at Zyka. Himalayan Spice’s version is cooked in a stickier sauce, and the end result is not much like Zyka’s awesome red-colored chicken tenders, but still really good. 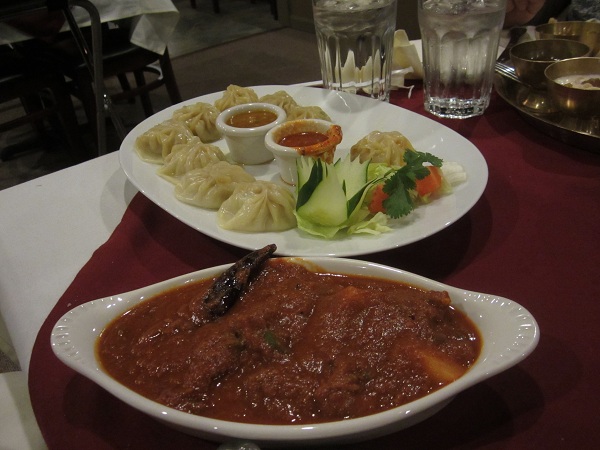 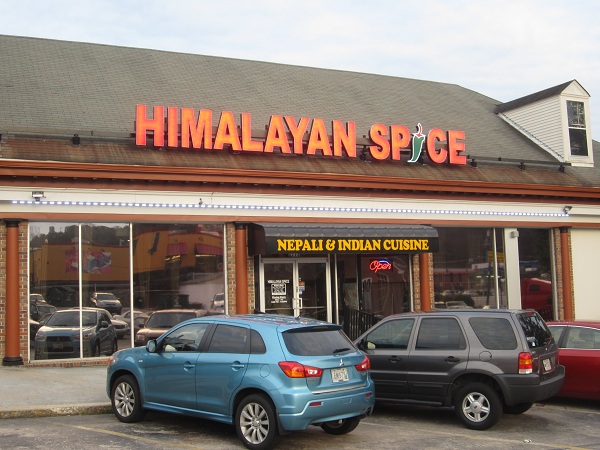 There was much more to come. Marie, erring on the side of caution, ordered the chicken saag, which is your basic creamy chicken and spinach offering as seen in many similar restaurants, and I’m afraid that she still didn’t like it very much. No matter! I had an eggplant dish called Baigan Bharta that was served in an excellent tomato and onion sauce, and I liked it enough for both of us. Vincent ordered a thali platter with goat, lentil soup, and several vegetables along with some rice pudding, all of which was great, and Helen had lamb vindaloo. This was made with a really curious mix of spices. My initial impression, with my tongue still popping from the choila, was that it was quite spicy, but we had to conclude that I was mistaken and still feeling the other dish’s heat. It was not bad, and its nasal-clearing properties were no mistake on my part, but Helen was hoping for something much hotter.

We also had a round of dumplings called Mo:mo for the table. These were similar to the doughy dumplings that we’ve seen at a few Buford Highway restaurants, and were filled with chicken and served with two dipping sauces, one red and one orange, both pretty hot.

Marie was a really good sport, but she simply doesn’t love these flavors and spices like I do. I thought the meal was splendid in every way, and would not mind coming back for more. In point of fact, we will be back at this strip mall fairly soon, because there are some Ethopian restaurants just a few doors down in every direction, and we’ve put off sampling this cuisine long enough. We hope to be breaking injera with friends nearby very soon. At least we got to enjoy a long dinner with friends without the baby insisting that he was ready to leave! Hooray for grandmothers who like to babysit!

Other blog posts about Himalayan Spice: