So the road took us back to Tennessee for a couple of days. Marie had some time off and wanted to visit her family, and I didn’t quite have the hours accrued to take the days that she wanted, so instead, she took the baby and went south, and I took the girlchild and went north. I even did the good deed, perhaps, of ringing the girlchild’s mother and offering to let the two of ’em have a few hours together.

We timed the trip so that we would get to Murfreesboro in the late morning so to start the day with an early lunch. I had hoped to visit an old place called Pope Taylor’s. Last year, when I was looking for additional links for my story about that city’s Slick Pig, I found a site called Ulika BBQ, which has done an excellent job covering the barbecue offerings around Tennessee’s capital city. In their chapter about Murfreesboro, they included a couple of pictures of Pope’s, and I was really charmed by them. Unfortunately, despite a long history and lots of fans – Styx’s Tommy Shaw was said to be among them – I learned a couple of days before we left that Pope Taylor’s had closed a few months ago. After we ate, we drove past the listed address, and couldn’t find any evidence of the building at all, not even that wonderful Dr. Pepper-branded sign that Ulika had shot.

To make up for the loss, I had rescheduled and got new directions and we instead pulled into Rick’s right as they got ready to greet guests. This is a small chain with seven locations in Tennessee and Alabama. Rick Lanning opened the original store in the town of Leoma – in the southern central part of the state, west of I-65 – in 1979. That store closed twenty years later, but Rick’s had been transitioning into a larger operation with a big wholesale arm, in the meantime. He’d opened four stores and was slowly building grocery accounts for his pork and sauce. A new store opened in Leoma in 2005, and this M-boro store, conveniently located near the interstate and franchised out for Rick’s brother Mike to run, followed in 2008. 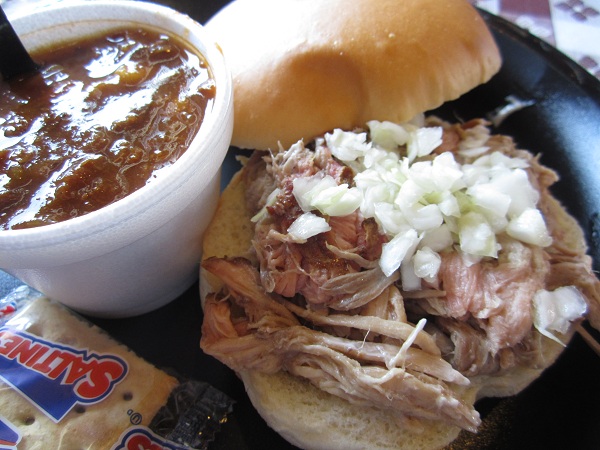 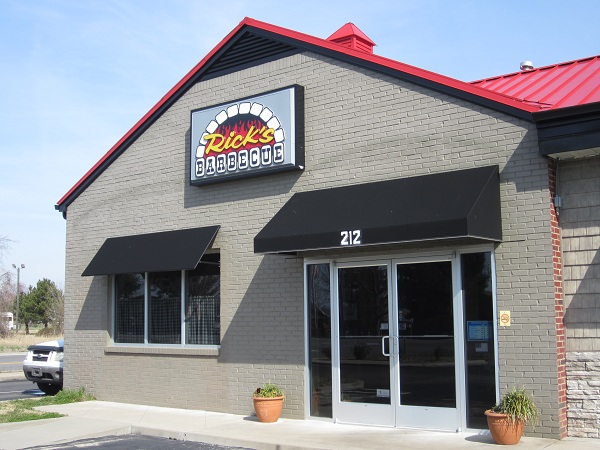 If you’re familiar with the region of central Tennessee and northern Alabama, you might have noticed that Rick’s covers much of the same ground as a large regional rival, Whitt’s, which opened in the Nashville suburb of Antioch in 1969* and has focused more on opening stores than in the profitable wholesale arm that Rick’s has developed. There’s another similarity in that neither chain gets much interest or curiosity from barbecue bloggers, and online reviews for each are rarely glowing. I think that I might give Whitt’s original location a try one of these days; I’m impressed by their growth and I am curious about small barbecue chains like this, or Alabama’s Golden Rule, middle Georgia’s Country’s, or Buddy’s around Knoxville. I also think that I might swing by another Rick’s store one day; perhaps one of the Alabama locations that is not franchised out to family, and where white sauce may be obtained, might be a more satisfying stop.

This is a lot of talking to mask the reality that the girlchild and I were not overly impressed by the meal here. It was not bad, and we’ve certainly had worse, but we’ve had lots better as well. I think my snobbish perception filter was activated by the big, bright menu, which prominently displayed the logos for Lay’s and Pepsi for each and every numbered combo meal. Yes, that’s incredibly snobbish for me to say when one of the things that had me wanting to stop at Pope Taylor’s was that 1960s-era Dr. Pepper-branded sign, but the overkill and the commercial photography made this place just look corporate and bland.

The food was honestly a little better than I was expecting after that sinking feeling. The stew was dark and meaty and quite good, and I liked the novelty of having the sandwich served not just with slaw and a pickle, but a good smear of mayonnaise as well.

In the end, though, that is all that it was: a novelty. What’s more, it’s not a particularly original one. I looked around and saw very little commentary about Rick’s, but, helpfully, Ulika BBQ had indeed written about them as well several years ago. The mayo-slaw-pickle recipe is the signature of a Whitt’s sandwich, and has also been copied by another local chain, Stroud’s. I won’t go so far as to agree with Ulika that the result is “quite mediocre,” but it certainly didn’t taste like smoke. It was just inoffensive and mild meat, not flavorless however, with an unusual regional flourish.

Actually, the biggest disappointment came with the sauces. I wonder why these stores don’t also have white Alabama-style sauce on the table, like the stores in Muscle Shoals and Florence are said to do? The ones available tasted full of preservatives and chemicals, no different from anything that’s been sitting on your grocer’s shelf for months. One’s a sweet brown sauce that might as well be K.C. Masterpiece, and one’s a redder hot sauce that might as well be Texas Pete.

We left and agreed that wasn’t bad, but there’s no way I’ll believe anybody spreading gossip about how much Tommy Shaw would’ve liked this place. And I don’t even like Styx.

*This may not be accurate, but this is what an employee at the Antioch location told me when I phoned to check. If anybody can correct or confirm this, please do so in the comments.