On one of those whirlwind tours around Nashville that I experienced from the back seat of one of my friends’ cars in the early 2000s, we whizzed past San Antonio Taco Company and I said that I must try them one day. It took me a few years, and while I was never a regular, I ate there three or four times before we began blogging. It is a fun and very busy place that goes a small way toward remedying the inescapable reality of being a Vanderbilt undergrad. Nashville isn’t a college town. There’s no culture here, like you see in Oxford or Athens, of small, quirky, inexpensive places for college students to go off campus and eat dirt cheap. Well, there’s a stretch a little down the road in the Belcourt neighborhood, where Pancake Pantry is, that almost feels right, but on the north end of campus, there’s Rotier’s and Hog Heaven and the Ellison Place Soda Shop going one direction, and this place and Noshville on another, but it’s all spread out across very busy roads and punctuated by lots of national chains.

In fact, right next door to SATCO, as it’s called, there’s a Panera Bread with the largest parking lot of any Panera Bread in the country. And it’s patrolled by a guard who has the thankless job of shooing out the ninety-odd people every lunch rush who attempt to park here and walk next door for a taco. That poor fellow. Panera should pay him in gold. Or, you know, give up a dozen spaces and quit being such unbelievable jerks.

SATCO originally opened in 1984. Two former San Antonio residents who graduated from Vandy started the place, and sold it to the next present owners, also Commodores, six years later. They have been packing the deck with students and workers who saunter down from their Music Row offices, and when my daughter and I arrived on this gorgeous spring afternoon for a snack, we had to sit inside, where it’s much noisier. 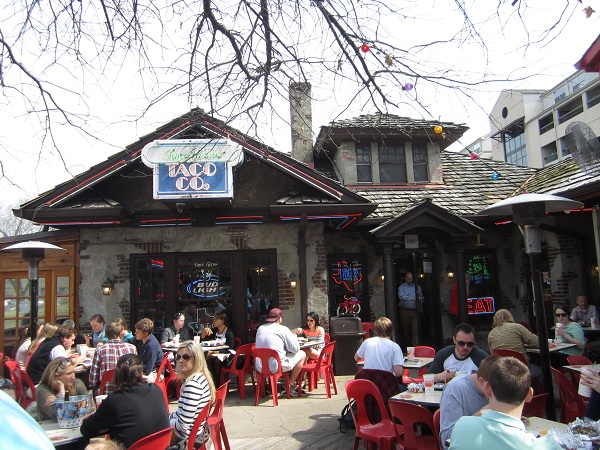 This restaurant falls into the baby-unfriendly category. I would honestly not take a toddler here. It is a crowded, loud madhouse. It requires a wait, gets a little blustery inside, and heaven help you if you need to change a diaper; you’ll have to hike back to the pay lot for that, because the restrooms are like broom closets. (About which, Central Parking, I really don’t appreciate the bait-and-switch. Advertising $1 for 15 minutes is fine, since I figured we’d need to pay $3 for 45 minutes. Then when you get to the kiosk, you see that’s not an option. It’s either $1 for 15, or $6 for an hour. Panera doesn’t pay their guard enough to put up with surly drivers. You guys get paid too darn much.)

Anyway, if guests arrive on a busy afternoon, they may wait on the deck for a moment until the line indoors starts moving. Along the walls, there are menu pads and pencils for guests to make their selections and circle the additional toppings. Selections here are very simple, basically your choice of either Tex-Mex fajita-style grilled meat, or refried beans and cheese, on freshly-made tortillas, or California-Mex seasoned ground beef, lettuce and cheese. The sheets don’t list the prices, but once you make it to the register to clarify any points with the cashier, you’ll be able to see that the tacos run between $1.19 to $2 and change, with an extra quarter for each topping.

Since this was just a snack, the girlchild and I each got two tacos. Yes, I did attempt to photograph them, but, not for the first time, the results were so unspeakably ugly that I’d have a comment from the owners begging me to delete the shot before I killed the business, so there’s just the one of the crowded deck above. This isn’t pretty food; it’s rush-assembled by a well-oiled and efficient team trying to keep a line moving. Employees here have a negative reputation for surliness; I found them to be acceptably focused on quick turnover, but the fellow who cleaned our tray was as polite and friendly as could be.

This is a million miles from haute cuisine, but it’s great trashy junk food for a long afternoon drinking beer on the deck with friends after class. The meat is seasoned just right, and the salsa is very good. The disappointment was with the bean taco. I’m still hoping that I’ll find somebody, somewhere, who might match the wonderful flavor of the much-missed Mean Bean of Athens. I’d love to see a hard shell taco completely packed with beans, special hot sauce and shredded white cheese. For $1.19. I shouldn’t have expected much, even with an extra quarter for tomatoes, but still, these really are a little underwhelming. Your best bet is a beef steak fajita taco, with lettuce and tomatoes. A couple of those and you’ll see why this deck’s been packing ’em in for almost thirty years.

Other blog posts about SATCO: