Nashville looks very much like a town in which a man can go a-drinkin’. The bars open early and don’t seem to close until late, and there appear to be more hospitals per resident than any other place this side of Miami to take care of what you do to your liver. But if you’re a family like ours, where three of us don’t drink alcohol and the one that does maybe has a single beer a month, it’s also a terrific place to drink all sorts of other wonderful things. When my daughter and I first got to the Music City on this trip, we skirted around the south side of the metro area via I-440 and started things off with a great milkshake at Bobbie’s Dairy Dip.

This popular old dairy bar opened in 1951 as Harper’s. It was renamed Bobbie’s in 1986 after it was bought by Bobbie and Lee McWright. They ran it for a dozen years and sold it to the third owner, who apparently ran into huge difficulties and closed it very soon after. It remained shuttered for some time until the fourth and current owner, Claire Mullally, reopened it in the spring of 2000.

I’m certain that I heard or read about Bobbie’s somewhere between then and now, but it crossed my mind again early last month. I was reading a recent issue of Southern Living that featured a short interview with Emmylou Harris. She mentioned that she loved coming out here for a milkshake after a Sounds game, and that sounded like a good idea to me, especially since we’d drive past it on our way to McKay. They do burgers, dogs, and chili cheese fries as you’d expect, but the shakes are what bring people by in droves. For $3.50, or $4.50 for a large, they’ll sell you a bizarre and loveable specialty shake named after some celebrity or other. The “Loretta Lynn” – butter pecan – is their most popular, and I was tempted by the “Memphis Mafia,” which is vanilla ice cream with banana, bacon, peanut butter and malt. I went with the “Donna Reed” in the end. It’s a spiced apple malt with cinnamon and I loved it. The girlchild was pleased with her “Cubby Checker” – twist ice cream, whipped cream, peanut butter and hot fudge, although it was so thick that she had to eat it with a spoon until it melted a little. 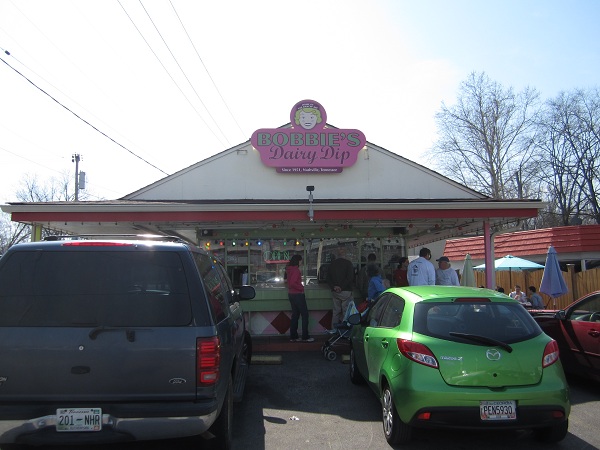 My daughter and I finished our milkshakes and continued west a few miles to McKay’s latest home. There, we spent a successful hour-plus shopping. I always have better luck finding things at the McKay in Nashville than in their stores in Chattanooga and Knoxville. They’re all very good, but I find more of the few things that I’m still looking for at this one. Finished my set of David Bowie on Ryko by finally getting Lodger here, for instance.

From there, we went back to the city center and had a snack at SATCO, as recounted in the previous chapter, but we got drinks a few miles further south down I-65. Last year, a Nashville blog that I follow, Lannae’s Food & Travel, stopped by Sunflower Cafe. This is in that former neighborhood near 100 Oaks Mall where all the old houses have become businesses. I believe that Grimey’s Record Store used to be out here. Anyway, Sunflower is a vegetarian lunch place – sort of a meat-n-three lunch line, without the meat – that has some people raving, but what brought us in was the soda fountain. 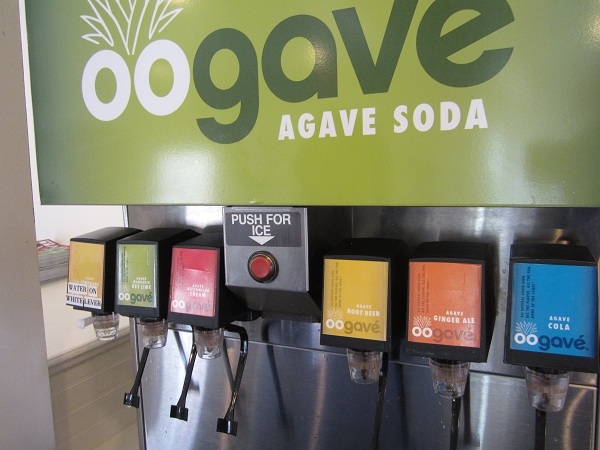 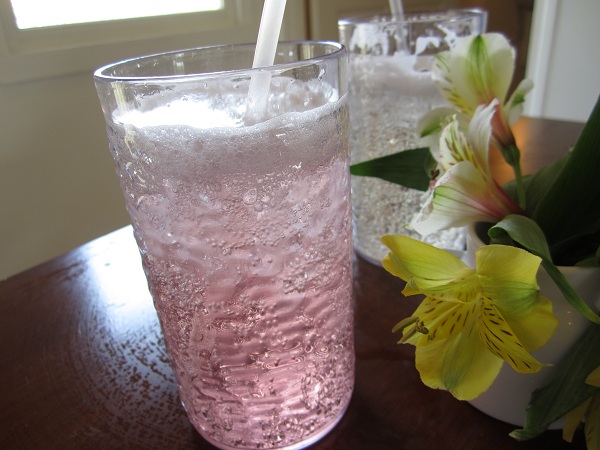 Oogavé is available in bottles in some stores in Georgia, principally health food grocers and chains like Fresh Market and Harry’s / Whole Foods, but this was the first time I’d ever heard of them offering their drinks in a fountain, and we had to try that. Wow. I learned that Oogavé got its start eight years ago in Denver, when a restaurant owner named Esteban Anson decided to make his own sodas with agave nectar instead of relying on national companies. That makes sense; his was a natural foods restaurant, so what on Earth was the point of selling sodas made with HFCS? His sodas took on a following, and in 2009, he began bottling and selling syrup for fountain outlets.

Anson has suggested that people were coming to his restaurant just for the drinks, and that’s what the girlchild and I did at Sunflower. The good people let us sample a couple of other flavors as refills, and I’m happy to report that Oogavé’s cola, ginger ale, and root beer are every bit as good as any in the business, and that root beer is one of the best ones I’ve ever had from a fountain. They’re kind of difficult to mix correctly, I think.

Best of all, however, are the more unusual specialty flavors. The Watermelon Cream is completely amazing, and we also enjoyed the Mandarin Key Lime. These are both terrific, and my only pouting complaint is that this six-head fountain didn’t have Oogavé’s most unusual sounding beverage, Strawberry Rhubarb. I’d love to try that sometime. If any restaurant in Georgia is thinking about getting an Oogavé fountain, please get that one and drop us a line. We’ll probably come and see you for the Watermelon Cream, which I love and which Marie needs to try, but we’ll make even faster to try that Strawberry Rhubarb. (I see that there’s a vegetarian restaurant in Asheville that has a fountain as well. That’s on the agenda for a future visit.)

But we weren’t done with soda pop in Tennessee, even if we were going to bring the rest of these calories home with us. Nashville is the only place in the southeast with a Rocket Fizz store. This is a bright and silly candy and soda shop that boasts of having 400 flavors available to purchase, including around fifty from their house bottling operation, some of which are from a deeply weird sub-line called Lester’s Fixins. You know how every year, or at least they used to, Jones Soda releases some really silly novelty beverages? Lester’s Fixins has that sort of craziness all the time. Sweet corn soda? Bacon soda? Darn right I’m bringing a bottle of that home. 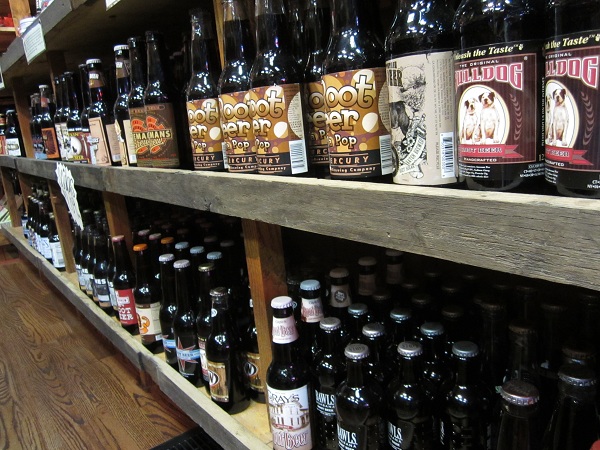 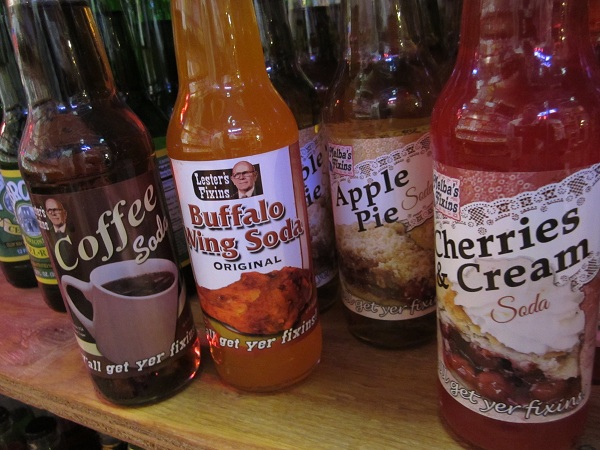 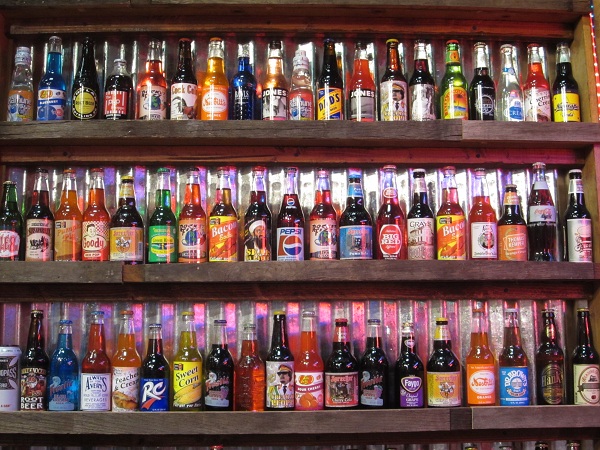 The first Rocket Fizz opened in Camarillo, California in 2008, and its owners, Robert Powells and Ryan Morgan, have been busy both in opening franchise stores – something like thirty-five of ’em – and in getting their own bottling operation going, using cane sugar and not HFCS. Their main Rocket Fizz line has twenty fruit flavors. My daughter brought home their Blue Cream and we all agreed that it was pretty good. Lester’s Fixins is the novelty line with six flavors: bacon, buffalo wing, coffee, peanut butter & jelly, pumpkin pie and sweet corn. Melba’s Fixins is the slightly less strange novelty line, including cherries & cream and key lime. Then they have some celebrity labels – they recently launched a cherry cola with TV’s “Snooki” on the package – and some unique fruit sodas (Plum? Kumquat?) packaged as Martian Sodas.

But that still leaves lots and lots of room for all sorts of bottles of other things from other companies. I had my fingers crossed that I’d find Jackson Hole Sarsaparilla, which we had picked up at Cincinnati’s Jungle Jim’s in December and completely loved, and was pleased to get a couple of bottles of that. Other recognizable labels include The Pop Shoppe, Boylan’s, Thomas Kemper, Jelly Belly, Faygo, Frosty, Nehi, Nesbitt, Howdy!, and Tommyknocker. They also sell such regional treasures as Ale-8-One and NuGrape, and while I didn’t see any Buffalo Rock, I wouldn’t leave Nashville without some. More on that in a few chapters.

Anyway, I brought home a pair of four-packs of various things, favorites and new, for Marie and me to enjoy. The Jackson Hole Sarsaparilla remains a real find, and I definitely recommend that you good readers track this down. And as for the Bacon soda? Oh, it’s just godawful. The girlchild and I managed about two sips each and poured it out. It’s one of the most unbearably and unspeakably nasty things I’ve ever tried. I’m tempted to buy more for the next time we have company over. You simply must try some.

Other blog posts about Bobbie’s:

5 thoughts on “Drinking in Nashville”