As we continued our little tour, the road took us south for the final stop of the afternoon before we needed to take I-65 north again and drop the girlchild for her appointment. I’d never visited Brentwood before; it appears to be the upscale community where all the local pro athletes and celebrity musicians have bought homes. It’s also where the owners of Judge Bean’s Bar-B-Que has, after several years of hiccups, have chosen to locate.

This restaurant has been on my to-do list for so long that not only did I forget where I first read about it, I’ve learned that there’s since been an ownership change and the man who opened the business in 2002 is no longer involved with it! Aubrey Bean opened the first incarnation of Judge Bean’s Bar-B-Que closer in to the city and slowly made his way further out into the suburbs with each of three moves. The most unusual of these came toward the end of the decade, when, for about twenty months, the restaurant was in the stands of the Nashville Sounds’ ball park, even when the stadium was otherwise closed for business. In 2010, he moved it to its present location, in the southern suburb of Brentwood, and, the following summer, sold off his interests to his partners and soon afterward opened a new barbecue place, The Judge’s Vinegarroon, back in closer to Vanderbilt.

Meanwhile, the business that he started is doing all right. I’ve yet to have a plate of barbecue in middle Tennessee that really knocked my socks off, but Judge Bean’s has come fairly close. This is very good pulled pork, and I had mine served up with some seasoned steak fries and a bowl of mac-n-cheese that I passed to the girlchild. 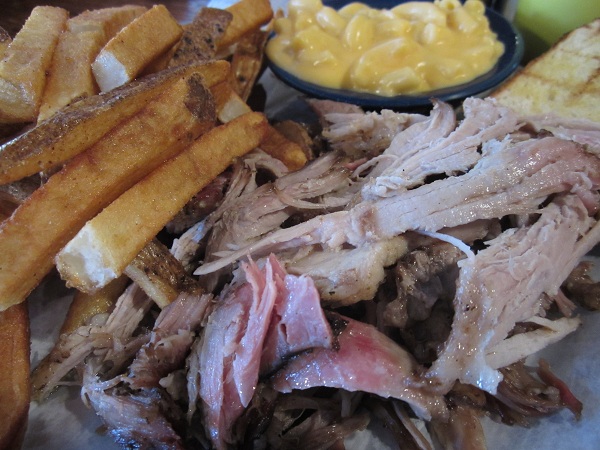 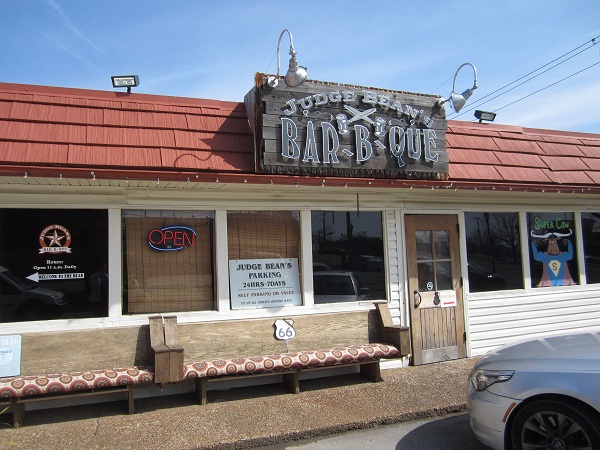 Perhaps we might make the argument that it’s better to consider the quality of Texas-themed barbecue by trying their brisket, but I’m a Georgia boy, and barbecue means pork to me. Oh, I enjoy chicken and brisket and beef ribs just fine as occasional changes from the routine, but I think that a place stands or falls on the quality of its pork. This is smoked overnight over hickory and is very tender and just a little dry.

Prices are in line with what you see for barbecue in most metro areas, and this regular six-ounce plate with two sides cost $9.50. On an afternoon where we were going to visit just a single restaurant for a lunch like most people, and not the five that we did, I’d consider the $12.50 Smokehouse Combo and add some ribs to that, and also consider an appetizer of their “Texas Sushi.” This is a jalapeno stuffed with sausage and cheese and wrapped in brisket. Alternately, I see now from other hobbyists’ reports that their smoked salsa is quite intriguing. That honestly never occurred to me to try; I think that I’d like to sample that some day.

Other blog posts about Judge Bean’s: