When we were last in Nashville, on our way downtown to a place called Tazza, we drove past a place that I’d seen a dozen times, easily, without it ever registering. Our friend Tory pointed out a German-themed restaurant called Gerst Haus that has been packing in vistors since the original owner, William J. Gerst, opened it in 1955. The restaurant started after the closing of the Gerst-Moelin Brewery (later William Gerst Brewing Company) the year before (1890-1954). Over the decades, it has transitioned from a dark and uninviting pub into a big palace for families. There are still dozens of beers for guests to sample, but I’d had calories aplenty on this trip already and stuck with water.

Fifteen years later, ownership had passed down to Gerst’s daughter Gene and her husband, who, confusingly, was also named Gene, and they moved it from its original home on 3rd Street to Woodland. Gene and Gene Ritter ran the place there for eighteen years, until 1988, when they sold it to brothers Jim and Jerry Chandler, who also own a small group of restaurants in Nashville and in Evansville, Indiana, the best known of which is probably the Sportsman’s Grille, with three locations.

Gerst Haus was closed for two years at the end of the 1990s. That whole chunk of Woodland was flattened to make room for the Tennessee Titans’ stadium. It reopened at its present location down the street in 2000, across the road from a Shoney’s. On game day, both restaurants are completely packed.

So as we drove past four months ago, I added Gerst Haus to our to-do list. Back in Nashville for our two-day stop, we got back together with Tory, caught up, drove around, looked at old bowling alleys, shopped, let the girlchild visit her mother for a few hours, and the three of us ended up here for supper. 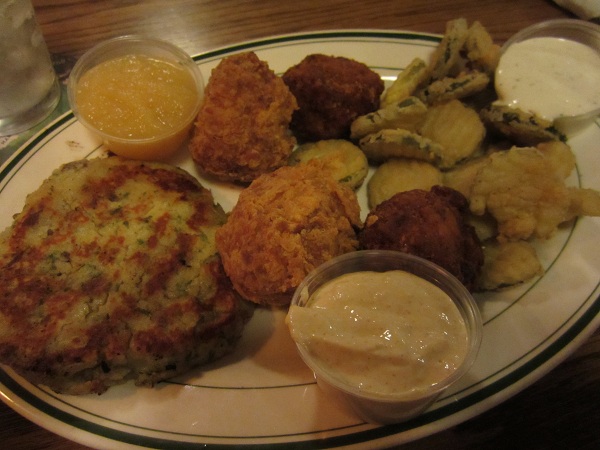 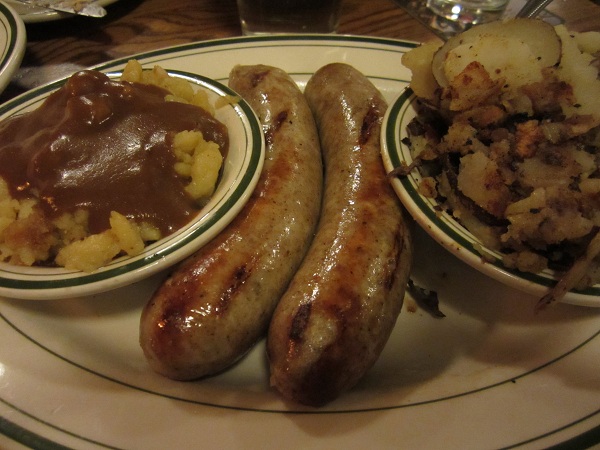 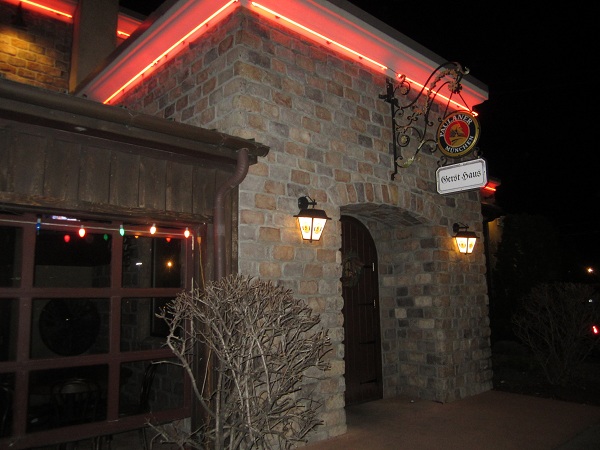 Regular readers might have noticed that we have not found many opportunities to feature a German-themed restaurant. I’m hard pressed to think of a single one, actually. A couple of years before we started the blog, Marie and I enjoyed a quite nice dinner at Erika’s in Louisville, Kentucky, a quiet, no-frills place with excellent food, but I guess that our food interests don’t really take us this way very often.

Some of the stories about the older incarnations of Gerst Haus, when it was a smoky joint full of crabby servers and barely any tables free for people who weren’t in with the court reporter in-crowd that filled it, make it sound like it was once a much more interesting place than it is today. It’s certainly much more child-friendly today, a Six Flags Over Bavaria version of German dining that has families dancing around the dining room on Friday nights to the sound of an oompah polka band.

Sanitized and scrubbed, the modern Gerst Haus stands or falls on the quality of its food, and it ranges from pretty good to excellent. The appetizer sampler comes with ham rolls in a bread crumb coating, balls of beef, pork and sauerkraut similarly fried, oyster rolls, and a really terrific, standout Kartoffelpfannkuchen (potato pancake). We substituted fried pickles for the oysters, since none of us either enjoys them or are allergic to them. I kind of regret not asking for pig knuckles instead, but the girlchild, who had milkshaked and eaten her way to unconsciousness earlier in the afternoon, was only planning to pick at the appetizers and I’m certain that knuckles would not have gone over well with her.

Tory had a gigantic plate of fish and chips and I had bratwurst, two huge sausages along with a bowl of fried potatoes and a bowl of Spätzle, which is sort of a dumpling-noodle with savory brown gravy. Of course I did not finish; there was far too much very heavy food here, especially after our busy afternoon, and a nice chunk of this went back to Tory’s fridge. What I sampled, though, I certainly enjoyed, and I didn’t leave any Spätzle for anybody else.

We returned to Tory’s house to kick back and listen to music and watch silly videos on YouTube. We stopped on the way back at Pied Piper for some ice cream to put in the freezer until we got peckish. That didn’t come for quite a while, but then again, we had lots of silly videos to keep us busy.

Other blog posts about Gerst Haus: