As the afternoon started turning into evening, we stopped by a pretty good comic and game shop in Henderson KY called Knight’s, and then made our way north to Evansville to check into our hotel and relax for a couple of hours. Our son had been really well-behaved on the trip, but the road can wear on a four year-old, and kids need a little something besides a restaurant to break the time in a car! So he ran around and bounced around, and, after the sun went down, we drove over to Franklin Street to rejoin our friend Louis for a meal at the city’s Gerst Haus.

One of the odd mysteries of our trip is this: Evansville has a quite large population of German-Americans, but the city does not appear to have any German restaurants other than Gerst Haus, which opened in 1999. It is the second of the two stores in this small chain. I visited the first, in Nashville, back in 2013. That Gerst Haus originally opened in 1955, and was bought by the Chandler family in 1988. They own several restaurants in the central time zone, and elected to open a second Gerst Haus in a beautiful old hardware store, Heldt & Voelker, that was sitting across the street from their popular Italian steakhouse, Smitty’s. The menu is slightly different from the Nashville location; I realized after we got home that I could have ordered a breaded pork tenderloin here, but I barely glanced at the menu and didn’t see it. Part of the reason we came to Indiana, and as we’ll see at the next two stops, was for me to have some breaded pork tenderloin sandwiches. I am willing to wager that the BPT here is a better sandwich than either of the two that I had. Grumble. 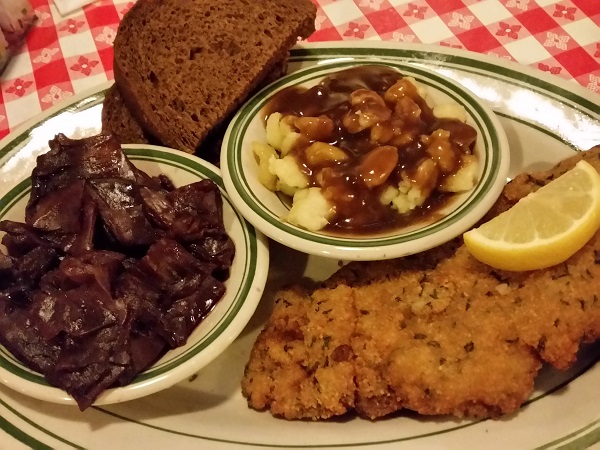 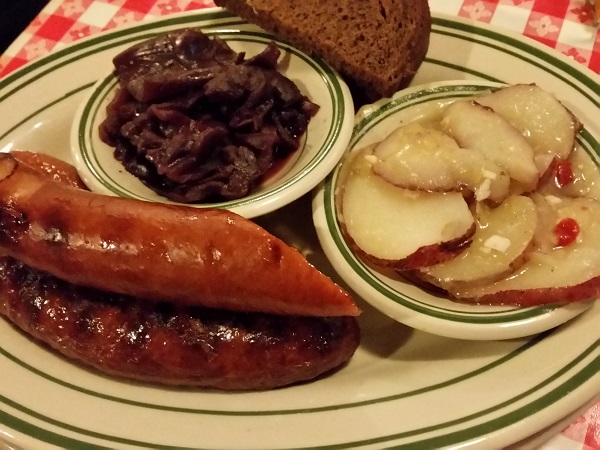 Louis suggested that we order the red cabbage with our meal, saying that it’s among the best that he’s ever had. Since I had a stop to make after this one, I just had half of one of the sausages from the platter that Marie ordered, a smoked mett, and a glass of Cafe Leche, a milk and coffee porter from the local Tin Man Brewing Company, which was excellent. Their beer list is quite impressive; Gerst Haus does a great job supporting local breweries with room in their taps, along with German, Belgian, and Czech beers. Marie really liked the knockwurst and kielbasa, but I thought that the sausage was especially good with a little of the excellent brown mustard. We also really liked the hot potato salad.

The Wiener schnitzel is their best selling dinner item, and Louis was very satisfied with his order. He had it with the red cabbage and the kugel. It was a very good meal and the service was excellent. This is a very popular restaurant with guests of all ages enjoying rousing conversations, good food, and beer in fishbowl glasses. It’s not a place for a quiet getaway, but nor does it have that family-overfriendly feel of the Nashville Gerst Haus and its weekend polka band and chicken dances, either. 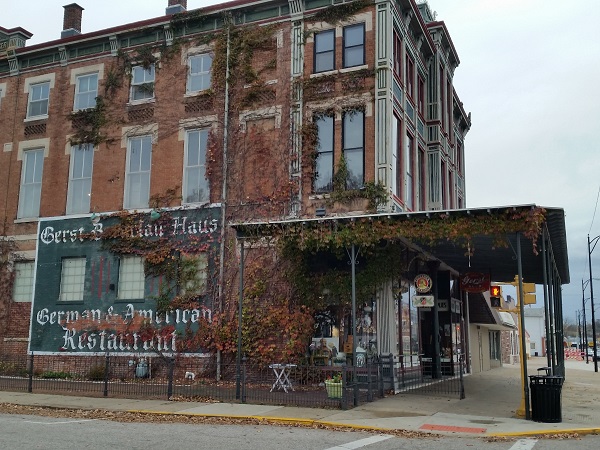 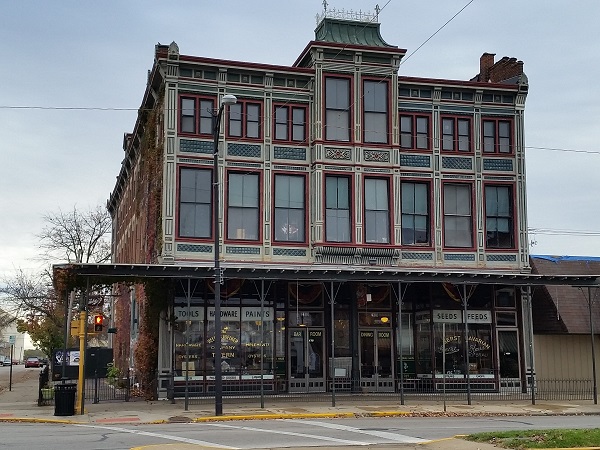 We said good night to Louis and made our way to the next restaurant on our to-do list, but we came back by in the morning to get some photos in the daylight. But our first stop on Saturday morning was at a local grocery store, Royal, which is part of the Kroger grocery empire. I had read that Double Cola and Ski, while based in Chattanooga, were more popular in Evansville than at home. At the grocery store, I found stacks and stacks of Ski twelve-packs, but no Double Cola, and neither Coke nor Pepsi, either, only RC along with the chain’s “Big K” label. RC is much more common in these parts than in Georgia.

So I didn’t see any Double Cola anywhere that we stopped, but when we came back to Gerst Haus about 8:15 in the morning, I noticed that Hagedorn’s Grill and Bar, which is catty-cornered from the restaurant, has an old Double Cola sign out front above its door. And on the tavern’s enclosed patio on 10th Street, there’s something I’d never seen before: a Ski vending machine. 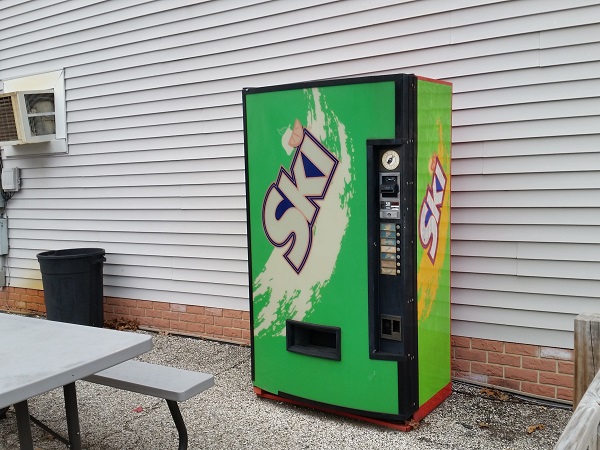 You know what cola’s in that machine? Not Double, but RC. How very peculiar!

3 thoughts on “Gerst Haus, Evansville IN”