(I didn’t eat anything at the fifth restaurant on our day trip, thinking, correctly, that Marie would really enjoy this one. It’s one of at least four German restaurants in the Rocket City, and the one that our friend Helen recommends as the best in town.)

Every so often you chance on something that reminds you just perfectly of something in your childhood. If you’re lucky, it’s a good thing, and the genuine pleasure of enjoying it along with the memories of past encounters layer on each other for a really wonderful experience. In this case, it was the red cabbage at Hildegard’s German Cuisine.

Grant and I had gone on a little road trip to see our friend Helen, and we met at a restaurant she felt was pretty good: a German place that she’d gone to often. We talked for a while about the last German restaurant that we visited, and how sparse this type of restaurant happens to be, even in cities with a larger German-American population; Grant suggested that perhaps people of German descent simply don’t want to go to a restaurant to eat their native cuisine, as they can do it themselves much better at home. Now, I’m of Dutch descent, and spent just enough time in the Netherlands in my childhood to pick up a fondness for their version of the recipes. Hildegard’s does the red cabbage exactly the way I like it, and although I’ve tried, mine just doesn’t quite come out right. Pity it’s such a long way away! 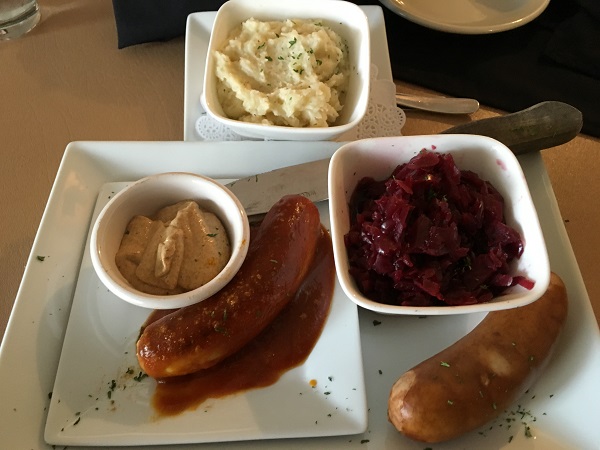 I tried the knackwurst and the curry wurst and they were both tasty and familiar. A certain small person swiped my side of mashed potatoes, but we got a few tastes of that anyway and it was excellent as well. But man, I could have polished off two of those sides of the cabbage.

We’d been informed the apple strudel was special (and the piece in the display case looks it!), but I was in a more chocolate sort of mood. They had dark chocolate layer cake with ganache frosting and apricot jam between the layers. It was lovely, but it took all of us to eat it because it’s a big piece and very rich. For maximum enjoyment, I’d recommend coming to eat it for an afternoon snack (so you can get in after the crowds die down,as we did) on a day when you don’t plan to have much dinner.

This particular location had been recently expanded and they appeared to be considering adding still more; it has a small patio as well which wasn’t available since the weather wasn’t ready yet. It is one of two locations in Huntsville (the other is Hildegard’s Biergarten and designed for larger parties), and deserves to continue doing well. If you are ever in the area and have a fairly big appetite (or at least a big sweet tooth), stop by!