In the previous chapter, I mentioned that some amazingly good fried chicken originally brought me to the Henderson area. That’s no longer available, although the rights to the old Bon Ton recipe can be purchased or leased for a price. Our friend Louis Hatchett was very clear that while nobody’s fried chicken was quite like the Bon Ton’s, there was some pretty good stuff available at a drive-in called Mr. D’s.

In the early 1970s, there were two quietly competing fried chicken joints in town: the Colonel’s Lair and Colonel Jim’s. After the Colonel’s Lair failed, one of its employees, Sherry Koch, licensed the recipe to an employee at the Bon Ton. Colonel Jim’s also went to that great fry cooker in the sky in time, and its recipes came to Mr. D’s, which opened up in the home of a former Sonic Drive-In. All of the signage notes that they serve Colonel Jim’s Spicy Chicken, which has its own separately-typed menu posted beneath the restaurant’s standard menu of hamburgers and hot dogs.

Using these old chicken recipes, what both the Bon Ton and Mr. D’s had in common is a mild, tingling spiciness, crisp, salty crust, and incredibly juicy meat. But Louis was correct in noting that this is a distant relation to what had been available. He ordered a two-piece snack and Marie and I shared a three-piece snack, and the results were pretty good, I thought. He promised pretty good, and the restaurant delivered, yet Louis grumbled that Mr. D’s was usually better than this. 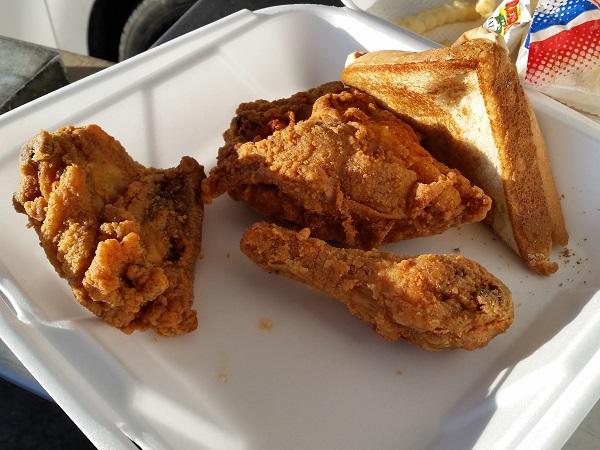 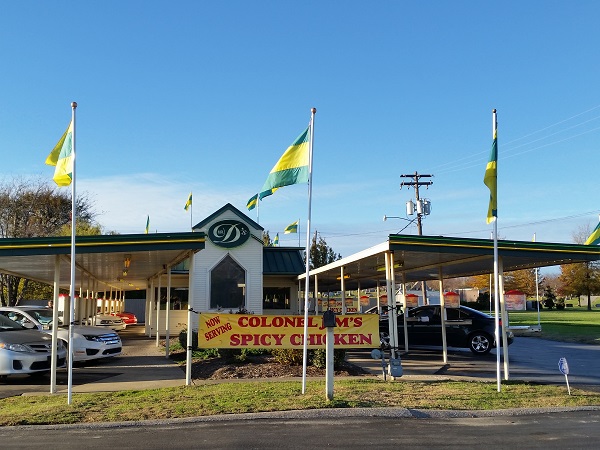 Louis was very disappointed, and while I insisted that this was a whole lot better than a lot of chicken we’ve had, and we were satisfied by it, I certainly recognized the feeling he was expressing. We’ve been in that mental place before, when we sell a friend on a restaurant and they don’t quite deliver the goods and we’re left with a sheepish look and must assure our compadres that the restaurant is honestly capable of much better. So we came on an off day, and Mr. D’s usually has better, juicier, spicier chicken. That’s cool; it happens.

The following day, Louis was still aggravated about Mr. D’s letting him down, and he explained that when he hosted Jane and Michael Stern some years ago and took them around to a few restaurants that they wrote about for Gourmet and for their roadfood books and web site, they were accompanied by a writer from The New York Times. Louis, himself a writer, was concerned about objectivity and impartiality and so did not divulge that his family owns, among other properties and businesses, a gas station on the east side of Henderson. That gas station has a small kitchen, and the fried chicken that they make, he said quite modestly, is pretty good, too.

He mentioned this because I had said that we were going to gas up after leaving Evansville before heading west to Waverly. Gas throughout Kentucky and Indiana was a pleasing $1.89 or so compared to $2.10 at home, but all around Henderson, it was available for an amazing $1.47. There was one place we saw later that had it for $1.41. Wow. Anyway, I had said that our plans were to swing by a restaurant on Riverside to get some photos in the daylight, gas up, and go, and he sold us on making the slight detour. 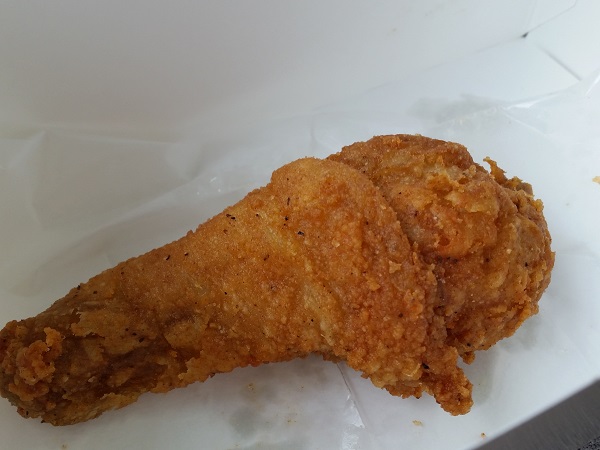 Good gravy. Louis’s modesty has been hiding some astonishingly good chicken. You know, in this hobby of ours, you often read about some gas station in Mississippi having amazing tamales, and some gas station in Louisiana having the best boudin for two hundred miles, but without an actual guide, we are not all that keen to take the risk. From time to time over the decades, we’ve ordered some barbecue or pie at a gas station or a truck stop in Georgia or Alabama and invariably dropped most of it in the trash on the way out the door, so every time I’ve read about some incredible find on a badly-paved road in Podunk Parish, I’ve shrugged with a jealous burn and grumbled “Nice for some, I reckon.”

So here you go: this gas station is called Greenleaf Market, and it’s on US-60 about a mile east of US-41, and the fried chicken that they serve is knockout good. Stupid good. Hundred mile good.

Louis confirmed with the girl working that the chicken was fresh, and I ordered a drumstick and a bag of Grippo’s barbecue chips. We found Grippo’s three years ago in Ohio, and I think those are the best chips that money can buy. I did not order more than that because we were already almost an hour behind schedule and had three more restaurants on the agenda, and a very, very tight budget. We’d dipped into the overage pocket a couple of times already for some incidentals on this trip. Had I known that we would be two full hours behind schedule before we left Waverly, and would be dropping the last two restaurants from the plan because we were so late, we would have settled in and eaten a whole lot more than one drumstick.

In fact, the next thing that delayed us was a funeral procession that drove for fifteen miles, from the outskirts of Henderson to a cemetery somewhere around Corydon. Had we stuck around and ate more chicken, we’d not have been a minute later than we were.

The chicken has a pleasant, sharp bite of cayenne and just a little bit of salt, crumbling with perfect little crispy crumbs as you dig into that perfect, incredibly juicy meat. Louis explained that they get the spice mix, a proprietary blend, from some place about two hours east, and that while the quality can ebb a little if it sits too long, if you get the chicken in the morning, it’s usually pretty good.