The small city of Henderson, which is kind of a “bedroom community” of Evansville, Indiana, is a very, very under-explored region for food lovers. Back in the spring, I asked the well-informed regulars at Roadfood.com for some recommendations, and writer Louis Hatchett strongly recommended that I come his way and sample the astonishing fried chicken at the Colonel’s Mini-Mart with him. Sadly, this once-booming little place, while still serving up the most amazing fried chicken I’ve ever had, was stumbling through bad decisions and mismanagement, and shut its doors for good a week or so after my stop. (Here’s the story.)

I was really taken with the countryside and intrigued by what else we might find up this way. Since it turned out that the area has a couple more places with very good fried chicken, more barbecued mutton, some amazing bridges, and a couple of other treats, I dropped Louis a line to confirm our schedule, and we met him in the mid-afternoon at Henderson’s most popular barbecue restaurant.

Thomason’s is the third name for this tiny brick place on Atkinson Street. Various owners have been smoking barbecue here since 1959, but when David Gibson bought the restaurant in 1994, he decided to keep the name it had used for the previous twenty-some years. It is mainly a take-out place. In stark contrast to the big dining rooms and parking lots of Owensboro’s three largest barbecue restaurants, this tiny restaurant has only five tables. There is a decently-sized parking lot across the street. Thomason’s does a roaring business in catering and large orders; they have a banquet hall across the street, and travelers should park there.

Here, as in Owensboro, chipped mutton is served in the sauce. But while the Owensboro places prepare their meals in advance to feed their mammoth crowds, Thomason’s pulls the meat to order. Now, I liked the mutton at two of Owensboro’s restaurants just fine, but here in Henderson, the quality is exponentially better. The meat is smoked over hickory in a masonry pit in the center of the building, with a tiny prep station right next to it to get each customer’s order just right. The meat is pulled when ordered, finely chopped, and then drowned in the local Worcestershire-vinegar dip before serving. 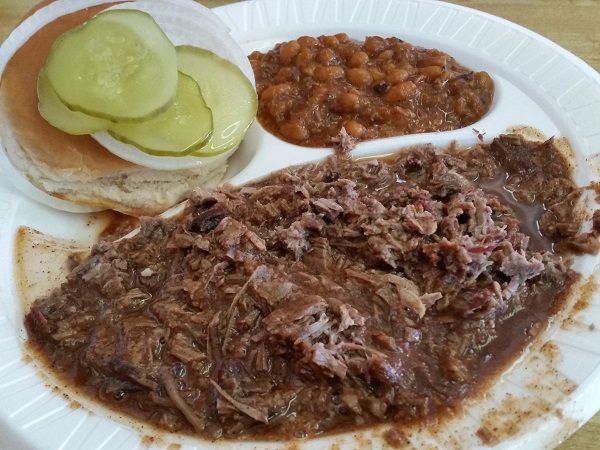 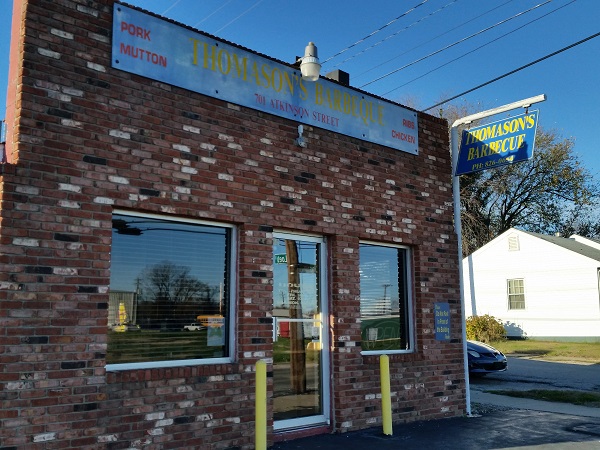 And yes, that is a huge, huge plate of barbecue. It’s completely delicious. “Trays,” as they are called here, are not like “trays” in the North Carolina piedmont area, where meat and slaw are served together in the same cardboard boat. A tray in this region is an order of meat about twice what they give you on a sandwich, served with bread, pickles, and onions on the side. At Thomason’s, a mutton tray is $6.60, and pork is just $5. I was interested to see that they offered rye bread, which is rarely served around Georgia (you do see it at Old Clinton), but since I don’t much care for rye, I didn’t think to order it. Rye is much, much more popular in these parts, though, and offered at many restaurants.

Overall, the mutton is completely delicious, although not even the best thing about the meal. Louis strongly recommended that we try the beans as well, and these are heavenly. They’re quite sweet with a strong taste of brown sugar, and smoky with pulled pork. You’ve never had beans this good.

This stop at Thomason’s was my favorite meal of this day of the trip, though we still had some other good ones to come. Just thinking about it has me considering another trip this direction, which probably is not going to happen for quite a long time yet. When it does, I’ll definitely want another order of these amazing beans.