At the beginning of June, I had the tremendous pleasure and very good fortune to enjoy the breathtakingly good fried chicken at The Colonel’s Mini-Mart, just outside of Henderson KY. The good fortune came in arranging the opportunity to eat here before the storied restaurant shut down for good just eight days later.

Previously known as Bon Ton Mini-Mart, the restaurant was championed by Jane and Michael Stern of Roadfood in the early 2000s, and was featured in their column in Gourmet. A local writer, Louis Hatchett, brought Bon Ton to the Sterns’ attention, and he was good enough to meet me for a midday snack and tell me the history of the restaurant, including how full and popular it was back in its glory days.

I raced out of Owensboro at a good speed down KY-9005 and got to the Mini-Mart after about half an hour. Louis and I had the place to ourselves. This was a far, far cry from the days when every table at the Bon Ton was taken by somebody from out of town, making their way to western Kentucky to sample this chicken that the Sterns had raved about. One incredibly wealthy fellow in Texas – rich on oil but poor on smarts – used to pester the staff to prep a giant carry-out order for his pilot to fly home, apparently not understanding that fried chicken doesn’t travel well.

And what chicken this was. There are as many recipes for chicken as there are stars in the sky, but darned if this stuff didn’t live up to its storied reputation. It was the juiciest chicken that I’ve ever had, hiding under an incredibly crispy and mildly-spiced skin with just a trace of salt. Nowhere near as hot as Nashville fried chicken can be, this had just enough of a kiss of cayenne to get your lips tingling, and just enough salt to make you reach for a drink, and just enough flavor to make you pause because you wouldn’t want to wash the taste away. I told Louis that I’d had some amazing fried chicken and that up until June 5th, my top three were Gus’s, Bell’s, and Shrimp Boat, but that got changed in a hurry. 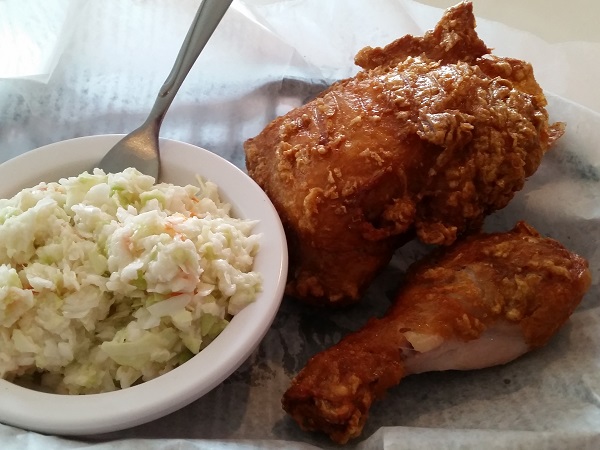 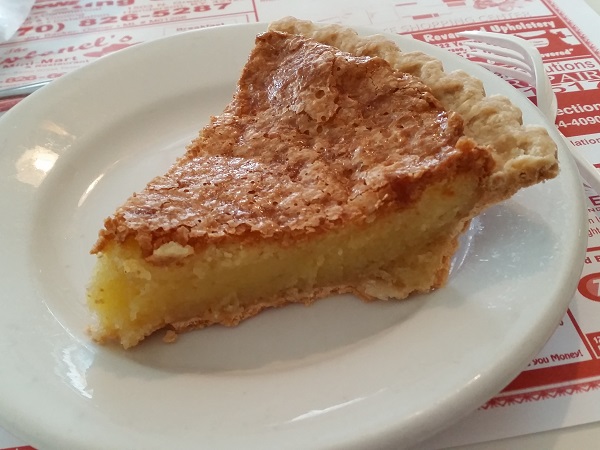 At various locations, fried chicken with this particular mix of juice, spice, and crispy skin, has quietly been bringing curious eaters to western Kentucky since the 1960s. The specific recipe used at the Mini-Mart is owned by Sherry Koch, who picked it up at her family’s restaurant, The Colonel’s Lair, where she worked almost fifty years ago. She licensed the recipe to Donna King, a former Lair employee who started cooking at the Mini-Mart many years later.

For quite some time, the Mini-Mart was indeed a convenience store – hence the name – that started offering some hot meals. The store was owned by George Markham, who retired in 2008 after transitioning it into more of a restaurant than a shop, and sold the business to Mrs. King.

In late 2013, Mrs. King also retired, and passed the business – with a license to use the name “Bon Ton” – to the Dundee family. Some of what Louis shared with me, and what I observed, need not go into print, but it appeared evident that the business was coasting downhill. A disagreement about paying the “Bon Ton” license meant that the name had to be changed, among other issues. Trading as “The Colonel’s Mini-Mart,” they adopted the local high school’s mascot as their own. The high school has used the same drawing that Ole Miss had once employed as “Colonel Reb” for ages, but for out-of-towners like me, who think “Sanders” when we hear “Kentucky colonel,” it was a bit surprising to see this character so far from Oxford!

With funds and credit low, the decline and failure of the Mini-Mart was no great surprise, but it is an awful shame, and not just because the chicken was life-changing. They also had RC Cola in the fountain and made a simply amazing chess pie. Since this was going to be my last meal for several hours, I went ahead and indulged in that and loved it. But if I’d known they were going to shut the doors for good eight days later, I’d have had some more chicken for dessert.

There are other places in the area to sample fried chicken made from similar recipes. Mr. D’s Drive-In is just three miles away, in Henderson itself and just a stone’s throw from the Ohio River. The city’s also home to Thomason’s Barbecue, which caught the Southern Foodways Alliance’s eye in 2009. (Check out the interview!) So yes, western Kentucky is definitely on the to-do list, even if the Mini-Mart’s particular chicken is no longer available. Louis says that Mr. D’s chicken is worth a taste, and I’d like to try more mutton, and Evansville’s just across the river and I’m optimistic that I’ll find a really good pork tenderloin sandwich there.

(Get this, Atlantans and Columbians: Evansville also has its own once-a-chain-and-now-independent Zesto Drive-In. That just means that we’ll have to go, doesn’t it?)

I’m glad that I had the opportunity to try this chicken before the doors closed. I’m tasting it again as I’m writing this up, and I’m very much afraid that it is going to haunt my dreams for the rest of my life.

Many thanks to Louis Hatchett for buying my meal and telling me so much of the Mini-Mart story. You can order Louis’s biography of Duncan Hines, How a Traveling Salesman Became the Most Trusted Name in Food, from Amazon.