The drive back from Henderson KY to home was a very long one, and there was a lengthy detour in Manchester TN that messed up my late dinner plans. I stopped at the Russell Stover outlet just off I-24, looking for a certain package of caramel seconds that Marie loves. The two employees working the evening shift tried their best to help me, and looked everywhere for them, but it took a long time and we didn’t find any. I got a reasonable alternative, filled the gas tank, checked Waze, and realized that I was not going to make it to Ankar’s Hoagies in Chattanooga before they closed. Darn the central / eastern time split. It’s messed me up in the past, too.

So I got moving anyway, and remembered such an odd little coincidence. Last year, I read a fun “clickbait” article at Thrillist called The 33 Best College Sandwich Shops in America, noted a listing for Shenanigans, near the campus of Sewanee: The University of the South, and thought it would be worth a stop one of these days. In fact, the day before, as my daughter and I drove through Monteagle, I pointed vaguely left in the direction of Sewanee and said that there’s supposed to be a really good sandwich shop that way somewhere which I intended to visit. I had no idea that I’d be doing that just 36 hours later! 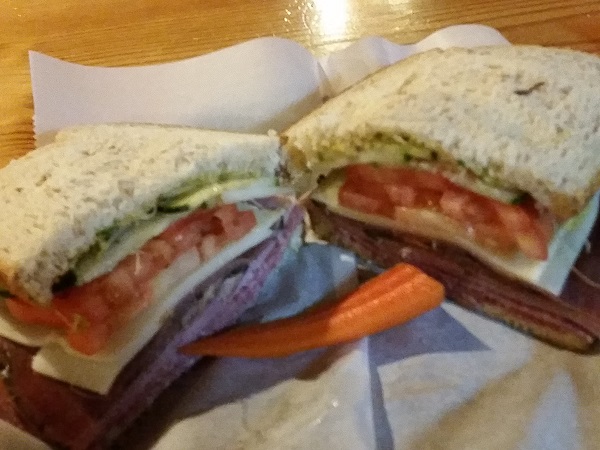 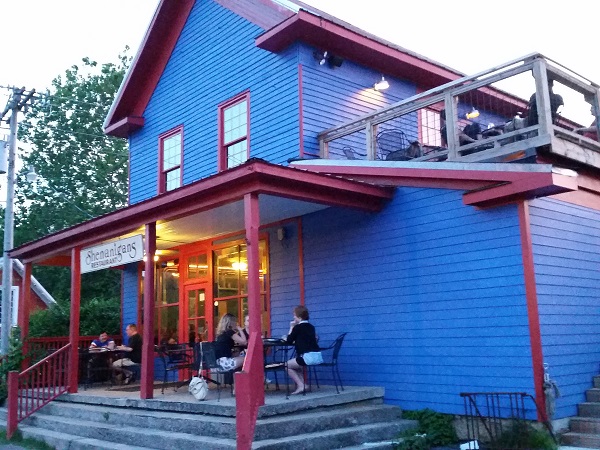 So my camera just cannot stand low light and doesn’t understand how to focus. I’m coming to terms with it. Slowly.

I wish that I had gone to Shenanigans years ago. Don’t get me wrong, I’m glad that I came and enjoyed my sandwich, but the building was a complete wreck for thirty-plus years before it was renovated in 2010. Toward the end of that “classic” period, it was actually leaning over so far that you had to kick the front door open! Sadly, after the considerable expense of rebuilding the structure, Shenanigans closed in 2012. It was reopened under new ownership in February of last year. Old friends Nelson Byrd and Bill Elder, who have lived in the area for years. Elder’s wife is a Sewanee grad, and so is Byrd.

Also, I wish that I had stopped by when classes were in session and there were more students about. For a Friday evening, this place was really relaxed. There were just a few other late-night groups, and a couple of families, but this joint was hardly hopping. The sun went down while I was waiting for my sandwich, so I ate indoors so I could have enough light to read by. If I had come with friends, then I definitely would have preferred to eat outside, because it was a gorgeous, cool evening on the mountain, and this is a splendid place to spend a few hours sipping pints with friends. I ordered a Shenaniwich, which is roast beef, ham, salami, swiss cheese, tomato, cucumber, sprouts, mayo, and mustard, and it was very good. Sandwiches here are served with a carrot, instead of a pickle or anything that ordinary.

I thought about an old pal and former co-worker, Margaret Anne, while munching, because she went to school here and I figured this must have been one of her usual haunts. I dropped her a line after I got home and she said that she loved to get the turkey melt and fried zucchini when she ate here. Maybe if I’d planned ahead of time to come to Shenanigans, I would have written her for a recommendation first, but I’m very glad that at least I remembered this detour was available and didn’t end up getting a late dinner at a drive-through someplace instead.

So that wrapped up my sixth “circumnavigation,” and it was quite a bit different from the usual battle plan of barbecue by myself. It’s possible that I might do another one in early 2016, or we might divert some resources to something a little different around that time. But keep those recommendations and ideas coming; we love to hear ideas about where we should eat.

In February 2020, I stopped by again with Marie and our son and had a terrific time. I had another Shenaniwich, this time as a sub, Marie had a patty melt, and our kid had a simple burger.

It was an absolutely lovely visit. We got there a little before six and the place was packed and the vibe was so relaxed and friendly. We sat next to a table of profs from the English department talking about poetry and just soaked up the happy, laid-back, smiling vibes. Since our previous visit, I briefly worked with a fellow who did time in Shenanigans’ kitchen while studying Russian at the university, and when I told him I was going to stop by and raise a glass to him while I was here, he got the biggest smile you’ve ever seen. It’s a great little restaurant and a key element of a splendid day trip.