In his book Southern Belly, John T. Edge wrote about the Jacksonville-area “camel rider” pita sandwiches. This served as background for a longer 2012 story in The New York Times, in which he mentioned that the riders have been spotted in a few other cities around the southeast. Edge mentioned Birmingham and Columbus (where, our friend Matt pointed out, camel riders have been a staple at a restaurant called Speakeasy for decades), but it turns out that camel riders have also made it as far as Chattanooga.

There are three different Ankar’s Hoagies locations around Chattanooga. I believe that two are owned by Sam Ankar, and we stopped by the location on Brainerd, across the parking lot from Rib & Loin and that awesome Sir Goony’s golf course. There’s another with that logo near Northgate Mall in Hixson. A third, with a different logo, is downtown and I believe that this one was owned by George Ankar, who passed away in April. The Ankar family is originally from Ramallah, in the West Bank. I asked the counter staff whether the family had ever lived in Jacksonville, but nobody was sure.

There’s a source for Jacksonville’s delis that’s even better than Edge’s overview, and that’s a 2010 story by viCARIous about riders, cherry limeade, and steaks-in-a-sack. Or steak-in-a-sacks. Or sac, however its spelled at the restaurant in question. Anyway, if you read her awesome story, you’ll get a good sense of what the delis there offer, and Ankar’s, despite looking more like a 1970s fast food place with some American beers on draft, has a menu absolutely like a deli from northeastern Florida. 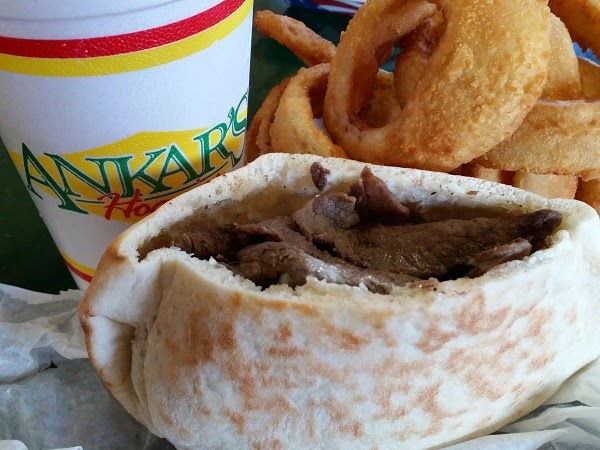 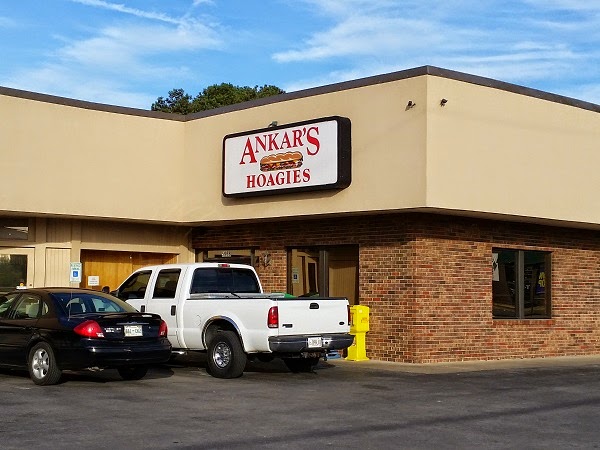 I ordered the steak-in-a-sack, because I’d never had one of those, and made the mistake of declining the offer of cheese. It wasn’t bad, but I’m sure it’s a much better little sandwich with cheese; as it was, it was kind of dry. I’d like to come back another day and try either a club or a camel rider. I’ll definitely order the onion rings again. They give you a heaping pile, and they are excellent, with very similar breading to the very good ones at South 21 in Charlotte NC.

The cherry limeade here is called a Lime Supreme, and it’s a little more cherry than it is lime; very sweet and not tart. Our son, who was enjoying some fries, gave me an evil eye about the cup of water in front of him – he had a big cup of orange soda earlier in the day – grumbling “I’m allergic to water.” I’m not sure where he picked that up, but we’ve taken to replying, “You and the Wicked Witch of the West, yes.” Eventually, I relented a little bit. Of course he could have a sip.

This was the final stop on our Chattanooga tour; we were here to pick up the girlchild after a week away. She’d been delayed, and asking our son to wait patiently in a restaurant for what turned out to be a long time was a bit much. Marie took him across the parking lot to Sir Goony’s while I waited a lot longer. As I watched the news, I noticed that the table turnover is very slow here on Saturday evenings. Lots of people stay here for a good while over a pitcher of beer and a basket of onion rings. The lunch rush is apparently pretty frantic and fast, but rather than dying off in the evenings, it becomes a good neighborhood stop with a decent crowd, taking their time and enjoying the good food.