Is it possible that Atlanta’s actually transitioning from a pork town to a brisket town?

Yeah, I know, and the next barbecue joint to open will be serving unicorn meat on solid gold plates. But we are certainly seeing at least a little evidence of this. Honestly, and I say this as somebody who’s been championing the quality of Georgia barbecue as loudly as I can for years, I’ve had a surprising amount of downright average pulled pork in the Atlanta area in the last twelve months. Some of these meals were at newer restaurants which got a little bit of a grade on a curve for being new. Blue Sky in Woodstock and Anna’s in Kirkwood come to mind. I’ve also stopped by old standards like Pappy Red’s and Bub-Ba-Q to see that the quality had dipped a lot, and some joints, like Pigs-N-Heat in Kennesaw, were so disappointing that they weren’t worth the time to write about them.

At the same time, I’ve been finding much, much better brisket around town than the Atlanta area is used to. It’s not universal, certainly, but good brisket in this city was once simply impossible to find. Things started improving ten or so years back, in the wake of Fox Brothers, but in the last twelve months I’ve found brisket that’s a whole lot better than the old average at lots of places, like The Greater Good and The Pig and the Pearl. This disparity is most evident at Twin Smokers on Marietta Street, where the pulled pork is average, certainly edible but not inspiring, but the brisket and the sausage have been good enough for repeat visits. In fairness, it was a little underwhelming on one occasion, but I still think it’s a toss-up between Fox Brothers and Twin Smokers as to who makes the best in the city.

Last month, Andy at Burgers, Barbecue and Everything Else made a new discovery: Bludso’s, an outfit that opened its first store five years ago in Compton, California. This is the third location, and it’s run by the co-owner of the Compton store, Damien Scroggins. It’s named for Kevin Bludso, whose family is from Texas, lending a bit of authenticity to the claim of genuine Texas barbecue, by way of California, to Atlanta. 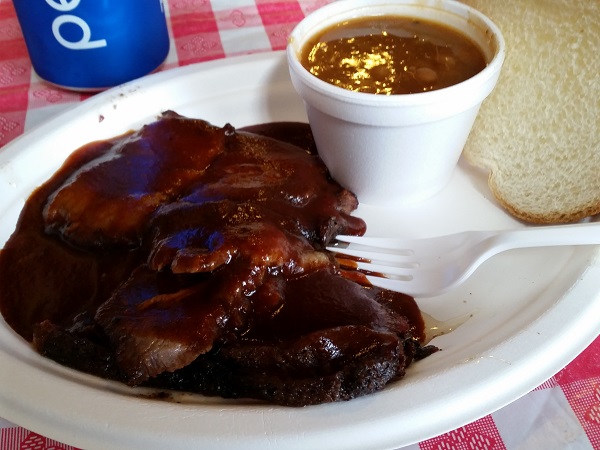 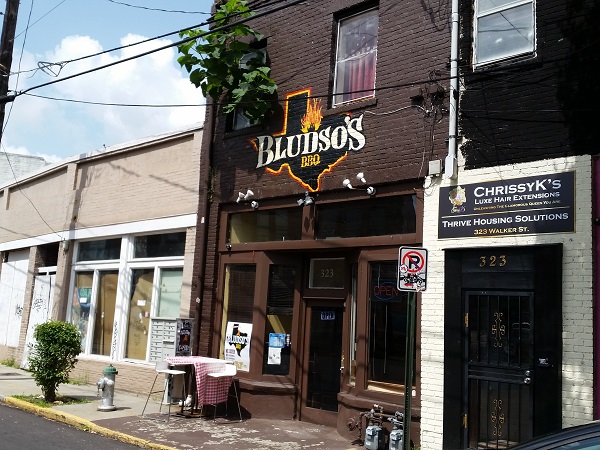 So, let’s acknowledge my rookie mistake in not ordering my meat dry, and let’s compound that by adding that Andy’s story very clearly explains that these guys dump way too much sauce on their meat and you should definitely tell them to hold off on that. But on the other hand… what in the world is a Texas-themed barbecue joint doing pouring all that sauce over their lovely beef in the first place? While my actual experience with Texas barbecue in the state of Texas itself is non-existent (we take checks), this is not what I have read about. In point of fact, two months ago, that state’s governor, Greg Abbott, made the remarkable statement that “the most important thing about barbecue is sauce,” prompting even the most diehard Republicans in that state to fan themselves with ten-gallon hats and wonder whether they should have voted for Wendy Davis instead.

I used the bread to sop up as much of the sauce as I could, and underneath it found some very, very good brisket. Again. This is happening more and more. Good chopped pork is the best meal in the world; nine times out of ten, I’d rather have chopped or pulled pork than any other meat at a barbecue place. But finding so much pulled pork that’s just okay lately and so much beef brisket that’s better in every way is really unusual and deserves some comment. I liked this a lot. The meat was tender and had a good bark, a little more fat than I thought that I wanted, but just enough to prove me wrong. This is good, good stuff. It does not need to have all that sauce ladled over it. They should knock that off immediately.

The restaurant, which seats maybe thirty people on two floors, is in the Castleberry Hill neighborhood, at the end of Walker Street where it meets Peters. Street parking’s available here and there, if you can find it. It’s not the nicest corner in town. I was accosted on the street by an “entrepreneur” looking to sell an alarm system, five bucks, still in the box. Well, a box. I’d like to head that way again sometime, despite the local businessmen, and have the rib tips and some more brisket. Dry.