We were very much overdue for a trip to Columbus, and when our friends from Spatialdrift suggested that we take a road trip somewhere or other, Columbus, the state’s second-largest city, was the idea we eventually settled on. So one day last month, with the temperature in the low nineties and humidity at what felt like 200%, we motored on down and arrived at one of the barbecue joints that I’ve been wanting to visit for years. Chicken Comer – I will spell it as the sign does, although “Comers” and “Comer’s” are also seen – has had a number of ownership changes, but traces its lineage back in a zig-zagged line to the late 1920s.

Terry Bussey is the current owner of Chicken Comer; he started running things in February 2012. But the original sauce – about which more in a moment – was developed by Anderson “Chicken” Comer in 1929. He may have been called “Chicken” because he had a reputation for stealing them! He started selling barbecue from his house in Phenix City AL, and later moved into a building where he kept the business running until his death in the early 1990s. A great-niece, Mary Screws, inherited the business, but it closed in 2002. About six years later, Carolyn Curenton bought the restaurant and reopened it in Columbus in a location on Desmond Drive, right off Veterans. 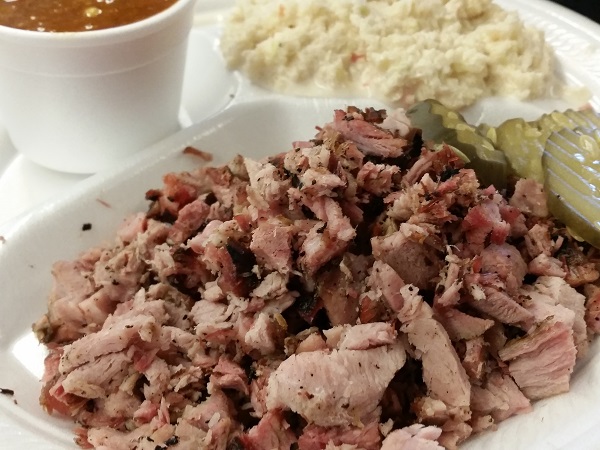 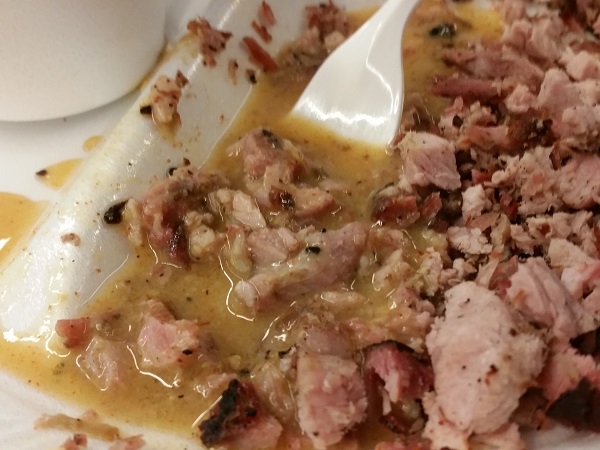 Longtime readers may recall that the Columbus-Auburn-Eufaula area is home to particular cooking and sauce traditions. Among these are an indoor fireplace pit, with the meats placed closer to the fire than in other regions, and wood fed from the outside. At Chicken Comer, they use a mix of oak, hickory, and pecan.

We’ll come back to the region’s usual sauce in the next chapter, though, because Chicken Comer’s sauce is very unlike the standard for the area. While mustard-based, it is much thinner and a whole heck of a lot hotter. In fact, the mix of cayenne and mustard is very, very close to the mustard sauce that you can sometimes find in barbecue places in Atlanta’s western suburbs (see this story about Wallace in Austell GA for more on its appearance in the Atlanta area). I’ve never heard where the mustard sauce in the Carrollton/Douglasville/Austell region originated, but it looks very much as through it came from Phenix City and migrated north. I’ve been known to call it “crazy hot lava mustard sauce,” but perhaps “Chicken Comer mustard sauce” should be the correct name. I don’t want to swear that it’s identical, as this is a tad thinner than what I’m used to, but the mix of flavors and the heat level are the same.

The pork is just terrific. It’s really pink, and when it’s sliced, it gets a lot of black, crusty bark. Everybody was very pleased with it. It’s not too moist, but it’s really flavorful, and I certainly recommend ordering it dry with the sauce on the side. Presauced meals are typical here, but the pork is so interesting that you really should give it a try on its own before you drown it. You can even spice it up with a little more cayenne if you like, but be cautious. This may not be the hottest barbecue sauce I’ve ever had, but it might be the hottest “standard” sauce. They do make a mild one as well, but the hot one is the default. 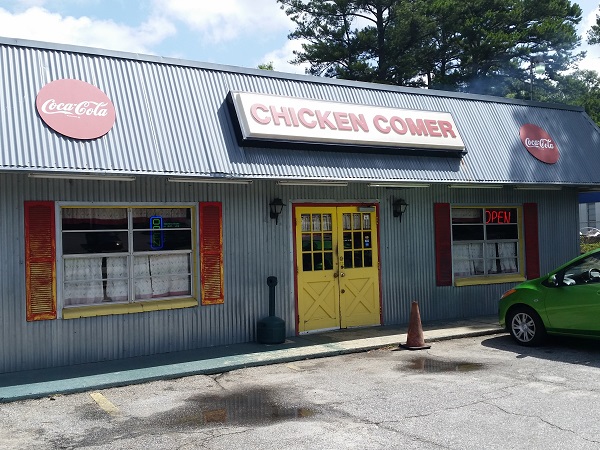 Stew is available as a side for a small upcharge, making this one of the very few places outside Atlanta to charge extra for it. It’s a pretty good stew, served piping hot. It’s very thin, with lots of meat and vegetables, including lima beans, but no filler.

We all really liked this stop. Marie, who had a sliced pork sandwich, finished off with an order of fabulously good banana pudding and was very satisfied. We’d sample a more traditional Columbus-area barbecue experience at the next joint on my list, but I think we all preferred Chicken Comer’s pink, crusty pork to it. It’s definitely on the list of places worth a return visit one day.