I wouldn’t be a good tour guide to Columbus if I didn’t make certain that anybody traveling with me had the chance to try a scrambled dog. (Note: I’m probably not a good tour guide to Columbus, period, but that’s neither here nor there.) So while we were at Chicken Comer, I noticed that they offered scrambled dogs on the menu. I asked Adam and Emily whether they’d ever had one, or even knew what they were. Since they didn’t, we took a quick detour to Dinglewood Pharmacy so that they could enjoy one. Of course, doing that meant that I had to indulge a little bit as well, and also have a hand-mixed cherry lemon Sprite, so by the time we made it to Macon Road Bar-B-Que, bellies were a little bit full. Marie passed on trying anything here.

One day, I hope that somebody sits down with everybody who owns a barbecue place in Columbus and eastern Alabama and really digs into the origins of the preparation style and sauce that is unique to this area. Macon Road serves up chipped barbecue with a yellow-orange mild mustard-based sauce that is very similar in flavor and texture to what is served at Smokey Pig in town, and at Chuck’s in Opelika, Price’s in Auburn, and other places. Nine years ago, John T. Edge interviewed Chuck Ferrell for the Southern Foodways Alliance and learned a great deal about the Ferrells and the Gunters and their place in the region’s history, but there’s a lot more that should be learned. 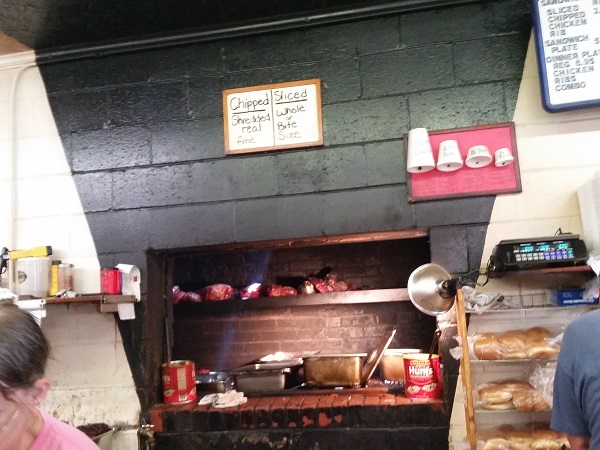 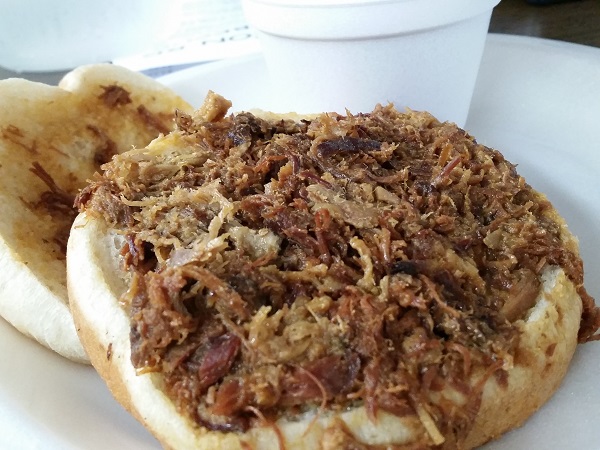 For example, after we finished our meal, I spoke for a couple of minutes with “Big Daddy” Starling about his sauces, and about the history of his restaurant. He originally opened in 1965, on the opposite corner of Macon Road and Avalon, and moved to this location in 1985. I wished that camera phones were all over the place in ’85, because the moving process included carting the giant counter across the street loaded across two pickup trucks facing away from each other. Even with only a couple of hundred feet to travel, that must have been a sight to see. Mr. Starling told me that he does not know the Gunters, and developed the house sauce on his own in the 1960s. He doesn’t consider it a mustard sauce, even though mustard is one of the principal ingredients. His actual mustard sauce is a little different, and is an attempt to replicate the Chicken Comer hot mustard recipe. He sent me home with a sample cup of this, and it is indeed very, very similar to Chicken Comer’s, and to the hot mustard available in Carrollton, Douglasville, and other places in western Georgia further north than Columbus.

As for the meal, the meat at Macon Road is indeed very similar in texture and flavor to what you find at the other places mentioned above. I quite like it, and really like that you can’t get anything really like it outside the area. It’s cooked much nearer to the flames than is usually seen anywhere else in the southeast, giving some of the meat a very nice, crispier bark. The owner firmly believes the effect can never be replicated with gas cooking; you can only get this texture with wood. The tangy sauce, mild with just a little spice, goes really well with it. 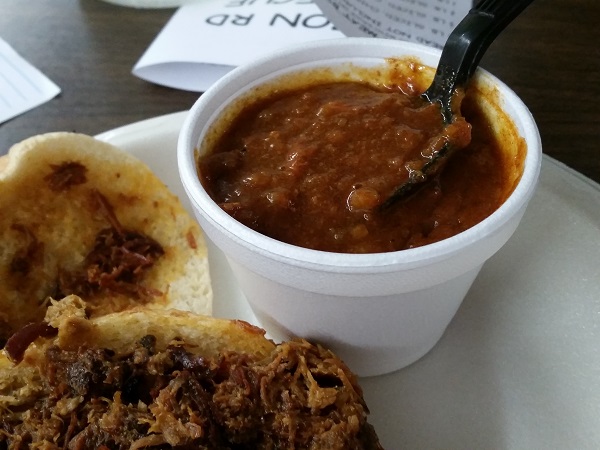 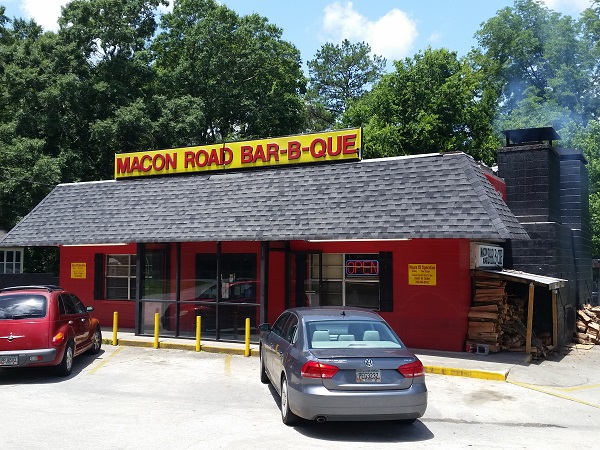 To be honest and fair, as much as I enjoy this preparation, I did prefer the pinker chipped pork at Chicken Comer somewhat more than this. However, Macon Road’s stew was out of this world. It’s a thick brown brew, much darker and richer than Chicken’s, with fewer vegetables. I recall that, across the river, 13th Street makes a not-dissimilar stew, just absolutely packed with flavor. I liked the barbecue, but I loved the stew.

Mr. Starling told me that twenty years ago, Farmers Almanac declared that Columbus and Phenix City had the best barbecue in the country. That’s a claim that doesn’t often make the rounds, and it annoys me that twenty year-old editions of Farmers Almanac are not available online for me to read the story! However, while I’m not quite prepared to agree with the magazine, it’s indisputably true that Columbus and Phenix City, and west and south over to Auburn and Eufaula, make and serve barbecue unlike anyplace else in the country. What you get here is unique, flavorful, and terrific, and everybody in the barbecue blogging bizness needs to come this way and try it for themselves.