If only we had every weekend free to travel and write about food, then we would have visited Chuck’s in Opelika at least three years ago. We had popped into this corner of eastern Alabama, via Columbus, back in 2010, and I guess that not long after that, I read John T. Edge’s terrific interview with the owner, Chuck Ferrell, which he’d conducted in 2006 for the Southern Foodways Alliance. (Readers should definitely check that out, along with all the dozens of other oral histories at the Southern Foodways site. It’s all terrific stuff.)

Well, time got in the way, and I just never found myself in Lee County again until last month, when the wonderful people at the Auburn and Opelika Tourism Bureau shared some information about an amazing and new restaurant that they wanted us to try. We’ll tell you about that next week. First up, we wanted to rummage around the area for some older places that we missed when we roared through in 2010 and visited Toomer’s Drugs. Chuck’s was top of the to-do list, and it did not disappoint!

For the benefit of newer readers, I should point out that this little region, which stretches from Lee County in the west, down south to Eufaula, and back north and east into Georgia around Columbus, is home to a particular mustard-based barbecue sauce that is not duplicated anywhere else that we’ve found, and nor is it quite like the “gold” mustard sauce that is seen in South Carolina (and in lots of Atlanta restaurants that have a bottle of it for folk from Columbia). The sauce is a dark orange, typically a blend of mustard, ketchup, vinegar, onions, and brown sugar. 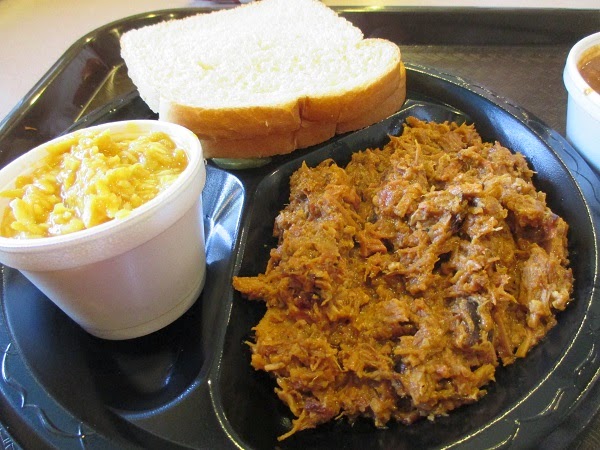 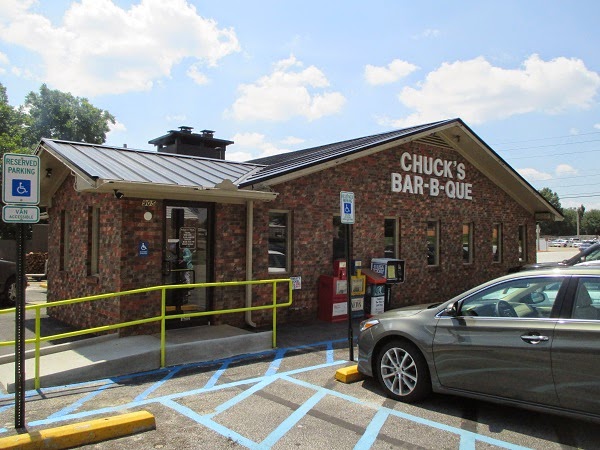 The barbecue dynasty in this region would be the Ferrell and the Gunter families, and it stretches back sixty-one years to the founding of Smokey Pig Barbecue in 1953. It’s Chuck Ferrell’s memory that his uncle Buck brought the recipe for this sauce from a drive-in where he worked (the original Clearview on Victory Drive, most probably an ancestor business to the Clearview BBQ that still operates today). Various Gunters and Ferrells have operated barbecue joints in this region for decades, and when I spoke to Larry Gunter at Smokey Pig in 2012, he mentioned that some of the region’s restaurants were opened by former employees, and, in the interview linked above, Chuck Ferrell mentions that he also helped friends and former employees start their own businesses over the last forty years.

Chuck’s feels a lot like Smokey Pig does. It’s a very 1970s building, with utilitarian fast-food booths and a long counter where employees can pull barbecue straight from the fireplace. One of the secrets to the preparation here is that the meat – the picnic cut below the butt, if I understand correctly – is not cooked indirectly, “low and slow,” but directly above the flame and fast. Chipped pork is another common feature of this area’s barbecue. The chopped pork is cut up again, finer, and marinated in the sauce above the flame. Guests can order sliced or unsauced pork, but the most common meal is this chipped variety, so that’s what I ordered.

Another common menu item in the region is BBQ slaw, which, like red slaw in the Piedmont of North Carolina, is slaw made with the area’s typical barbecue sauce instead of mayonnaise. You can also find this in all of the places that followed in Smokey Pig’s and Chuck’s footsteps, like Country’s and Mike and Ed’s. And, courteously for the pickle-phobic among you (and you know who you are), the pickles are discreetly hidden under sliced bread in a separate section of the plastic plate, where the juices can’t mix with the meat. 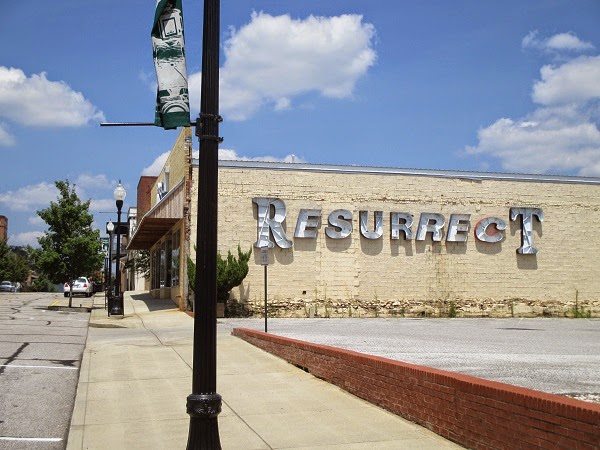 The first Chuck’s opened in 1974 in the nearby town of Valley, but business was slow and they closed in two years, relocating to Opelika, where they’ve been doing very well ever since. After lunch, Marie and the three year-old and I enjoyed a walk around Opelika’s downtown. Many of the storefronts were vacant, including, sadly, the one that had belonged to an antique mall called Resurrect, but we found some yarn, and kids’ shoes, and some books from a bookshop that was not anywhere close to where I thought it was. More on that in tomorrow’s chapter…