A couple of months ago, I posted a chapter about a barbecue place in Columbus GA called Chicken Comer. This seems to be the origin of a very interesting mustard sauce that is occasionally found in Atlanta’s western and northwestern suburbs. It’s lava-hot, laced with cayenne, and I wondered how Chicken’s sauce, which was developed in Phenix City AL around 1929, had become standard on the tables of restaurants in places like Austell and Douglasville GA.

There’s another restaurant where this sauce is on the tables, and it’s one of those places that, looking back, I hadn’t really done a good job covering. Barbecue Street opened in 1989. I had an okay meal there in the early 2000s, and another okay meal there on Christmas Eve 2011. But that wasn’t really fair and I probably shouldn’t have written a blog post about that anyway. I let my race to write get ahead of matters. Seriously, no restaurant can be expected to bring its A-game on Christmas Eve, and my daughter, little angel that she frequently is, was letting the devil on her left shoulder talk really, really loudly that night. (For completeness sake, here’s that story. Don’t bother reading it.)

Among the fumbles that I made in that original story was this: I was trying to identify places in the region that serve their barbecue in the Hudson’s/Wallace style, with the meat given a bath in the thin, black-red vinegar-Worcestershire sauce that these businesses have popularized. In 2011, I asked for the meat dry, and since none of the four bottled sauces on the table were much like Hudson’s sauce, I concluded, erroneously, that they don’t have a sauce like this. They do, just not on the table. You can order the meat dry, but it normally comes in a bath of the thin sauce. 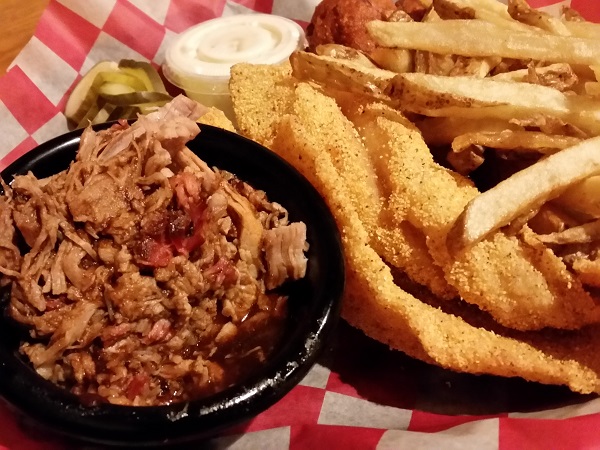 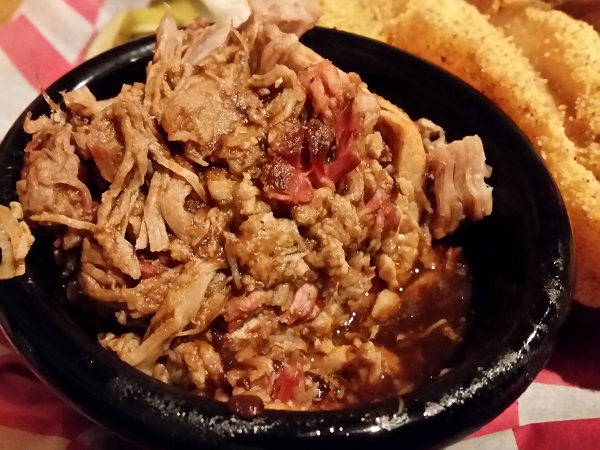 But where do both of these familiar sauces come from? Marie and I were pleased to talk a little with Malcolm Wood, co-owner of Barbecue Street, about the history of the business and he shed a little light on that. Replicating the presentation of the Wallace/Hudson’s style is deliberate, as that sauce was more known in the area when this restaurant’s predecessor, Bell’s, was active in the 1980s. And the cayenne-kicking Chicken Comer-style mustard sauce does indeed come here by way of Phenix City, but it took a tiny detour getting here. Wood picked up on the idea of a hot mustard sauce from his time working at a Country’s Barbecue in Columbus. Now that I’ve had a closer look and know what I’m supposed to be looking for, I see that the Street’s mustard sauce is not identical to Chicken Comer’s, although it is quite close.

What I don’t know, regrettably, is how long the hot mustard options have been floating around Atlanta’s western suburbs. I need to dig a little deeper. Along with the hot mustard, there’s a hickory sauce which is akin to a brown Memphis sticky-sweet style, Georgia red, which is the ketchup-based style cut with vinegar that we frequently see, and a terrific red onion sauce, which isn’t much like anybody else’s. It’s mild, but very tangy. 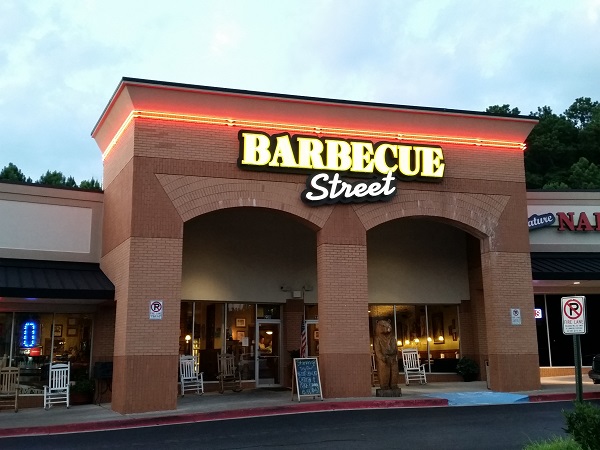 Anyway, this trip was much, much better than my previous two, which were certainly not bad, but didn’t leave me ravenous to return. This time out, everything tasted very fresh and I also got to try the catfish, which so many people praise online. This really is good catfish, with a very mild “crumb-crisp coating.” They were offering a great $13.99 all-you-can-eat special of chopped pork and catfish. I didn’t munch on too many fries.

I did, however, dig into the Brunswick stew, which was awesome. Wood has recently changed the recipe, and it is absolutely full of meat, with no fillers at all. Wood grew up near the middle Georgia town of Montezuma and learned to make barbecue and stew with his father and the local fellows. This is a classic Georgia Brunswick stew like you find at older restaurants and shouldn’t be missed.

Barbecue Street is certainly an old-fashioned family restaurant. It’s not on the cutting edge of new barbecue styles, fashions, and hype, although the restaurant does frequently feature at things like Taste of Kennesaw or the city’s Pigs & Peaches BBQ Festival. It’s just classic, simple Georgia barbecue, highlighting some techniques that go back generations. It may not be trendy or fancy, but it’s better than I knew, and it’s worth reevaluating, so do check it out.