If you drive west on Whitlock away from the Marietta Square, you’ll soon come to that dying strip mall which is home to the very good Dave Poe’s BBQ. Beyond that is an unusual and very small shopping center, built in a zig-zag style that was briefly fashionable in the late 1960s. Over the years, several businesses that I’ve found interesting have set up there, including a record shop and a comic store. Those are gone, but today, you can find a place to buy vintage video games, and a more traditional gaming shop. Anchoring the plaza on the street side is Hoboken Cafe, which opened two years ago and which I had never noticed before.

Proving the power of good advertising, one night not long ago, we went to supper at Lemon Grass on the other side of Marietta, and I saw a truck advertising Hoboken Cafe parked in the lot. One of the signs noted that they make their own mozzarella in-store. I immediately thought “Boy, freshly-made cheese might be really good on a chicken parm.” And chicken parms were on my mind because there’s this remarkable thread on the Roadfood forums about Connecticut grinders. I’m sure some people in Connecticut believe their chicken parms are much better than what you can get in New Jersey, but down here, we make do with what we can get. And we make do with living vicariously through the drool-worthy photos on that thread.

In fact, I was so intrigued by that thread that, a couple of weeks ago, I went to have a chicken parm from Baldinos, one of my favorite sandwich shops in town, instead of my usual Sicilian. Shows how I pay attention. Baldinos doesn’t make chicken parms at all! But maybe the Hoboken Cafe could knock one out of the park? 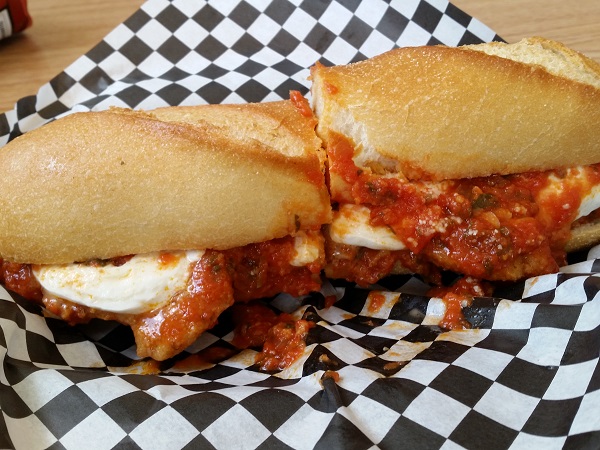 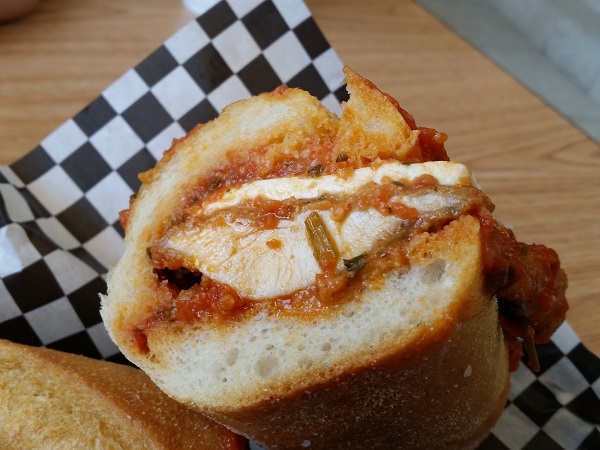 They did. Home run first time at bat. If there’s a better chicken parm in the Atlanta area, it’s news to me. I love this crispy bread, the sauce, and this amazing cheese. This is a terrific sandwich.

The boychild and I talked with the owner, an older, soft-spoken man who goes by “Johnny Pizza.” Well, the kid munched on chips, a basic Frito-Lay variety, and I talked with him. He feels very strongly about quality, which accounts for the higher-than-normal prices (sandwiches run about $10 here), but is it ever worth it to get such good bread and cheese with your sandwich. I promised that I’d be back soon, because I came in wanting a chicken parm, but there was a photo on the wall of the Hoboken Hero, with ham, salami, provolone, lettuce, tomatoes, onions, oil and vinegar with hot peppers, and it looked so good that I needed to have one. 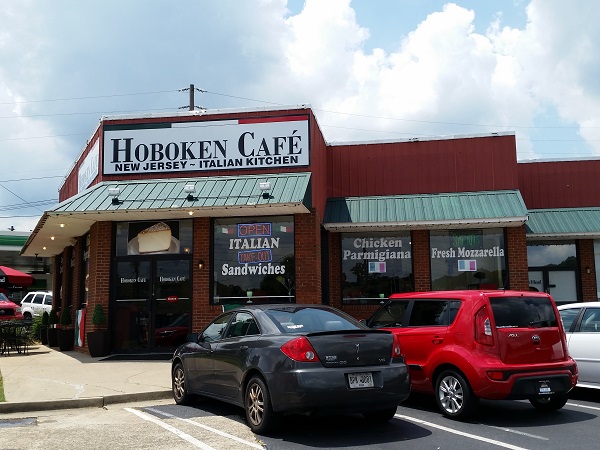 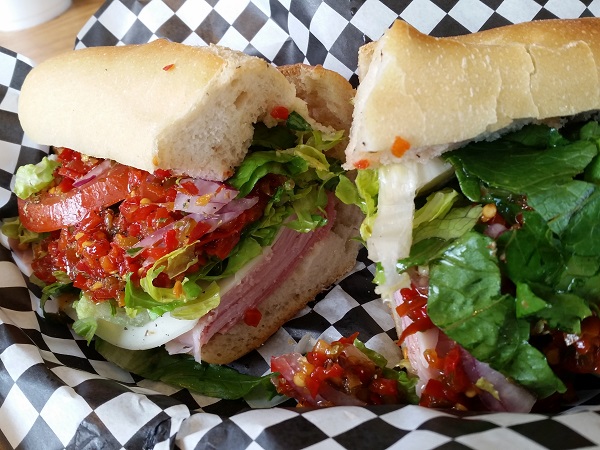 We were back one week later for the hero, which was really terrific. Johnny Pizza says that you cannot scrimp on oil and vinegar, which is where many sandwich shops do wrong. You can taste the quality. It’s a messy sandwich, leaving hot peppers falling all over your plate, but delicious. My only reservation was that I was not as wild about the bread on a cold sandwich as I was the hot chicken parm. With cold cuts, I prefer the nice, pillowy bread that Baldinos makes inhouse, although the bread was just right for the chicken parm. Meanwhile, Marie and our son shared a very simple sandwich with ham, salami, and mozzarella. She shared a few bites of the cheese, which is excellent. It’s salty, but quite mild, too.

The girlchild asked to just have two cannolis, which my wallet immediately agreed to, because I get thrifty when all four of us are at lunch, but, remembering how she gobbled down that burger at Big Chief, I made sure that she saved me a taste. Man alive, these might be the best cannolis in the city as well. The cream is just perfect. If you have ever enjoyed a cannoli as dessert at an Italian restaurant, you’ll enjoy these even more.