As best I can remember, there have been three times in the last six years where I’ve had to just stop eating because the food was too spicy. The first time was our visit to Prince’s Hot Chicken in Nashville TN. The second time was when I left some chicken marinating overnight in the mustard sauce that I bought at Billy Bob’s in Carrollton GA.

Let me tell you about the third time. 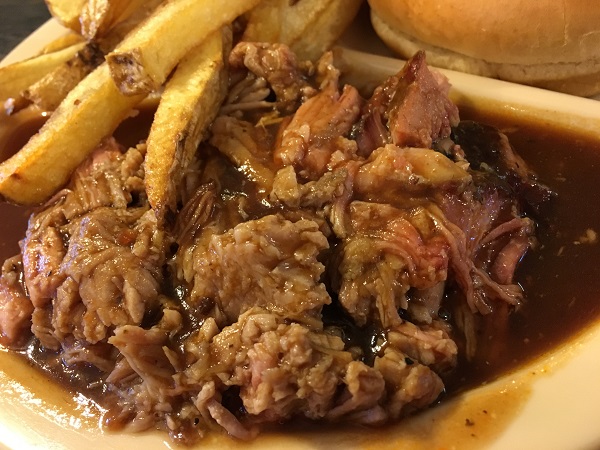 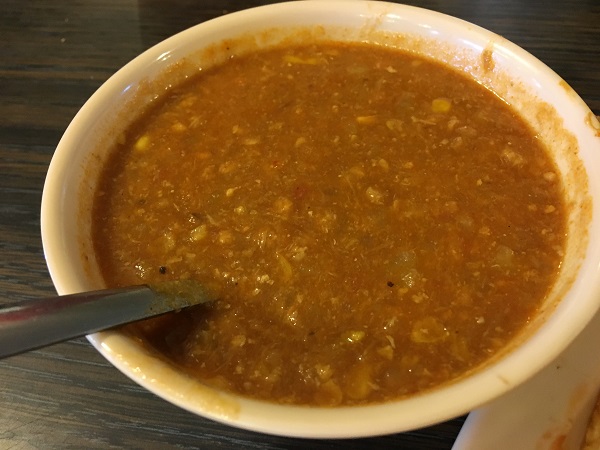 We were in Douglasville to make a return trip to Hudson’s, which I briefly visited in 2011, and also to stop by a couple of book and comic shops, and give our son about an hour of playground time at Deer Lick Park. After we’d finished everything else, we stopped into Hudson’s about 3, and the place was still really busy. It’s been an incredibly popular area restaurant since it opened in 1971.

Regarding the barbecue sauce here and its origins, I did not coin the term “Hudson’s sauce” myself, although I do seem to have helped popularize it. Way back in the old days of the Internet, I used to have this awful (awful) barbecue page. It wasn’t on Angelfire like everything else was back then, but it was on Geocities, and it was awful, but I got lots and lots of emails from people then, and people kept using the term Hudson’s sauce, and so – almost – did an acquaintance of mine who lived near Hiram (I think he still might) and who called it “Hudson’s juice.” This is the thin, black-red Worcestershire-vinegar mix that is specific to Atlanta’s western suburbs, and is occasionally seen in pockets north of town, as far away as Jasper.

Not long ago, one member of the Wallace family left a comment and raised a polite point that the sauce should, if anything, be called Wallace sauce, as Buford Hudson learned the recipe from the Wallaces in the 1960s. With the greatest of respect to the Wallaces, however, my old correspondents and acquaintances never once called it Wallace sauce.

But it wasn’t the regular sauce that brought me out this way, it was the hot mustard. All of the restaurants in the Hudson-Wallace footprint, and a few others besides, offer this hot mustard. This is the stuff that I have called “crazy hot lava mustard” and, in 2015, traced to the Columbus-Phenix City region. This sauce is more accurately termed Chicken Comer mustard, and I have been trying to discover when this mustard made its way to the Atlanta area and who introduced it. I was not, however, expecting it to burn the absolute bejesus out of my mouth. 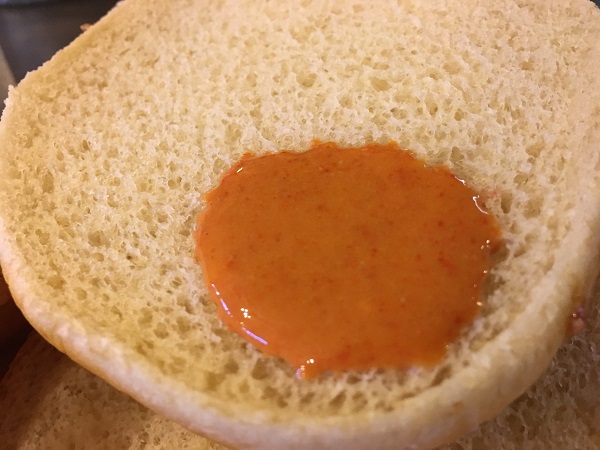 I’ve had this style of mustard many, many times at several restaurants; I’m not new to it. But sometimes when a new batch gets mixed up, somebody is going to drop in a little more cayenne than usual. What was in the bottles on this trip was insanely hot. I had a splash on bread, and dabbed my fries in it, then I mixed a little in with my stew, as I do, and then, after I finished my chopped pork, I had a second bite of sauce on bread and my mouth said, bluntly, “No more food for you.” I was in agony. I sipped water and finally got a mouthful of ice, which led to the really fascinating sensation of having my teeth and gums pained by cold while I shivered and my tongue still screamed like somebody’d dragged a blade across it.

Neither Buford Hudson nor his son Scott were in when we visited, but one of the servers had some information. She confirmed that the mustard sauce is made regularly in their own kitchen, although the stew is made by Wallace at what she called “the stew house” in Austell, where it is distributed to Hudson’s, to Hiram’s Briar Patch, and a couple of other places. She confirmed that there was, or maybe there had been, a family relationship between Briar Patch and Wallace, somebody’s in-laws had opened it, accounting for the very similar flavors between these restaurants. The sauce at Briar Patch, on my most recent visit, was thicker than Hudson’s sauce usually is, but the mustard was what I expected to find. (It didn’t kill me with its spice level, either.)

But how and when did Chicken Comer’s mustard sauce make its way into this group of restaurants? We learned that the Wallaces and Buford Hudson once worked at a restaurant in Mableton GA called Old Hickory BBQ in the 1950s, and that they used the mustard sauce then. I don’t believe that this mostly-forgotten restaurant is related to the later Atlanta-based barbecue chain Old Hickory House; it only comes up in conversation about Hudson’s, as in this 2010 interview for the Southern Foodways Alliance.

Somehow Chicken Comer’s sauce made it from Phenix City in the 1930s to Old Hickory in the 1950s. Did one of the older Wallaces discover Chicken Comer’s mustard while visiting the Columbus-Phenix City area, or did somebody come this direction with a recipe in their pocket? I would love to connect a few more dots one day.

Oh, yeah, that second time mentioned above, where I had to throw out my lunch because the meat I left marinating in the mustard sauce was too hot for human consumption? It was Chicken Comer sauce. That’s what Billy Bob’s serves, too.