A few Fridays ago, I found myself heading west out I-20 after a short morning at work, bound for Lithia Springs to try a barbecue place. I had all the time in the world, and I needed to stop at a Publix to use an ATM. I remembered that there was one in Douglasville, so I went along a little further, just enjoying some music and a very pleasant morning’s drive. It wasn’t until I was on the exit ramp that I remembered that I’d been meaning to stop by Hudson’s Hickory House and that it was supposed to be around here somewhere. I recalled reading on a blog called Courthouse Bites that it was somehow near the Douglas County Courthouse, and I was certain that I could find that. It turns out that the restaurant really isn’t anywhere near the courthouse, but it is next door to the sheriff’s department.

This might perhaps be the last entry in which I wonder aloud about the origins of a particular regional style of barbecue, detailed in these earlier chapters: Wallace in Austell, Briar Patch in Hiram, Johnny’s in Powder Springs and the deliberate homage at Davis in Jasper, although I have learned that there might be another in the area that has a similar style. Apparently, the proprietors of a place that might be called Hog Wild somewhere south of Douglasville* got permission from Buford Hudson to use his style of hickory-smoked pork and thin, red-to-black vinegar sauce. It was my server’s contention that Hudson is the man who came up with this recipe forty years ago. I wish that he had been available to speak with me; I think that I would have enjoyed a chat with him. 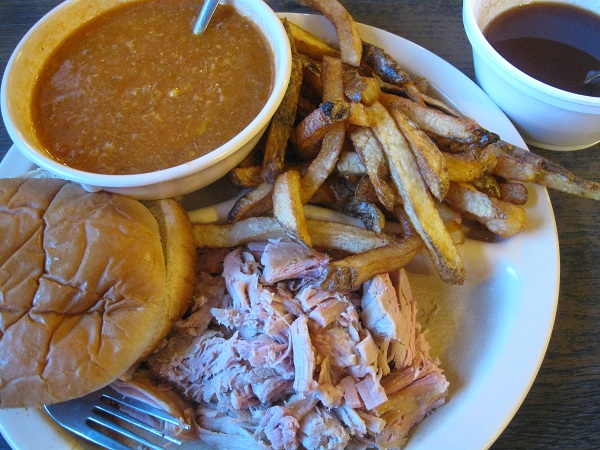 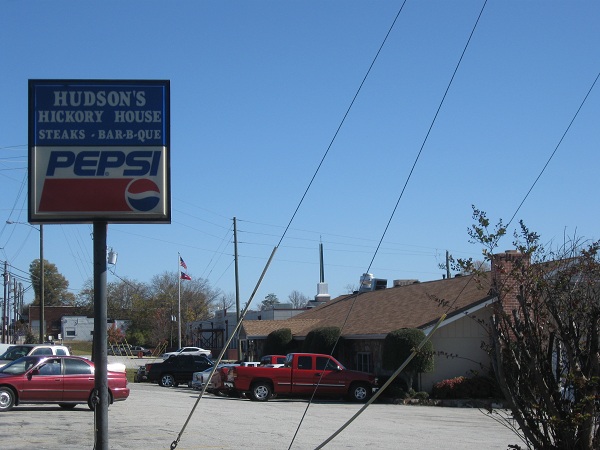 Well, my server did not know about Briar Patch, but she did confirm that both Wallace and Johnny’s are welcome to use Hudson’s recipe, and, in return, Hudson’s uses Wallace’s recipe for stew. As with the others that use this style, the meat is, unless you ask ahead of time, served completely drowned in the thin, red-black vinegar-based sauce, and there’s a bottle of truly hot mustard-pepper sauce if you order the meat dry and would like to try both. Interestingly, the mustard sauce at these five places is not quite like the mustard sauces of South Carolina, or in the Auburn-Eufaula-Columbus triangle. Those are thinner and yellower and less potent. This sauce is more of an orange-yellow and it’s quite firey. After a few bites of the dry, quite moist pork with this tough customer, I conceded and just drowned the meat with the red-black vinegar sauce, as its creator intended.

Georgia often gets a very short shrift from barbecue writers, as we allegedly have no traditions of our own to compete with the better-known styles of Texas, Kansas City, Memphis, Owensboro or the Carolinas. I would humbly suggest that, while its influence is small and its home region mostly confined to Atlanta’s western suburbs, this is something that we can genuinely hold up as a Georgia original. I certainly haven’t found it anywhere else. It may not be to everybody’s taste, but it is unique, and it is ours.

*I found reference to a place in Carrollton with that name, and I suppose that it might be the one that my server mentioned.