I thought that I had made a very important discovery at Jasper’s Davis Bar-B-Que – well, important in terms of looking for tradition and history in preparing food, anyway – but I was mistaken. I actually found just a fun and very tasty curiosity.

Longtime readers may recall that I’ve stumbled upon some very similar sauces and preparation styles among some barbecue shacks in Atlanta’s western suburbs. Not, apparently, highlighted by any other bloggers – and not, flatly, followed up by me the way that I should – there is a small regional tradition of serving chopped pork swimming and drowning in a thin, black-to-red sauce particular to these restaurants. Places known to serve it this way include Wallace in Austell, Johnny’s in Powder Springs, and Briar Patch in Hiram. They all send it out drowned in the thin sauce, and they all offer floppy hand-cut fries, and they all have a powerful, spicy mustard sauce on the table, which you can only use effectively if you order the meat dry. I have commented on the similarity, and I have noted that another place in the region, Hudson Hickory House, is said to offer something similar, and I have intended to go out to Douglasville and learn a little more about where this originated.

Thinking this just a western-suburb specialty, I was quite surprised to get an incredibly similar plate of chopped pork up in Jasper. Davis Bar-B-Que is located about halfway between the end of I-575 and the retail-packed traffic light of Jasper’s commercial strip, nowhere near the home base of this dish, yet here was my meat, swimming in a blacker-than-red but just as thin and very similar tasting sauce. There was a bottle of pistol-packing mustard. The fries weren’t quite so floppy here, mind.

Questions needed to be asked. 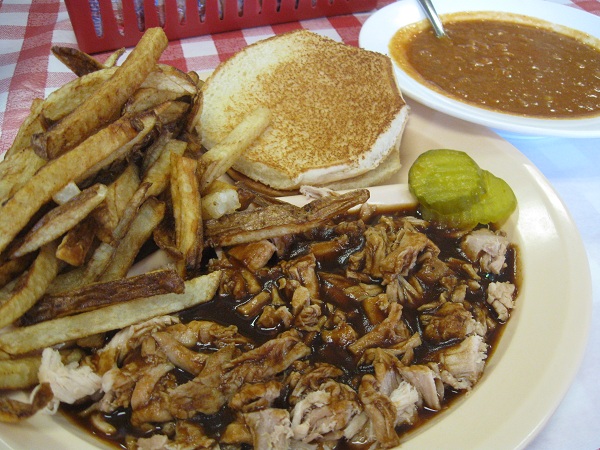 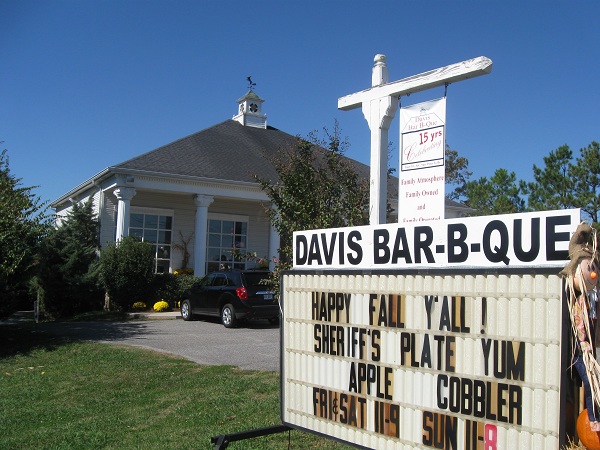 Davis Bar-B-Que is located just about a mile from the main road, behind and alongside a church, across from that church’s cemetery. From the front porch of this faux antebellum house, guests can look out across the graveyard and see the rolling mountains of Pickens and Dawson Counties. In October, it is a gorgeous and amazing sight.

The house was built in the 1960s as the home of Antebellum House Furniture, makers and distributors of Davis Round Tables. After a few decades, the family elected to enter the restaurant business instead, turning the old showroom into a dining room. The building was severely damaged during a tornado some years ago, and closed for a time as it was rebuilt from a two-story house, as depicted in an illustration on the menu, into the one-story property that it is today. There are photographs in a frame near the door showing the reconstruction.

The sauce turned out not to be a very old family recipe that made its way into the foothills of the north Georgia mountains. I mentioned, diplomatically, I hope, that it reminded me of the sauce at Wallace. It turns out that Davis’s is a deliberate homage. As Wallace served the family’s preferred style barbecue, they set out attempting to match their signature sauce and presentation. The prices, like the ones at Wallace, are great, too. A whole pile of pork, stew and a second side comes to just $7.30.

I think that, if you’re a guest in your early forties or late thirties, it’s impossible to eat at any of these places without the old ABC Saturday morning jingle about Louie the Lifeguard and not drowning your food running through your head. It might not be to everybody’s taste, and it might be more sauce than this meat really needs, but it’s all good, and certainly worth looking into. I am glad that we stopped by. We learned a little something, after all.