This is Marie, contributing an article about apples from the Panorama Orchards. Grant and I ran across this family farm operation last year when we picked them essentially at random from the multiple apple vendors along the route to Ellijay to eat barbecue. We were only vaguely aware at the time that we were going up on the day of the apple festival there. It was only through sheer good luck that we arrived before the crush of traffic.

Ordinarily I would be all about the apple festival. Who wouldn’t want to try over a dozen varieties of apple, along with pies and breads and cider and all the other fun festival treats? There is also an antique car show and more crafts vendors than any right-thinking person could stand. Sadly, the highway that people have to use to get there would need to be about three lanes wider to keep the traffic moving. As we drove home from our early shopping and lunch, the crush of crawling cars in the oncoming lanes made us vow never to go to the apple festival unless somehow cars were not involved. Which is kind of sad, because quite a few people seem to think it’s worth the abysmal traffic to get there. Mind you, nearly all of them come from Atlanta, which has traffic that only Californians, New Yorkers, and D.C. residents can diss. 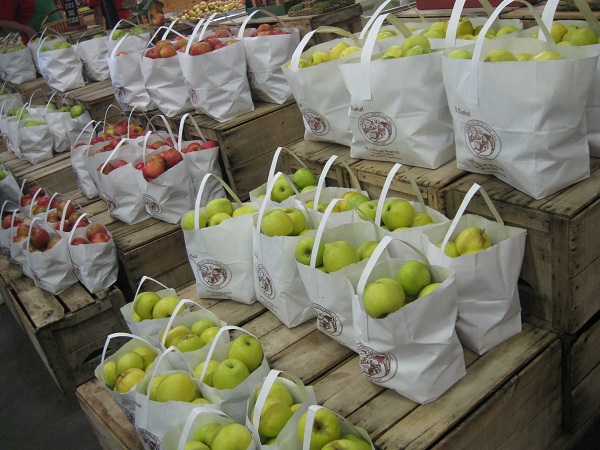 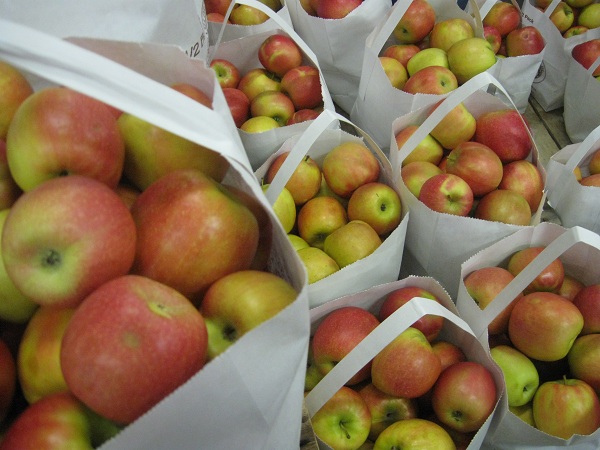 But I was talking about Panorama Orchards, just one business among the many in the area, which has captured our loyalty with the really excellent product they offer. Although there is a possibility that we might go to Walker’s Fried Pies & Barbecue for a little variety.

There really isn’t a way to get a good photo of the place, and so the terrible pictures that I took were discarded. There are too many people parking and walking around the front doors. Hey, they need to get apples too. Inside the place you pass through the baked goods and dried fruit and preserves first, then pass the testing table. That has a really generous selection of stuff on it, including some really impressive apple cider that I yearned to chug by the gallon, and some apple salsa that captured Grant’s heart. I got some of each to bring back. There is also ice cream, old-fashioned candy, and more preserves.

But of course the main feature is the apples. There are people in the back who clearly spend their whole day restocking. They usually have about 6 varieties to choose from at a time, depending on what is ready for picking, and there are endless samples all over the place. There really is no way to leave the place without having put at least one thing into your cart that wasn’t planned for, unless you walk through with your hands in your pockets and your mouth clamped shut. And who could enjoy life that way?

I bought two half-pecks each of Granny Smith and Mutsu, and a full peck of Fuji because that’s what the family likes. I have had an apple nearly every day since our trip. Yum.