Somewhat overlooked in all the talk of regional barbecue styles is that there is a little outpost of restaurants in western Cobb County and Douglas County that all have very similar takes on presentation, sauce and preparing the chopped pork. I know that I’m not the first one to notice this. I wish that I could take credit for it, but somebody who actually deserves credit – and, you probably know me, I’m just not very good about remembering where I read things – noted an interesting similarity between the chopped pork at Austell’s Wallace Barbecue and a place in Douglasville that I have not yet tried, Hudson Hickory House in Douglasville. I made the connection, but didn’t note it anywhere, between Wallace and Briar Patch Restaurant, which is near Dallas and Hiram. A couple of weeks ago, I revisited Johnny’s Bar-B-Que and Steaks for the first time in four or five years and realized just how similar this place is to the others.

If you pull up these on a map, you’ll see that they’re all in the same little quadrant, north of I-20 and east of I-285. Now, I can’t speak with certainty about Hudson Hickory House, but I have seen a photograph of a chopped pork plate at Courthouse Bites and read a description of the meal at BBQ Biker and I think I’m on pretty safe ground when I discuss it in general terms. All four of these older restaurants serve very soft chopped pork that is presauced and swimming in a very thin, red-to-black, mild and very tangy vinegar-based sauce, while also offering a much hotter mustard-based sauce on the table. The fries are freshly-cut, whole potato-style and very greasy. BBQ Biker describes Hudson’s as “floppy,” which can certainly be used to define the fries at the other three restaurants. The stew at each is very thick, heavy on the onions but not too many other vegetables.

When I do get the chance to visit Hudson’s, and I will, soon, I will definitely have to ask about the similarities that I’m seeing here. I’ll make a note to go after the lunch rush so somebody might have a chance to talk with me. It might not be to everybody’s taste, but this is an absolutely fascinating discovery. Barbecue lovers, you need to get out here and dig into this region and see what I’m talking about! 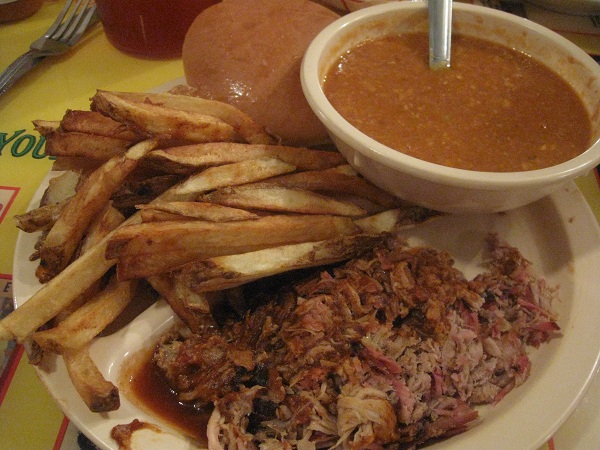 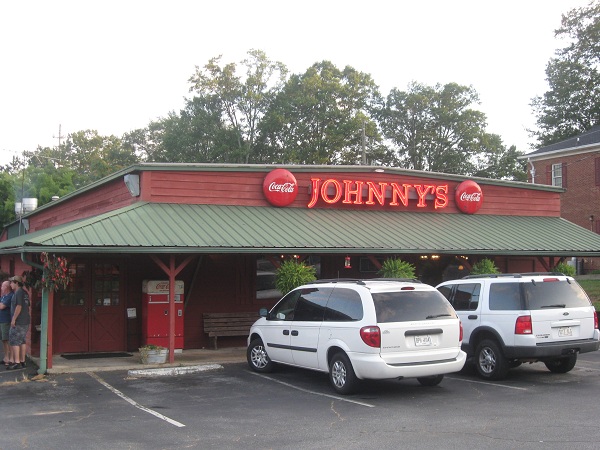 A couple of Saturdays ago, Marie’s mother came to town and we had a pretty good time and enjoyed some good meals, although I think her favorite of the dinners out must have been our lunchtime trip to Vingenzo’s in Woodstock. That really is some unbelievably amazing pizza. She doesn’t actually care for barbecue, madly, and so, for supper, I tried to come up with someplace that we hadn’t covered in the blog before that I knew also offered pretty good steaks and burgers. David had taken Neal and me to Johnny’s several years ago, and while I didn’t remember the details, I remembered that it was a big Saturday night family dinner place, so I asked whether we could meet at David’s place and ride over there.

If you’ve eaten at Wallace recently, then Johnny’s will give you a case of déjà vu. It’s not merely the similar style of cooking the pork; the interior and the design is very familiar. The great big room with rustic 1930s bric-a-brac on the walls feels very comfortably similar, like you’ve been here before.

I was pretty taken with the food at Johnny’s, though I would have preferred to try the meat dry. The sauce is gently tangy and not very sweet, but the mustard sauce on the table is among the hottest barbecue sauces that I have tried recently. It’s a menace, and makes a great dip for the “floppy” fries. Marie had the ribs and enjoyed them very much, her mother had a burger with some really good baked beans that she liked more than the main course, and David had a steak that didn’t set his taste buds alight, but he said it was pretty good.

Well, now the next question – as soon as I’ve made my way to Hudson, anyhow – is how many more restaurants in the area serve barbecue in this style? Four big established places in such a small radius definitely makes a trend, but I wonder how widespread it is? More research, as ever, is needed!