Our friend Chris in Jacksonville has lived all over the place, and he’s got relations and aunts (he pronounces it “onts,” magically) and kinfolk all over, so he’s a pretty reliable source for getting ideas about where a fellow should visit. When Marie and I let our friends know about the honeymoon road trip, Chris was among the first people to make a suggestion. Since we were going to be visiting Philadelphia to see Marie’s aunt and uncle, we needed to swing by the Little Hut Sandwich Shop in Ridley Park, which is not far from where they live. Apparently, Chris is under strict orders to always bring his grandmother a big cheesesteak from this little takeaway counter whenever he visits.

Boy, you want to see people fight? City of Brotherly Love my eye, you just watch what happens when a newbie wanting to visit Philadelphia asks where he should go to get an “authentic” Philly cheesesteak. I think fans of one shop literally drive across town and beat people up for what was said on the internet about somebody else’s. I once defended Roy’s Cheesesteaks here in the ‘burbs of Atlanta as being as authentic as what you can get in Philadelphia, as Roy is actually from Cherry Hill. One guy told me “he isn’t there any more, is he?” and another said that Cherry Hill’s not Philadelphia. I took a lesson from internet fights that I once spent far too long fighting, and withdrew after the first round. 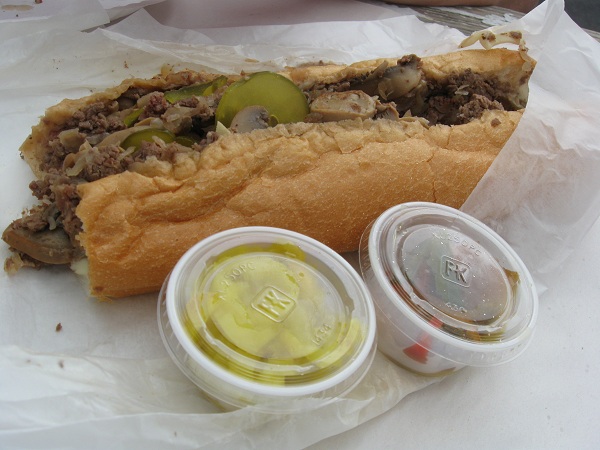 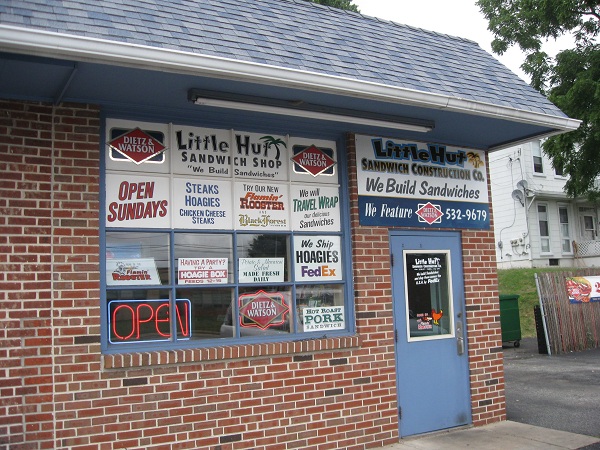 Oh, we just had a ball getting to this place. See, I printed maps of each little area that we would visit and, naively, assumed that you could just take I-95 down from New York into Philly. The Jersey Turnpike isn’t really I-95, even though it’s the same road. To continue on I-95, you actually have to detour onto one of a number of perimeter highways. Thankfully, Marie had to foresight to buy an atlas just in case, and pointed out that if we continued south on the Turnpike without exiting, then we would end up in Wilmington without seeing Philly at all. This remarkably confusing problem is detailed at Wikipedia across several pages; in short, this is one of the only interstates in the country that has two separate legs, and requires drivers to use other highways to get from one to the other.

Detouring via, I think, I-195 and I-295 around Trenton just to stay on the road we wanted was actually the second weird disappointment of the day. After our wonderful trip to Boston, we drove as far as someplace in Connecticut called Cromwell for the night. We had slept pretty decently at a Super 8 and looked around for some breakfast. I can’t remember where we ended up and I’m hesitant to name it for fear of shaming the wrong place, but it was a diner and Marie wanted pie for breakfast and they served her a piece with mold on it. Seriously.

The morning was spent driving through northeastern sprawl. The highway skirted around New Haven for the most part, and then through the disagreeably ugly Bridgeport. In time, I-95 carried us through the Bronx and Queens (cue the customary verse of “Dose Were Da Days”) and across the George Washington Bridge, eventually putting us onto the Jersey Turnpike. If you remember July 2009, you might recall that the feds came down on a half-dozen or more elected officials in New Jersey for corruption. I had a little frisson of excitement hearing about this on the news as we continued, but happily, we made it out of the state before the FBI closed the borders or anything to stop any of these crooks from leaving town.

We got to Philly a little after one. The northeastern neighborhoods are ugly as sin, but the downtown is breathtaking, the bridges are gorgeous and I love how all the ballparks and arenas are in one area. We got a glimpse of the Spectrum, which was demolished about a month later. We made our way to Ridley Park and found Little Hut very easily. The teeny place only does carry-out orders, though they do have a picnic table outside.

After enjoying some great conversation with the couple who were working the counter and learning about their shop, Marie and I split a giant mushroom cheesesteak and it was just amazingly yummy. The bread was soft and chewy, and the meat was seasoned just right. Neither of us had a cheesesteak that good before, and, other than Roy’s, haven’t had one that good since, although Woody’s comes pretty close. We had a bag of Herr’s brand chips and washed it down with a Hank’s orange cream soda. Amazingly, Marie’s aunt and uncle live only about two miles from Little Hut but haven’t got around to trying them. We made sure to let ’em know where to go next time they get a hankerin’ for a steak sandwich like this.