Next week sometime, I’ll get around to telling you about why I ended up here, instead of at Bocado like I intended on this past Friday. Briefly, I found myself suddenly desiring a nice, comforting plate of chopped barbecue pork instead of the sandwich that I had been thinking about all week. There are a pile of barbecue joints around Atlanta on my to-do list, but the one that spoke to me the most was this old place way out Georgia 120, long past the point the road changes its name from Whitlock to Dallas Highway. From the Marietta Square, it’s about twenty minutes’ drive. I had only been to Briar Patch once before; when I had the Geocities barbecue page up, a reader in the area recommended that I come out this way and give the place a try.

It had been a really long time since I drove out this way at all – long enough to miss an unfortunate change. The El Pollo Loco where we used to eat is now an IHOP. That California-based chain made a big production out of moving into the Atlanta market about five years ago, but it kind of did a half-assed job, if you ask me. Not bad burritos, mind. They’ve a few stores left, I believe.

Anyway, the road takes you past Cheatam Hill Cemetery, where my father was laid to rest in his amazing, see-it-to-believe-it plain pine box, past the IHOP, past the gigantic, upscale Avenue at West Cobb, sister development to the nice shopping center between Marietta and Roswell on the same road, through a charming community called Lost Mountain, and to the Paulding County town of Hiram. Weirdly, I realized too late that I was out in this general direction just four days previously. My son’s middle school had a band competition at McEachern High and this place is only seven miles from that school. Let’s do a better job watching that odometer with gas prices like these, okay? 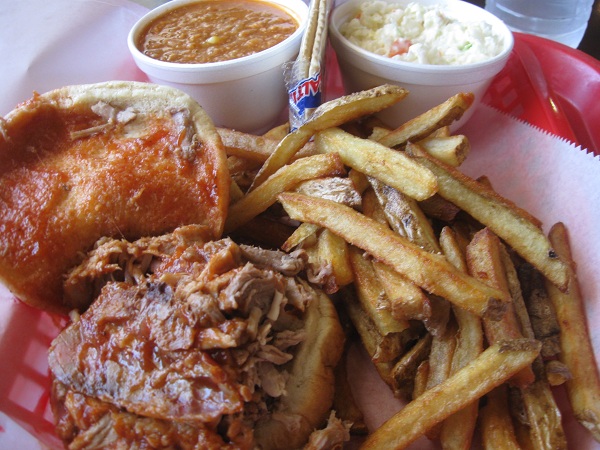 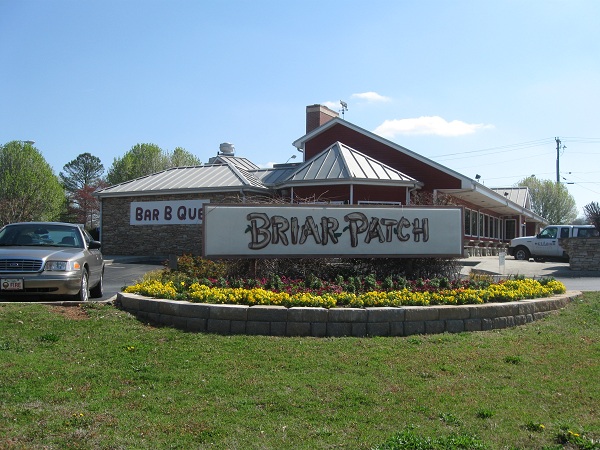 Not visible in the above photo: Seven hundred trillion ragweed pollen particles. Per hundred. It was a rough day.

This place is a big and definitely popular destination in the area. I got there at twenty past eleven and parking was already at a premium. Briar Patch employs a huge staff to keep things moving efficiently. The service line gets you to a couple of registers underneath three big video screens that show off the menu. It’s a big, full service restaurant with burgers and steaks as well as hickory-smoked pork, beef and chicken. I went with a “little” pork sandwich basket, which comes with fries and slaw, and asked for an extra cup of stew.

Weirdly, and I’m not sure what to make of this, they offer bottled water for free, but charge ninety-five cents for a cup of ice. I’m pretty sure that I’ve never run into this before.

I made the mistake (again!) of not asking for my sauce on the side. The sandwich, nicely priced at $6 with slaw and fries, comes drowned in their red tomato-based sauce. The chopped pork was very tasty, but I think that the amount of sauce really overwhelmed the meat. I was able to fork out a couple of nibbles that tasted much better on their own, or dipped in a really good spicy hot mustard sauce. I got a little cup of this for my fries. My doctor had, just an hour earlier, told me to lay off the spicy food for a week while my allergy-devastated throat heals, but the mustard sauce is just so good that I couldn’t resist a few contraband bites.

The slaw was really nice and creamy. I recall, from my first visit many years ago, not really enjoying it, but it was a pleasant surprise this time out. The stew was very mild, thick and chewy, and quite honestly the highlight of the meal. It tastes terrific, and it felt so good going down my gullet. I will say that the portions are really reasonable, but will probably feel small to people used to overeating with a plate of barbecue like I used to do. Since I’m trying to whittle down my portion sizes, I was pleased, but I can imagine some eaters might want to pay the extra dollar for a large sandwich.

I brought some Gregory McDonald to read, but was distracted a little by the decor. Apart from the mounted deer and game heads throughout the store, the top tier of the walls show off some painted artwork depicting Confederate soldiers fighting in Paulding County. (A drive from Marietta will take guests through a tiny sliver of Kennesaw Mountain National Battlefield Park.) On the wall above the exit door, there’s a big depiction of a not-entirely Disney-styled Br’er Fox threatening Br’er Rabbit with a trip to the briar patch.

I’ve lived in Georgia all my life and consider Joel Chandler Harris a whimsical part of our common folklore, but was surprised to learn that neither of my kids has any idea who the heck Uncle Remus was. I know the tale in this painting from my third grade teacher reading it to us. I suppose that you can’t do that in school any longer.