Every so often, I get a reminder that, for every new restaurant that stays on top of social media and Google alerts about their place, there are many more that have no real interest in doing that sort of thing. Take, for example, Fred’s Bar-B-Que House in Lithia Springs. Despite logging several hundred guests a day, and a welcome and thanks to every one of you, this very blog had some disagreeable misinformation posted on it a little more than five months ago, and in all that time, nobody, not the business owner nor any of his legion of patrons, mentioned it to me.

Probably back in 2001, I visited a restaurant one Saturday evening not far from McCollum Air Field called the Kennesaw Bar-B-Que House, and logged it on my old Geocities barbecue page. Some time later, it closed, and I mentioned its passing in a June chapter here that listed all those older restaurants that had closed since I first wrote about them.

A couple of months went by, and I started cleaning up Urbanspoon’s listings of barbecue places in Georgia and Alabama. As I’ve mentioned in some earlier chapters, this wonderful, useful site does have many errors, ranging from businesses that were closed before there ever was an Urbanspoon, to miscategorized places, like wing joints erroneously tagged as serving barbecue. So I was looking through the Atlanta “B” heading and found a place called simply Bar-B-Que House in Lithia Springs, and, like the one in Kennesaw, it was said to serve something called Yellow Jacket Hot Dogs. I guessed that either that business moved or this was another location. Either way, their web site was expired, but I added it to my to-do list, and, a couple of Fridays ago, drove out to enjoy some of the best chopped pork anywhere around Atlanta, in an unassuming little place that nobody online talks about. I can’t help but find this curious, as it’s more evidence that, the further you get from the city center, the less important the internet is to your business’s success. There was a huge mob of customers and guests that any trendy urban place would kill for, but not one person in this crowd apparently had any incentive to let Urbanspoon know that the name of the restaurant should be Fred’s Bar-B-Que House. 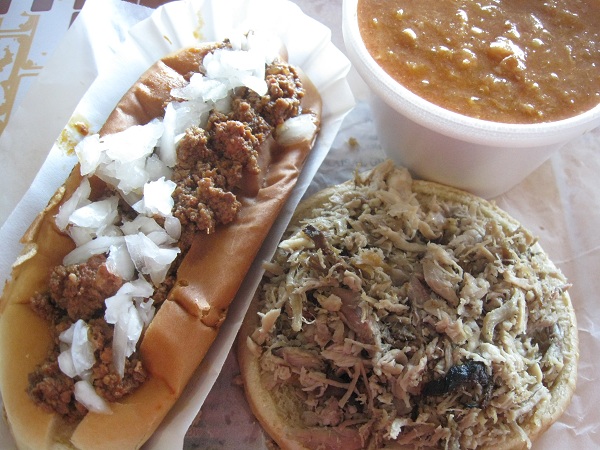 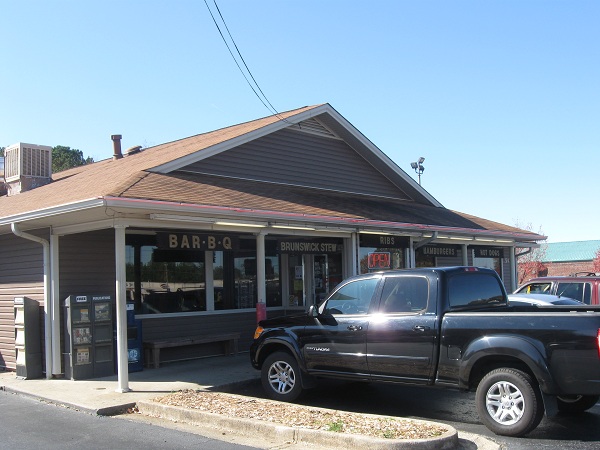 So I was quite mistaken in simply listing the Kennesaw location as closed and having no follow-up. I got only the briefest few words with Fred, who was managing the front register and window amid an increasing tidal wave of hungry customers, but he confirmed that place had been their second location, and it closed in April of 2004. The store in Lithia Springs has been doing roaring business for twenty-five years now, with hardly a mention online. This is one of those restaurants that I’d like to see turn around on that front. It really is quite interesting and very tasty. Well, the hot dog wasn’t.

Even the only sour note of my meal was nevertheless fun in a historical sense, however. The Yellow Jacket Dog – a mediocre boiled dog served with ketchup, mustard, onions and dry chili on a toasted bun – is a holdover from the dogs served from the 1950s through the 1970s at the long-closed Yellow Jacket Drive-In, which had been at the intersection of North and Hemphill two generations of Georgia Tech students ago. We’ll set aside partisan college loyalties in favor of good taste, noting that Athens has seen more than its share of below-average restaurants with the word “bulldog” stuck the name somewhere, and just say that infinitely superior dogs are available from many, many other places in town. I suppose, though, that plenty of older Tech alumni can be excused for their nostalgia in wanting to experience these old favorites again, and I am glad that the beloved old recipe has a home on Thornton Road for them. Businesses with a sense of history are always a good thing.

But honestly, I have to wonder who has time for more than just two or three bites of these unhappy dogs to confirm their awfulness when this excellent pork is available. This is genuinely terrific stuff, tender and moist and smoky and not needing any sauce to impress. The house sauce is a light brown, mildly sweet tomato-vinegar blend and it is also really good. This interstate exit is home to two really fantastic restaurants. South of I-20, you’ve got Turner’s – slash – Beaver Creek, with its pulled pork and glistening orange mustard sauce, and north of it, you have this place, with chopped pork and sweet brown tomato sauce. What the two have in common is an amazing success among the locals. Fred’s was nearly packed by 11.45, with a short wait at the window and limited chances to chat about things in the “lobby” while you wait for your number to be called. After twelve, the line snakes into the dining areas, and the big parking lot is darn near full.

I was reminded how, a couple of weeks previously, David and I enjoyed an almost solitary lunch at downtown’s One Eared Stag, nobody there but ourselves despite every blogger in the city yammering at full volume about it (and with good reason; it is amazing), and here’s this place, the only reason the line isn’t out the door is because for some weird reason it threads through the dining room. You get outside the perimeter, the definition of success is a little different. Might be, it’s a little more honest.