It felt like an unusually long shoot while it was here, but most of the location work for the film Anchorman 2 was done here in Atlanta between March and May, with our city apparently filling in for both 1970s San Diego and New York. Back in March, always thinking about what might make an interesting story, I read that a restaurant called Olympic Flame on Marietta Street had been transformed, via that Hollywood magic!, into a fried chicken restaurant owned by David Koechner’s character, Champ Kind. I rushed over with my camera as soon as I could, but was too late. The film crews had used the location for one day and promptly removed the fake signage. Other bloggers got there with more speed than me, and links to them can be found below. Soon after, production was seen at The Silver Skillet on 14th Street. I don’t know whether any restaurant in this town has served as a location as often as the Skillet has.

But back to Olympic Flame. Many people – including me! – erroneously believed that this restaurant opened amid the hoopla of the ’96 Games. This is untrue. It opened in 1970 and is actually the surviving store of what was once a small chain. In 1975, there were two other Olympic Flames in town: one was at 1591 Howell Mill Road (today part of the property on which Flip Burger Boutique sits), and the other was at 2753 Stewart Avenue (now Metropolitan Parkway [US-41] and home to a Chinese restaurant). These closed by the early 1980s, leaving this place quietly doing its business for decades without much attention from food and restaurant hobbyists.

Independent for so many years, Olympic Flame is owned by Maria Costopoulos and her son Pete. Maria opened the business with her late husband George, who passed away last year. For a short while, the family also ran a pair of diners in the far northern suburbs, Gold Medal and the Lanier Diner. Both closed in 2010, but the Olympic Flame is still serving up classic, basic fast food burgers. 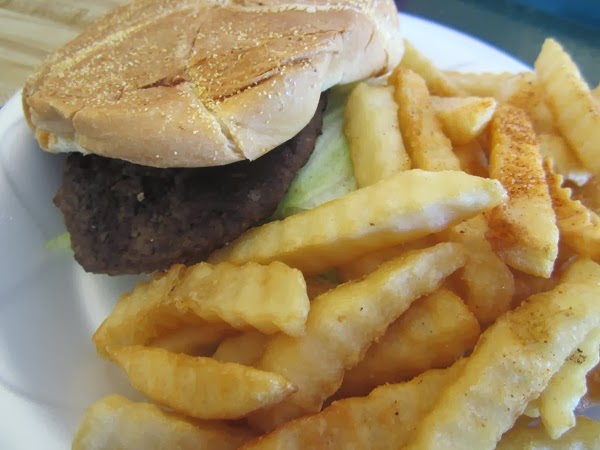 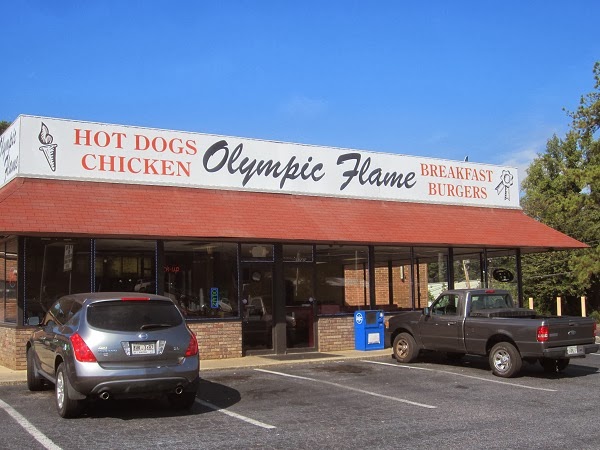 Open for breakfast and lunch, and apparently doing the good majority of its business before the sun rises, the Olympic Flame has a wonderful, trapped-in-time 1970s look and taste. I’m not going to kid you into thinking that a burger, fries and Coke here are anything other than fast food, and, compared to the national chains, expensive fast food coming in at over $8 for the basics, but it’s really neat to visit a place from the days just as those national chains became omnipresent which has not redesigned and rebuilt. I’m curious whether the film producers used the interiors as well as the outside of this place, because this is truly a 1970s relic.

Another neat thing that I learned – too late to sample – is that Olympic Flame is allegedly the one, true home of Yellow Jacket Hot Dogs. Many old-timers recall that, from the 1950s into the 1970s, Atlanta’s world-famous Varsity had a competitor on the other side of the interstate. Yellow Jacket’s dogs were made with a similar dry chili and served on a toasted bun, and there were many imitators back in the Eisenhower era, including a boldly-named Blue Jacket Drive In that was located on the present-day site of the West End MARTA station. When Yellow Jacket closed, the actual chili recipe was entrusted to George Costopoulos. A number of older places in Atlanta’s western and northwestern suburbs serve similar chili on their dogs, including Fred’s Bar-B-Q House, Merle’s Bar-B-Q, and the Martin’s chain, and some of them call their dogs “yellow jackets,” but it’s possible that if you want the genuine article, you may have to carry your torch to Marietta Street.

Ouch. I’m sorry, readers, that was terrible of me…

Anchorman 2 is in theaters today.

See also the comment thread at this 2008 story at Chicken Fat for more about Yellow Jackets, Blue Jackets, and, believe it or not, Shrimp Boats!