Here’s a place that we’ve been intending to visit for ages now, and not necessarily because of the food. In fact, the restaurant has changed owners since I first thought about stopping in for a meal, and, slightly, changed names. Many, many different restaurants (and, apparently, a car dealership!) have found a home in the old Oogleblook building on Buford Highway. Sensational Subs – a very nearly defunct Atlanta chain with, apparently, only one location remaining – had a store here in the 1990s. It has been called Café 101 since at least 2005, but there have been at least three tenants in that time, with three different menus. It’s been a Chinese restaurant since late 2007. In August, the restaurant was quietly renamed 1968 at Café 101, after the year that Chef Kao began cooking in Taiwan. His partner, Chef Yang, specializes in northern Chinese dishes.

At first glance, the menu appears to be one of those omnipresent suburban Golden-This-Happy-That palaces, with better than a hundred different entrees, divided into sections like pork, seafood, and vegetarian. Closer inspection, however, reveals quite a few uncommon dishes and many with which our family was unfamiliar. Some of them, like offal soup, and something called “lamb scorpion,” must be ordered in advance. The result is a mix of American-friendly dishes and more traditional ones, and that mix reflects what our family ordered. 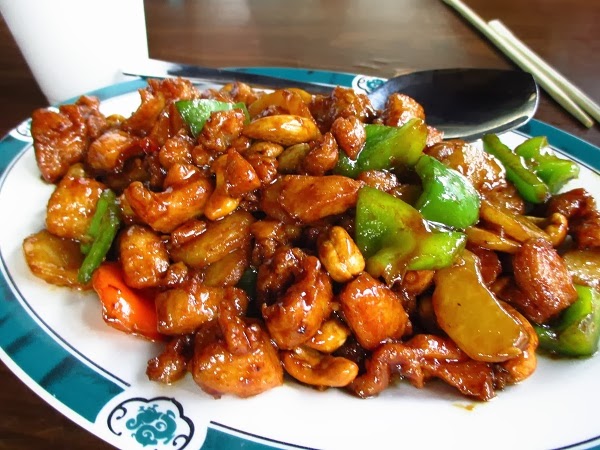 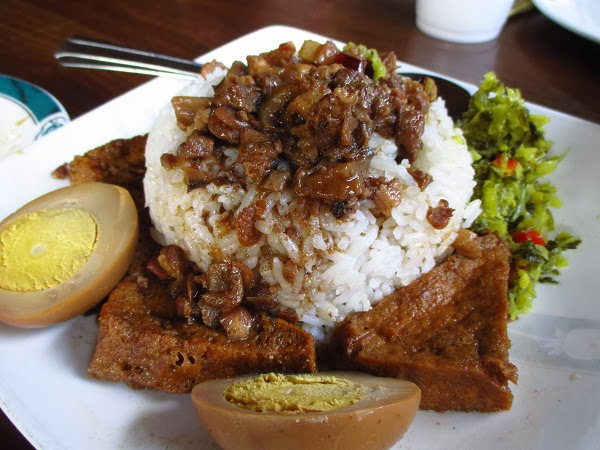 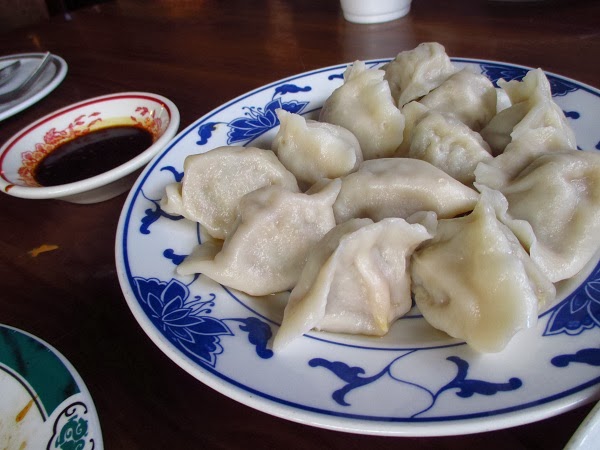 We shared three dishes: chicken with cashews, braised ground pork over rice, and some dumplings with pork and chives meatballs. Marie was most pleased with the meal – she really has grown to love Chinese-style dumplings since we first tried them at Chef Liu a couple of years ago – and the girlchild and I thought that everything was pretty good, although not really outstanding. I wouldn’t object to another visit, but if I were really in the mood for Chinese cuisine, I would rather revisit Gu’s Bistro.

That said, I also would not mind returning here with friends and watching them marvel at the interior of the place like we did. 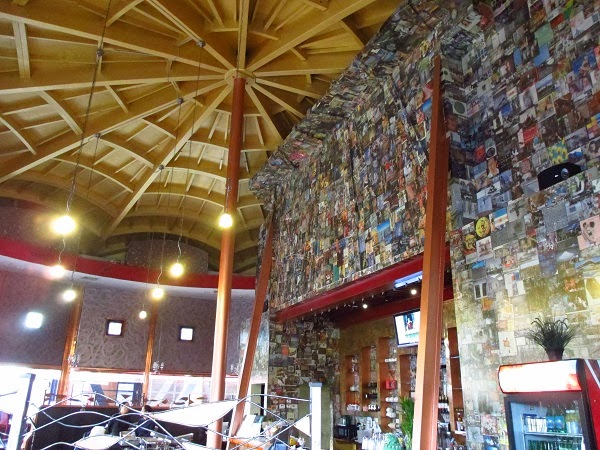 Sometime after the closure of Oogleblook, one of the subsequent owners (probably in the 1980s) gave the bar and counter wall an amazing job of decoration. All of those colors on the wall, reaching up two stories, are fashion magazine ads and covers. The ceiling is completely gorgeous. This really is a unique building. 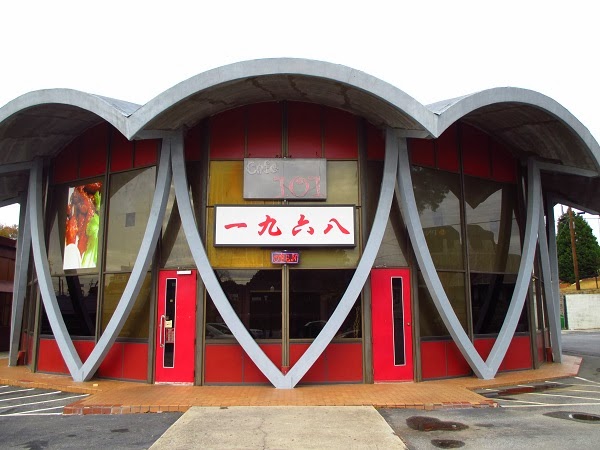 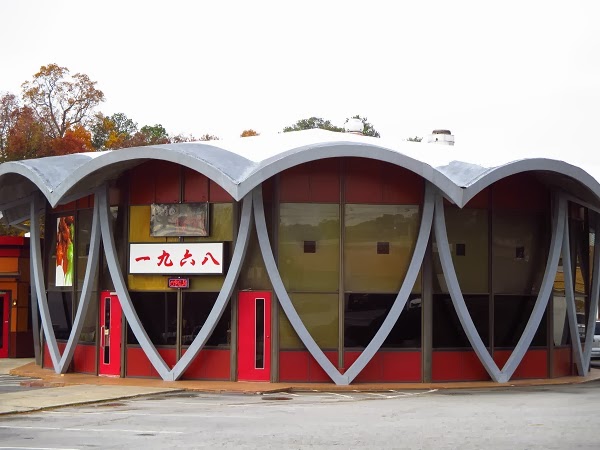 Oogleblook was owned by Morrison’s Cafeteria. It was a “futuristic” sister restaurant, set in the far-flung time of The Jetsons. According to one anonymous reply at Tomorrow’s News Today – Atlanta, burgers would travel down long chutes to guests. It was all very space-age and silly, and apparently closed by 1974. (This means, of course, that if I did have a time machine, then one of my first stops would be sometime in, say, 1972, so that I could visit this place, and the Shrimp Boats two doors down that’s been home to Monterrey for about forty years.) 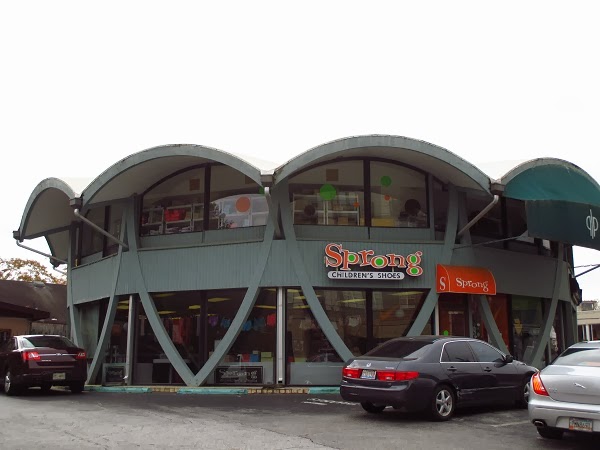 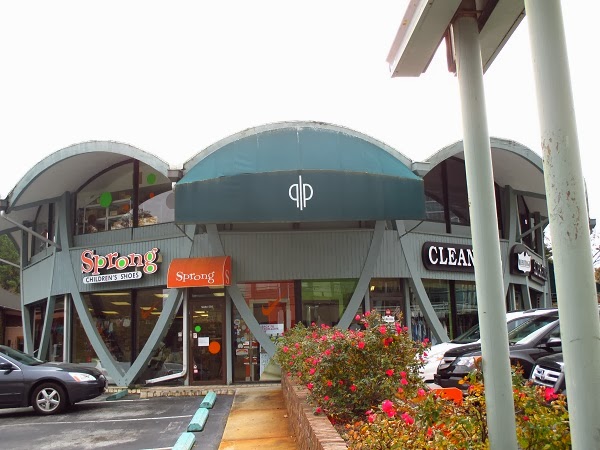 Atlanta has a couple of other big, circular, flying saucer-shaped buildings, including the one on Monroe near Cheshire Bridge that’s visible from I-85 and which will soon be home to a restaurant called Cirque, but the other former Oogleblook building in town is this one on Pharr Road. It’s also been home to several different businesses over the years, including Deka Athletics. These days, it’s a kids’ shoe store called Sprong on one side and a dry cleaner called Heritage on the other.

I haven’t found reference to any other Oogleblook buildings other than these, in any other cities besides Atlanta. If you have any other information or photos about Oogleblook, or an old menu(!), please let us know; we would love to hear from you.

If you’re only reading these chapters, then you are missing part of the story! We have a fantastic Facebook page, where you’ll be able to follow along with much more than just links to chapters here, but additional information about our favorite places, including PR announcements, links when our friends-in-blogging visit them, and other follow-up news about the places we’ve been when we can find it. Give us a like, make sure that you set it up to receive announcements, and tell your friends to come see us!