For my latest sampling of a brewery, I picked a small selection from Bell’s, the Michigan-based brewery that reignited my interest in craft beer. Between, say, 2003 and 2012, I’d have a pint of Guinness every month or so, or maybe a bottle of Samuel Smith’s Oatmeal Stout, but I really just didn’t have the interest in beer that I once had, and I think that’s reflected in earlier posts in this blog. Then we went to Kickbacks Gastropub in Jacksonville and, among the nearly seven hundred beers available – deciding what you want to drink here can take a little while – I saw Bell’s Cherry Stout. That caught my attention. I’d never heard of a cherry stout before.

That was January of this year. I’m still waiting for a second glass.

At the time of writing, Bell’s Cherry Stout has not returned to the southeast. I have phoned and I have tweeted; the regional distributor – Bell’s, which started in 1985, is sold in nineteen states – has not received any of this wonderful beer. But that’s all right. The brewery has quite a few other flavors and varieties available, and many of them are also very good. One was not. Not at all. But with – good grief! – more than fifty different year-round, seasonal, and specialty beers out there, it’s okay if one of them didn’t satisfy. Plenty of others did.

About half of Bell’s portfolio is produced in extremely limited quantities at long intervals from each other, and probably not really accessible to those of us so far away from their home base in Kalamazoo. If I ever do make it up to that city, I will certainly plan to visit their Eccentric Café, which opened in 1993. The Bell’s General Store, located next door, is – if I read this right – the only place to purchase some of their beers, such as the Bourbon Barrel Aged Batch 9000 Ale, which are only available in a 750 mL bottle for sale there. Apparently, once upon a time, Bell’s offered an oatmeal stout. Since Samuel Smith’s Oatmeal Stout had been my favorite beer before Bell’s swooped in with their cherry, I sure would love the chance to try that one day.

As for me, as always, I buy beer locally at Ale Yeah! in Roswell, who sent me home with the seven bottles pictured below. I also tried one other in the last month. 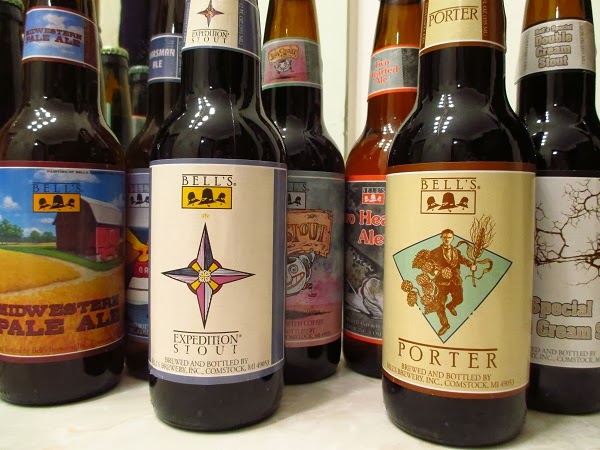 Best Brown Ale (seasonal; available only in fall): I had a bottle of this on a date night with Marie last month at the Landmark Midtown Cinema. Nice, medium body with a strong chocolate flavor. Not quite as complex a mix of flavors as I enjoyed with Wild Heaven’s Ode to Mercy Imperial Brown Ale, it’s nevertheless very drinkable and dry.

Expedition Stout (specialty; available only in winter): So this is a Russian Imperial Stout. It has a fairly high-for-me 10.50% ABV and is really thick. Quite wonderful throughout, it is really malty, dark, chocolaty, smoky, and sweet. I detected the flavors of caramel and toffee hanging around in this really complex and heavy brew. Very enjoyable; I would love to have more of this. I’d love to just smell more of this; it has such a vibrant mix of chocolates and sweets that I was smiling before I tasted it.

Java Stout (specialty; available only “winter seasonal”): This has a much stronger coffee taste than any other coffee stout that I’ve tried, and as a result, I was not really all that keen on this. I don’t know that the balance was quite right for me; the coffee was overpowering the hints of cocoa and malts.

Midwestern Pale Ale (available year-round): This is really smooth and with an odd mix of fruit flavors. I think that with American pale ales, you tend to taste a general “citrus” flavor without nailing anything down, but I swear there’s lime in this. It’s hoppy, but not excessively so, and really drinkable. I’m not a huge fan, but this is a perfectly fine, light-bodied, mild, sweet, fruity beer. Here’s an odd thought: The Java Stout compared pretty poorly to Highland Brewing’s more balanced Black Mocha Stout, but Bell’s American pale ale leaves Highland’s completely in the dust.

Oarsman Ale (available year-round): Oh, heavens. One of my brother’s co-workers at Ale Yeah! described this to me as “an introduction to sour beers.” I wish to never meet another. This is a weissbier, or wheat ale, and it is so awfully tart that I couldn’t finish a bottle. By leagues, the very worst of all the beers that I have sampled over the course of the last four months.

Porter (available year-round): I like the simplicity of the name, just Bell’s Porter. I absolutely love the beer. It’s really a perfect and smooth porter that tastes terrific and has a gentle, tingling aftertaste. I will definitely have this again.

Special Double Cream Stout (specialty; available only in winter): Completely awesome. It’s really smooth and creamy and I just loved this to pieces. I tasted the coffee in this, but it did not overpower the other flavors like the Java Stout, so this mix was just right. It’s not particularly thick like the Expedition Stout, by the way. It’s creamy, certainly, but more like 2% than whole, if you take my meaning. Absent any of the darn cherry, I’ll take a six-pack of this.

Two Hearted Ale (available year-round): An unbelievably hoppy India pale ale. That’s been the biggest take-away from these recent experiments: I don’t really care for IPAs. “Hopheads” will probably love this stuff, but it is too hoppy for me.

Before I forget, I wanted to say thanks again to Kickbacks in Jacksonville. I rang them shortly before our most recent trip to Florida (we’ll tell you about that in a few weeks), hoping against hope they’d have some Bell’s Cherry Stout. The fellow who answered could have just said no, and to try back later, but he took a couple of minutes encouraging me to check their constantly-updated listings on Facebook, and to download their mobile ap. Since Kickbacks is known throughout the southeast as one of the very best of all beer bars, and one with an inventory that changes every day, they have done a really terrific job making sure that their customers can know in advance whether the beer that they want will be among the six or seven hundred available at any time. What a great place.