Earlier this month, Marie and I were invited to visit Osteria Cibo Rustico, a new restaurant in the Toco Hill shopping center on North Druid Hills Road. It opened in November in the space previously occupied by Mirko Pasta. It’s a new concept from the company that runs some well-known Atlanta restaurants like The Big Ketch and Tin Lizzy, but close-ish enough to what Mirko had been offering that they could, after a very short downtime, reopen with many of the same staffers in place, and count on a very loyal customer base to come back and give them a try. Marie and I were quite impressed to see so many people visiting on a Wednesday evening; the place was nearly full and with a pair of large parties. It says great things about a staff to see so many of their previous incarnation’s customers willing to come sample the new product.

Osteria Cibo Rustico is another local take on an Italian-inspired neighborhood eatery. It’s a much simpler and more sensible take on Italian-inspired cooking than the big suburban sauce palaces. They use no butter in their kitchen and very little salt, and the meals are designed to be shared with friends and families at the table, and not sent home in a stack of gigantic boxes, basically. It’s Italian food done right, in other words. 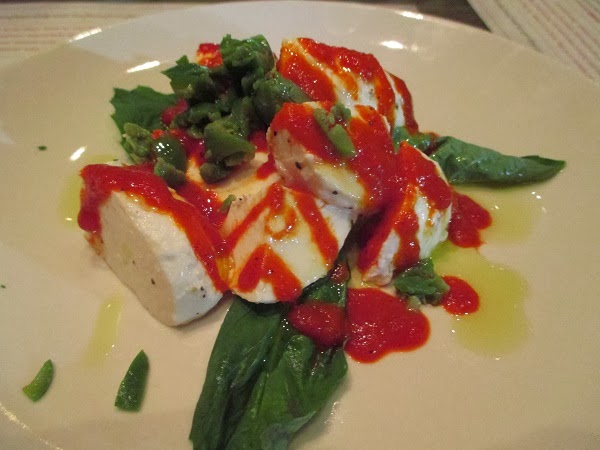 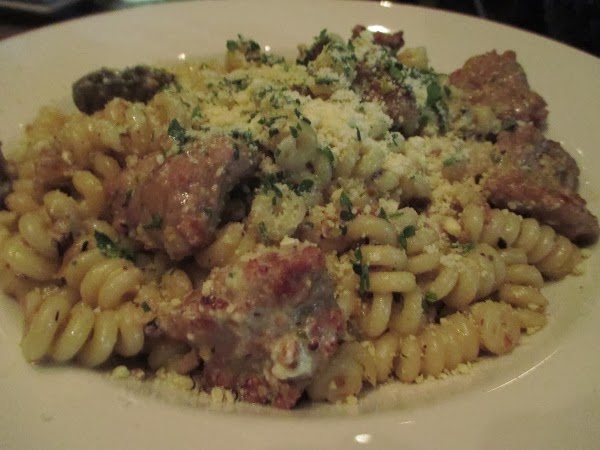 We started with an order of mozzarella. They have four varieties available, and we selected the Caprese Napoli, which is served with roasted red pepper pesto and olives with basil. This was pretty good, although we honestly prefer the mozzarella at Timone’s (about which, more in a few days) over this. But that’s okay, because the main courses were very, very good.

The menu is not worded very well at all, honestly, but we fortunately had a terrific server, Ashley, who made good sense of it. The idea at Osteria Cibo Rustico is for each guest to order either a pasta dish or an entrée, and then get perhaps one sharing side for every two people. I think that it suffers from having slightly too many very similar choices, but a little navigation and patience will result in a good meal. It might be best to plan to describe what your tastes are, and let your server make suggestions.

Marie selected the Fusilli from the pasta menu. This comes with fennel sausage, mushrooms, toasted garlic and onions, and pistachios, but hers came with grilled asparagus as well. She also added some ricotta cheese. I did the create-an-entrée trick, and had jumbo shrimp with a roasted red pepper cream sauce and grilled onions over mashed potatoes. We thought that both were very good and were really pleased with our selections, but Marie went wild over how well the sauce and the potatoes went together, and so we switched plates so that she could have the meal that she enjoyed more. We picked the grilled green beans to share. This were very good, but needed a bit of salt for my taste. 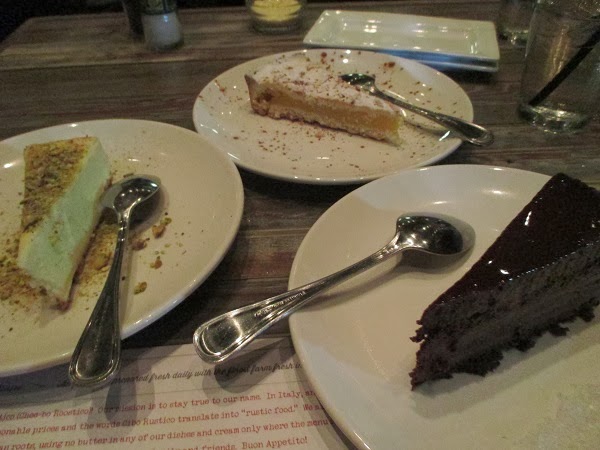 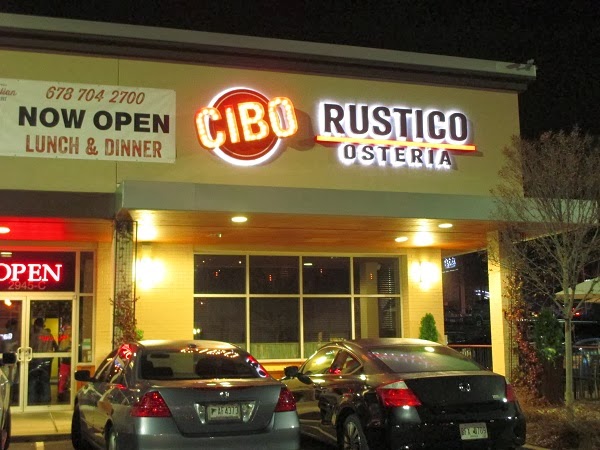 They brought out three slices of cakes for us to sample for dessert. The chocolate cake was fine for Marie’s tastes, but richer than I like it. You can’t make it out in the photo, but that comes with a little line of sea salt on the plate, which is a terrific touch. The ricotta cheesecake has pistachios sprinkled over and around it and was really good, but best of all is the dessert that everybody here loves: Grandma cake. Torta della Nonna, a lemon cake, was popularized by TV personality Mario Batali in the mid-2000s. Osteria Cibo Rustico’s version is terrific. We only had a couple of bites of each slice to confirm they’re very good, but we devoured every crumb of the Grandma cake.

Overall, this was a very satisfying experience. Entrees run a little under $20 apiece and they have a very good wine list. It’s not a bad idea at all for a group to assemble and pass around some sharing plates. Eat well, and let us know what you thought!