One Friday last summer, I drove through Toccoa on a food-packed road trip through northeast Georgia to Clemson and back, and spotted a terrific old sign for a place called Bell’s. I photographed the sign for posterity and readers let me know, through comments and e-mails, what a mistake I made in not stopping for their fried chicken. Then I uncovered the existence of those two Maryland Fried stores in town and knew that I had to get back one day. As it turned out, we got to compare the two.

As mentioned in the previous chapter, Maryland Fried Chicken is a good deal better than any of its fast food competitors. Well, maybe Bojangle’s is pretty close. Seriously, there’s not a national chain that’s anywhere close to as tasty as what we sampled. I don’t want to be too disrespectful to them, as they’re really good at what they do. But what they do is not a patch on Bell’s. This is some of the best fried chicken I’ve ever had in my life. How in the world is this place such a secret? 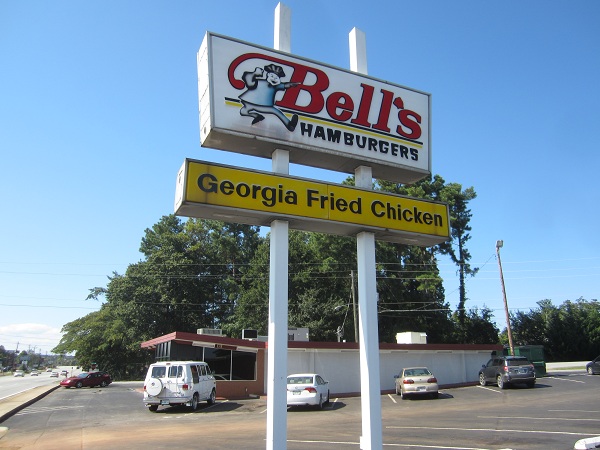 Bell’s Hamburgers has a very long and interesting history. It was started as a side project to a grocery store that was owned by “Red” Bell and his son in the 1940s. I asked whether their grocery store, remembered via black-and-white photos on the wall, was the Bell’s Food Store that can be seen here and there in north Georgia, and the lady at the register said that she did not believe that was the case. I’m aware of a Bell’s in Athens on Hawthorne – coincidentally, we started this day trip literally next door to the strip mall in Athens that is home to Bell’s when we had breakfast at Em’s Kitchen – and thought that there might be more, but the Bell’s in this story was apparently independent of the others, and had been on Big A Road just next door, where an Advance Auto Parts is today.

The restaurant opened in 1961 as Bell’s Drive-In, and was, then, a proper canopied drive-in with carhops. One of those carhops, incidentally, was Sam Camp, a saxophonist who was employed there in 1963 when he met Lamar Collins, who recruited him for his band, The Avalons. (You can read more about them over at Garage Hangover.) Even though the canopy and the carhops and indeed the name have long been abandoned, the business is still known locally as Bell’s Drive-In, and this is evident if you try Googling the place. Most online notices – 90% of them those utterly useless aggregator things – still call it “Drive-In” even though it’s been Bell’s Hamburgers for more than thirty years.

We arrived a little after 3:30 and the place was still super-busy. It’s a pretty small room, with seating for maybe forty, and they have a big diner menu full of your classic American eats like meat loaf, hamburger steak, and lots of veggie options as sides. The service was really good and the chicken, as promised, was phenomenal. Even the white meat was moist and juicy. Marie was not very taken with the butter peas, but the creamed corn was pretty fantastic, and we left very pleased, and, to be blunt, extraordinarily stuffed.

I’m going to have a hard time coming up with a place in the state that makes better fried chicken. Honestly, between the Bar-B-Q Shack down the road a mile and a bit and this place, Toccoa really is a good destination for people looking for great local food. Have an early lunch at one, go spend the day climbing Curahee Mountain, and come back for supper at the other. That sounds like an awesome day out.