For the next brewery in my small and slow “learning a little about beer” project, I wanted to try something from Asheville, a place sometimes called “Beer City” and home to something like a dozen brewpubs and breweries, and a place we are long overdue to return. I went with Highland Brewing because I remembered really enjoying their Oatmeal Porter. I first had that when I paid my first of a couple of visits to Decatur’s Brick Store Pub and I’ve had it a couple of times at other places. If I had a top five beer list, Highland Oatmeal Porter would be on it.

I asked my brother, who works at the terrific craft beer store Ale Yeah! in Roswell, to tell me a little about Highland. My brother has been to Asheville on beer tours and getaways quite a few times and has a really good opinion of the scene there. He says that Highland is somewhat comparable in size, and its impact on the smaller operations around it, to Atlanta’s popular Sweetwater Brewing. Highland was among the first breweries in the southeast to get started as craft beer became popular enough to turn from a hobby and into a real business. They started up in 1994 and at one point, they were growing so far ahead of their local capacity that they had to farm out their actual brewing and bottling operation to an outfit in Maryland to meet the demand.

In 2006, they opened their current facility on the east side of town. Over the last four years, they’ve added a Tasting Room and an outdoor stage, offering dinners and live music on weekends, as well as brewery-exclusive beers that are still at the early stages of development. Their bottles are now sold in nine southeastern states – everywhere we travel except Mississippi, basically – and they have the capacity to produce over 50,000 barrels every year. 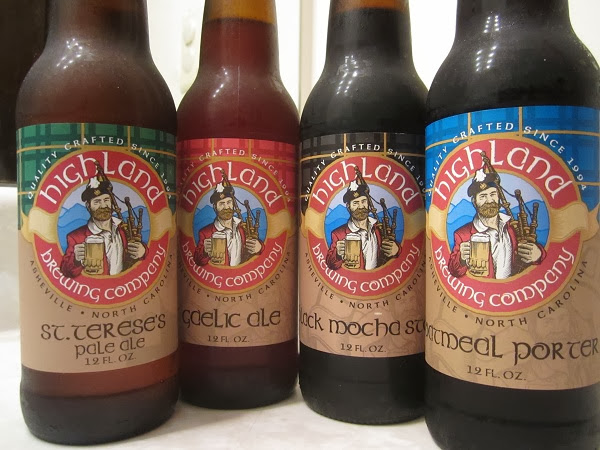 I brought home four of their beers and enjoyed them over the course of a week.

Black Mocha Stout: I liked this enormously and Marie did not. Not at all. She’s bravely begun attempting to sip a few of these things that I’m trying, but this was far too potent for her. It tastes strongly of dark chocolate and smoky malt. The coffee flavoring is quite mild in the mix, although still noticeable. I’ve yet to meet a coffee stout that ramped the coffee flavoring too high, but this might have nailed the mixture better than any other I’ve sampled. Oh, and it smelled just wonderful. It was so smoky that it really cried out for a plate of pulled pork to accompany it.

Gaelic Ale: This is an American amber ale. It’s tan and is a little fruity and has a really mild hops taste. I like the balance in this style of beer more than I do with the pale ales and IPAs that I’ve tried – see below – almost as though the mild malt flavoring has little explosive accents of hops around the edges, just enough to let you know they are there. This is just superbly drinkable at any time, and while the stouts and porters feel like they demand good food, I would happily crash back on the couch with a six-pack of Gaelic Ale to watch an afternoon of football. Or not, because I am a complete lightweight and cannot drink six beers in an afternoon.

Oatmeal Porter: As mentioned above, this is a beer that I love absolutely. Oh, it’s wonderful. It’s creamy and not too thick or chewy. It’s just a superbly balanced blend of dark malt, chocolate, and oats. I would very, very much like to go on a tour of Highland and try this fresh from the tap at their tasting room. I had never even heard of such a thing as an oatmeal porter before that trip to Brick Store, such was my ignorance, and now this might be my very favorite year-round beer.

St. Terese Pale Ale: And here’s why all good breweries develop a variety of products, because not every beer is for every drinker. This was my first taste of an American pale ale in many, many years – I know that I did once enjoy Sierra Nevada’s take when I drank a great deal more, in the mid-90s (then, Sierra Nevada was my favorite American brewery) – and either whatever taste I had for the style is gone or I just don’t care for Highland’s version. It’s just so bitter and dry, like drinking pine straw, with virtually no aftertaste. I happily concede that I’m a novice, but I was really a little confused by the taste. At least it did not linger.

Highland brews one other beer year-round, Kashmir IPA. I didn’t sample that. They also bottle at least six seasonal beers. According to their website, these include Clawhammer Oktoberfest, Cold Mountain Winter Ale, Devil’s Britches IPA, Little Hump Spring Ale, Razor Wit Belgian Wheat, and Thunderstruck Coffee Porter. Now that I have seen their full list of beers, I would love to try the two different IPAs when they’re both available, and learn to tell the differences between them.

For next month’s beer chapter, we’ll come back to the Atlanta area. Plan to learn about another local brewery with me in November!