Here’s a conundrum. How best to explain an experience where the food was really quite good, served well and in a great little environment, but still left me just glum with disappointment? This might make more sense to readers who have been following us for a while, and know that I get a huge kick out of glorious old retro signs and well-maintained old buildings from the middle of the last century. That’s what sent me up the road to Toccoa: not the promise of good food, but the promise of a great chance to take some fun pictures.

I thought that the old Maryland Fried Chicken chain was as dead in the south as it could be, but a year ago, when I did my circumnavigation of South Carolina, I was proven wrong. The sun had gone down as I drove through Florence and I did a double-take when I saw the goofy old logo. I have told myself ever since that I should have stopped; instead, I went on to the scheduled barbecue joint and didn’t enjoy it. Shame on me.

While no other food bloggers have really dug into this business and brand, the indefatigable John Pluta captured both the sign that I was hoping to see and this cubical building, at their Albany location, and kindly granted me permission to share one of his photos with you. You understand now why the aspiring photographer in me was looking forward to the trip! Click the image to visit his site, which is a terrific resource for building design.

Maryland Fried Chicken had its heyday in the 1960s and has been shrinking since the original owner, Albert Constantine, who opened the first store in Orlando in 1959, sold the business off in 1975. Whoever owns it these days has done a downright lousy job of it. They maintain what must be the single worst website of any in the entire corporate world. Seriously, have a look at this mess. Who ever heard of a restaurant whose web site has Google AdChoice commercials for their competitors running on the side? And the list of restaurants is almost comically out of date. Some of the links are dead and many of the listed locations, including the one in Macon, are closed. And Toccoa has not one, but two stores. Good grief.

Recently, the present owners of this corporation found themselves embroiled in what trademark and copyright expert Pamela Chestek calls the most complicated ownership case that she’s ever seen, involving parties who cannot even agree how to spell their own names. The franchises are given a level of control utterly unlike anything I have ever seen in the industry. What the court found in that trademark case is that in return for some T-shirts and a proprietary recipe for slaw, the local stores can sell and price whatever the heck they want. There are Maryland Fried Chicken restaurants that specialize in anything from fish to gyros to chow mein noodles. In fact, it looks like the Florence store that I saw was originally a “Shrimper Seafood” that bought into this brand to get some chicken to sell.

With this in mind, Larry Vinson owns both of the Toccoa stores, and while he’s serving up some very good food, including barbecue, I fear that using the internet to get the word out has eluded the franchises as well as the home office. So we finally cleared up a Saturday to visit Athens and then mosey on up the road for an hour to photograph the wacky old signs. I phoned the restaurant, on Currahee Street, to make sure that they would be open. The young lady gave me the bad news that on Saturday, they were only open for breakfast, but the other store’s open for lunch and dinner.

What other store? It’s not only missing from the MFC web site, there was nothing on Urbanspoon, Yelp, or Facebook, or anywhere else about another location on GA-145. I finally found an address and telephone number for it at the Stephens County Chamber of Commerce site. So we took US-29 out of Athens, through Danielsville and past the amazing Zeb’s BBQ, turned left / north on GA-145 and, less than an hour later, arrived at the new Maryland Fried Chicken, which doesn’t have any of the gorgeous old retro signage or fun that I hoped to see. It was just a nondescript building, previously home to a restaurant and soda fountain called The Crossing, with simple red letters on the roof. 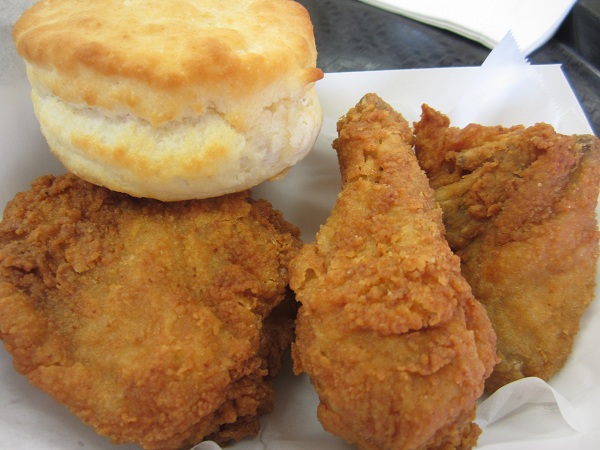 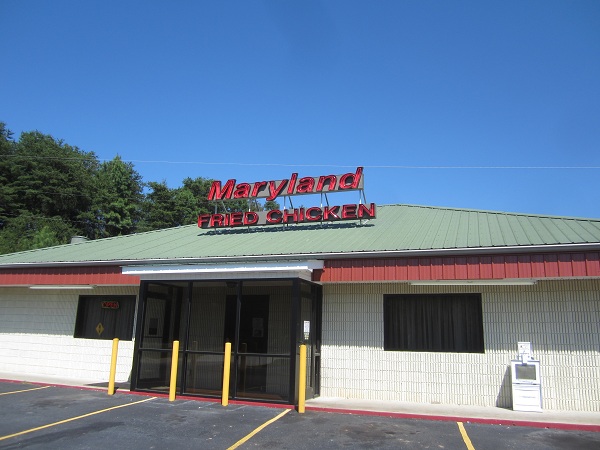 When you have a business serving food this good, I figure that you kind of want to get the word out, even to the oddballs with blogs who like silly old cartoon chickens and trademark fights. Apparently the secret to this style of chicken is that, instead of being deep-fried, it’s pan-fried in a closed container, so it gets steamed as well. This results in a breading that’s not very crispy, and moist and tender all the way through. For fast food chicken, this is a good deal better than the average.

So, okay, this is clearly the new building, but what about the other? Could I photograph the wacky old signs that I wanted to see there? What about the building itself? Looking around at some other examples of roadside architecture, I am starting to think that, for a short time, Maryland Fried Chicken had a distinctive building, a cube with three flat square panels on the front. Most of these have been repurposed or bulldozed as the chain disintegrated, though it is possible that the excellent True BBQ in West Columbia, SC made its home in an old MFC. So what was I going to find on Curahee Street? I asked the girl at the counter whether the other store had the big, distinctive sign, and whether it was in one of the old buildings? I was speaking the language of eccentric weirdoes. No hablo oddball, mister. She said her manager might know.

She was wearing a pink shirt with the silly bird logo on it. The bird logo also appears on the bright and colorful carry-out boxes. I asked whether the other location was designed like that, and if it had the old sign. “Oh, yeah, it has a sign,” she said. 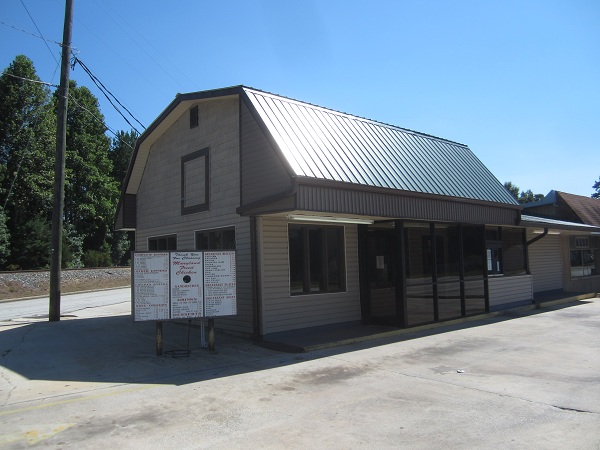 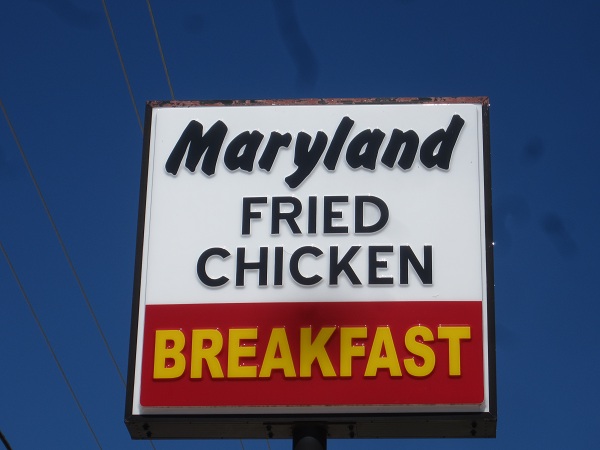 I’m not sure which is worse: (a) There’s some blasted debris somewhere in the lens of our camera and it’s screwing up some of our zoom shots and we’ll have to replace it, (b) we went out of our way to see nothing remotely special because this lady had no clue what the heck we were talking about, or (c) that side of Toccoa is like Little Memphis. I really had no idea what an ugly, impoverished, downright dangerous-looking stretch of blight and ugliness we would navigate.

So that’s the Maryland Fried Chicken story, at least in Toccoa. We came for the history first and then the food, and found a business at both the corporate and the local level completely unconcerned about history and indifferent to the modern world. Although, with a history that convoluted, who could blame them? The food at one of the Toccoa stores is certainly good, although I can’t help but wish we’d have got the chance to enjoy it in the surroundings I thought that we’d see.