Years ago, in some of the earliest chapters at this blog that mentioned barbecue around Athens, I lamented the closure of Carither’s, a very good restaurant that had been in an old red brick building on Milledge, near the old Bi-Lo and the bypass. I found it probably in 1995 and ate there off and on for the next decade. I was not the only one. The legendary ABC sportscaster Keith Jackson once called it the best he’d ever had.

Hash is often thought of as a South Carolina specialty, but it extends into northeast Georgia in many of the older restaurants in place of Brunswick stew. In Augusta, ninety miles away from Athens, it is still served over rice as it is commonly seen in the Palmetto State, but the further you get from I-20, the less common it is to see white rice. In the Athens area, and further north into the mountains, those restaurants that offer hash (and those, like Zeb’s, whose unforgettable “stew” is not at all like Brunswick and has more in common with hash than not) do so plain. It is thick and orange and served with a spoon to be slopped up onto white bread. Carithers was the first place that I ever had hash, and, even more of a novice then than now, I added it to my slowly growing knowledge base about regional cuisine.

I had hoped to feature Carithers at our blog when we got started in early 2010, but they’d closed a few years earlier. Doug Carithers, then in his mid-seventies, had retired to Sarasota, Florida. Time marched on, and then I read something remarkable in the summer. Hillary Brown, writing for Flagpole, reviewed a barbecue joint with a familiar lineage. (Here’s her story.) Unbeknownst to me, Doug Carithers had, in 2010, returned to Athens and, with Larry Scott, opened a new place, Carithers N Scott Bar-B-Q, north of town on the old Danielsville Road. It’s actually right in the little elbow where Danielsville Road and Ila Road meet, the gravel lot accessible from either side.

Between then and now, Doug retired again, his hip bothering him too much to work. Larry Scott runs the place with his wife Betty. In something of a casual way, the restaurant goes by many names. When we stopped by on our most recent visit to Athens last month, Larry told us that the restaurant is called Scott & BJ’s, which is the name on the menu, but the name on all the outside signage is simply Scott’s. 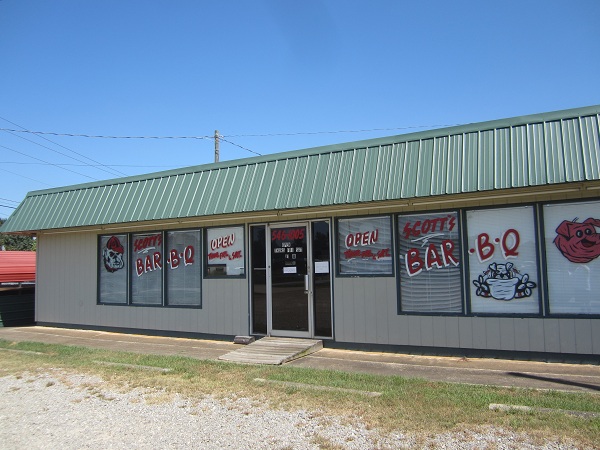 Larry Scott knows very well the value of history, even apart from the happy memories that his former partner brought to the business. The little diner-style restaurant is sparsely furnished, but on one wall, there’s a framed photo, a page from a magazine with a sidebar about the legendary Poss’ Barbecue. This place had its origins, I think, in the 1930s and a grocery called Poss’ Famous Foods. In the late 1940s, Robert Poss Jr, son of the owner and well-known in the area for playing for the Bulldogs on their 1942 Rose Bowl team, turned the business into a local legend. Apart from keeping a concessions contract at Sanford Stadium for many years, Poss’ Barbecue was one of the must-visit stops for both rival coaches and anybody who wanted the voters of Athens to support them. For many years, in addition to the “pig sandwiches” at his restaurant, Poss had a line of canned Brunswick stew and hash in grocery stores. Larry told me that he was good friends with Robert’s son Bobby, and went to school with him. Robert Poss Jr. passed in 1996, by which time the restaurant was part of history. Lots and lots of history intersects at the elbow of Danielsville and Ila Roads.

Today, the Scotts are keeping lots of old traditions alive in their quiet, wonderful little place. The chopped pork is a little bit greasy, but it goes really well with three increasingly hot variants of a dark tomato-pepper-vinegar sauce. The extra hot, served from a yellow mustard squeeze bottle, is like rocket fuel. It was amazing.

And the hash? It’s every bit as good and wonderful as what I remembered from Carithers. They just give you about a half-order as a side, and Marie had a full bowl. She didn’t finish, anticipating the meals at our next two stops, so I was happy to finish it for her. My mouth, on fire from the extra hot sauce, was the happiest it’s been in a while with this terrific hash. If you’ve never fallen in love with this dish before, this is a very good place to start a lifelong affair.

Other posts about this place…

Well, sadly, other than the Flagpole story linked above, I can’t see that any other barbecue or food bloggers have made it to Scott’s, but reading up on Poss’ Barbecue brought me to an amazing 1963 story at Sports Illustrated, written during the period that Poss Jr. managed the UGA sports concessions. Unfortunately, SI changed their site around, the link went dead, and I can’t find it anymore. Maybe you’ll have better luck…