This is Marie, contributing an article about breakfast in Athens. I’d first run across a mention of Em’s Kitchen on one of my favorite mommy blogs, the wonderfully eclectic My So-Called Mommy Life, from a post way back in the spring. Sadly, we go to Athens far less often than I’d like, and we didn’t get around to trying the place out until now. It is a breakfast and lunch place which does brunch on the weekends.

It’s built into half of a building also housing Hawthorne Drugs, and the two businesses are family affairs, both run by members of the Ullrich family, and with an emphasis on service. One of the pharmacy employees was there to get breakfast with his name tag on, and he was very sweet. The eponymous Em is Emily Ullrich, listed on the restaurant page as General Manager. She wasn’t there on the day that we visited, which is a shame. However, restaurateurs have insane enough hours without trying to do 24/7. It would have been nice to thank her, though, for thinking of putting in the wide selection of children’s books that helped keep a grumpy and undernourished (!for his second breakfast!) toddler busy. The books kept him away from the extremely tempting and colorful selection of salt and pepper shakers – there’s a different set on every table, and another display full of the kinds that are more appropriate for show than for general use. 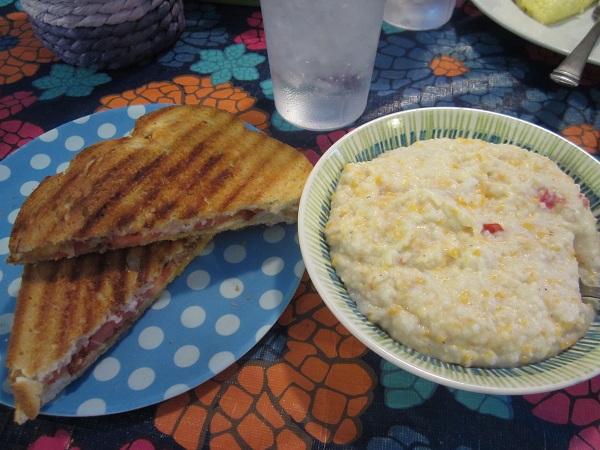 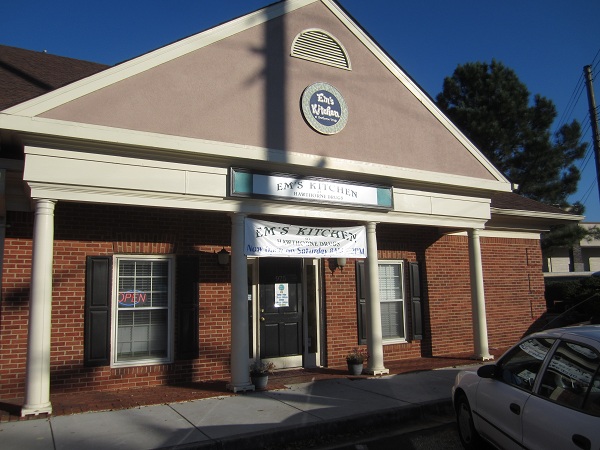 The time that passed since the review mentioned earlier has clearly worked out a few of the mentioned kinks in that article. Our food arrived promptly and was satisfactory to all (though I got the usual ribbing from my table mates about not wanting pimiento cheese) and the toddler got to try everything, while protectively hovering over his bowl of fruit salad with the sadly increasing cries of “no, mine!” I did get him to trade a grape for a bite of pimiento cheese grits, and if anyone knows what a hard bargain that is for a toddler to make (if your toddler doesn’t like fruit, imagine it was a goldfish cracker), they will have an idea of how much they might want to check this place out. We were pretty early, coming in as soon as they opened, but a number of people who were clearly regulars started trickling in to order breakfast as we got our food.

My sausage and cheese omelet was quite nice, though I should have had some potatoes with it. That, although regrettable, would have been unwise, considering the amount of eating we were planning for the remainder of the day. I had resolved to be good. Grant had a pressed sandwich with pimiento cheese, tomatoes, and bacon, and made no such resolution. This attempt to eat sensibly also prevented me from picking up any of the tempting scones laid out on the counter, so you readers in Athens should eat some on my behalf until I can make it back up there.