Back in August, Leslie from The Food and Me suggested that we meet up for supper at Cơm, the quite popular Vietnamese place on Buford Highway. It’s been doing good business for almost a decade and has been very influential both in the business world – when Nam Phuong opened, with its nice atmosphere, furnishings, and presentation, it was said by some to be an imitation of Cơm – and in making fans out of curious eaters. Leslie and I agreed that we should have more get-togethers with more bloggers, and then I hemmed and hawed and waited too late to properly invite people, but Food Near Snellville was able to make it, as did our friends and frequent fellow diners Vincent and Helen, and then Leslie got called into work and wasn’t able to join us. Boo!

Well, she missed out. Cơm may not be as popular as it once was, but it’s very good. The service was a bit disappointing – was it absolutely necessary to splash when pouring Vincent’s glass of wine on two separate instances? – but Marie and I certainly enjoyed the food.

In fact, Marie even went so far to say that her dish, the xả ớt gà, is a contender for the best meal that she’s had at any of the thirty-some Buford Highway restaurants that we’ve visited. You’ll find this on the menu as shaking chicken with lemongrass flavor served with rice vermicelli and she was in heaven. 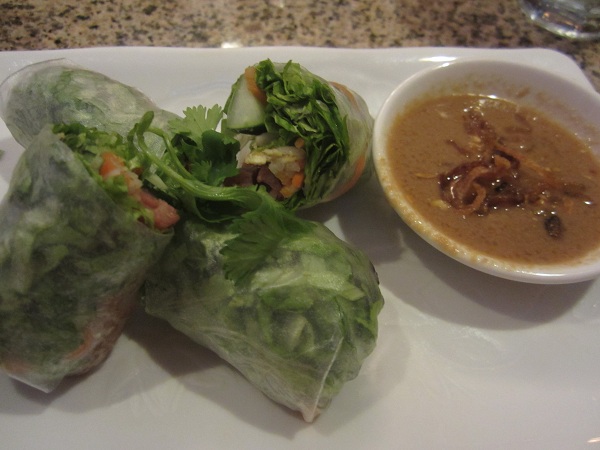 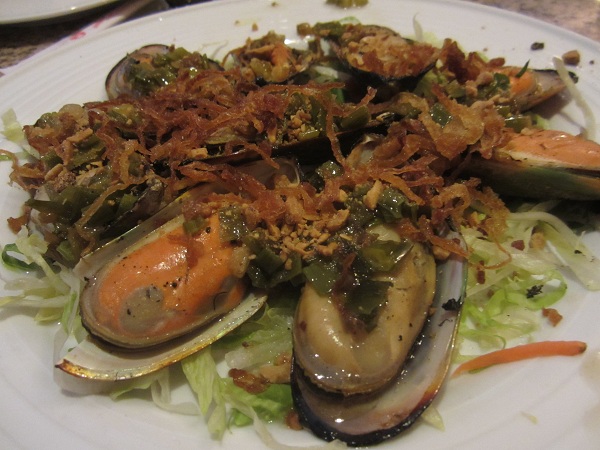 I was most interested in trying the Goi salad after reading Foodie Buddha’s review of the restaurant (linked below) and thinking that seemed the most promising. Lots of thinly-sliced fruits (apples, mangoes, and papayas) gave a very pleasantly sweet flavor that balanced the onions, chicken, and crushed peanuts. A couple of shrimp spring rolls with those and I was perfectly pleased. 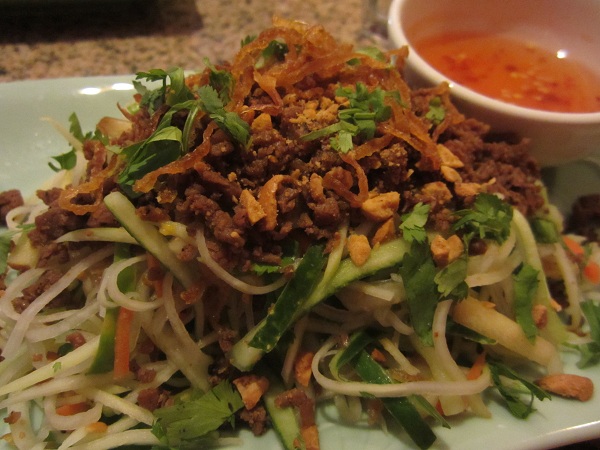 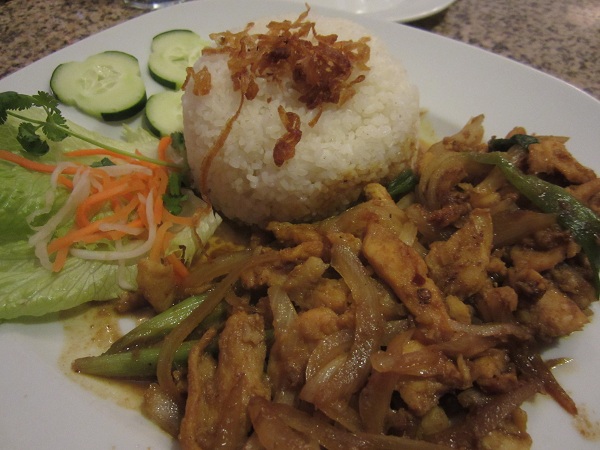 Helen suggested that Cơm was once a more traditional and authentic restaurant. They ate here regularly in the mid-2000s and knew the original owner. He sold the business in 2008, and there are now more fusion and American-influenced dishes on the menu. This came at the same time as they opened a second location in Dunwoody. But if they’ve evolved away from tradition, the food is still very good. We were really pleased with our meal, and Marie and I were honestly even more taken with it than we were the also very good Nam Phuong, which is said to be more authentic. But the company was so good, and the conversation so spirited, that nobody really left all that disappointed. FnS, as we call him in blogs, knows so darn much about everything that he makes every conversation more interesting.

While we didn’t agree with our friends about the quality of our entrees, one place where we find common ground is in that candy dish by the cash register. Nobody was certain what fruit flavor that hard candy was attempting to emulate. We just called it “the green death” and vowed “never again!”

Other blog posts about Cơm: